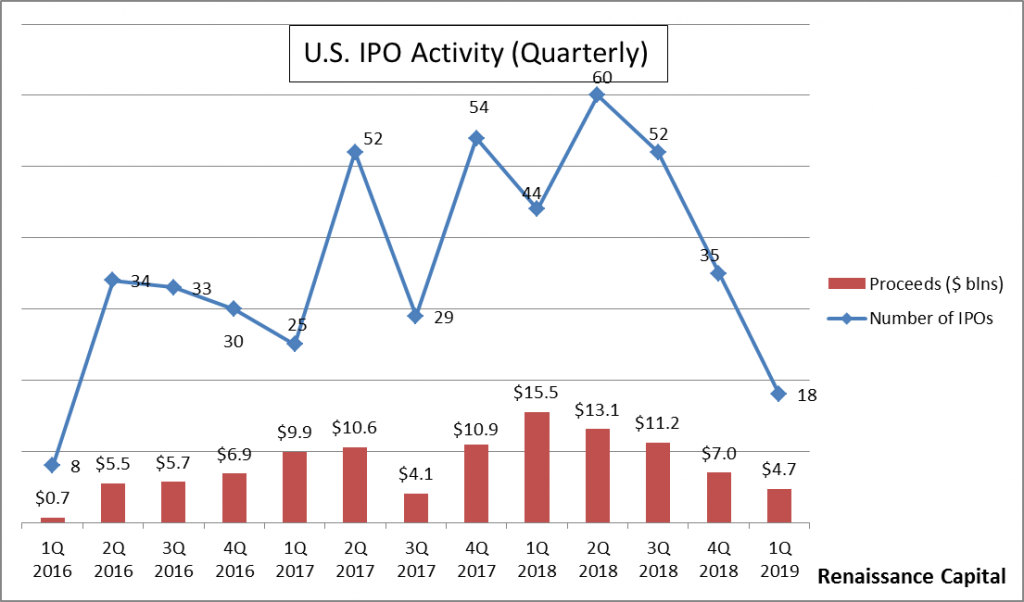 The one piece of good news about IPOs is the fact that they outperformed the overall US stock market during the 1st Qtr of 2019.  The Renaissance IPO Index rose 31.2% during the 1st quarter compared to a 13.1% gain in the S&P 500 Index during the same period.

The weak US IPO activity during the 1st Qtr of 2019 is not a surprise to most analysts as the US  government shutdown that took place during January delayed many companies filing plans.  The good news for the IPO market took place at the tail end of the quarter when Lyft’s IPO generated considerable investor interest.  Many analysts believe that the remainder of 2019 should be a strong year for US IPOs as a number of marquee names are expected to come to market including Uber, Pinterest, Palantir, Slack and Rackspace.

The projected pickup in 2019 IPO activity following a weak first quarter should boost earnings at many investment banks.  The big question is whether these gains can offset the weakness seen in research revenue at many investment banks caused by the implementation of MiFID II.  However, we suspect that the strength in healthcare and technology IPOs could encourage some sell-side firms to continue hiring equity research analysts, particularly in these high-demand sectors.