Despite MiFID II, some news suggests that bulge bracket investment bank Goldman Sachs is planning to increase its focus on single stock research.  However, other data reveals less commitment to the equity research product.

According to an article published last week by Bloomberg, New York based investment bank Goldman Sachs is planning to increase single stock research coverage by more than 20% to 1,200 stocks by the end of 2020 from fewer than 1,000 stocks two years ago.

Part of this expansion has been a build-up of the bank’s industry research ranks during the past year, particularly in the airline, biotech and homebuilding sectors.  In fact, the number of biotech analysts employed at Goldman has more than doubled in recent years enabling its biotech coverage to grow more than fourfold to about 90 stocks under coverage currently.

This plan to increase research coverage is surprising given the impact MiFID II has had on the research industry prompting some banks to trim both staff and coverage while others have shuttered their research departments altogether.

Jim Covello, Goldman’s global co-head of single-stock research explains this move, “One of the dynamics you’re seeing is that our clients are consolidating their spending and their consumption with fewer brokers.  And one of our goals in the counter-cyclical investing push is that we will be one of the brokers that our clients consolidate with. The idea is, we can get a bigger piece of what is overall a smaller pie.” 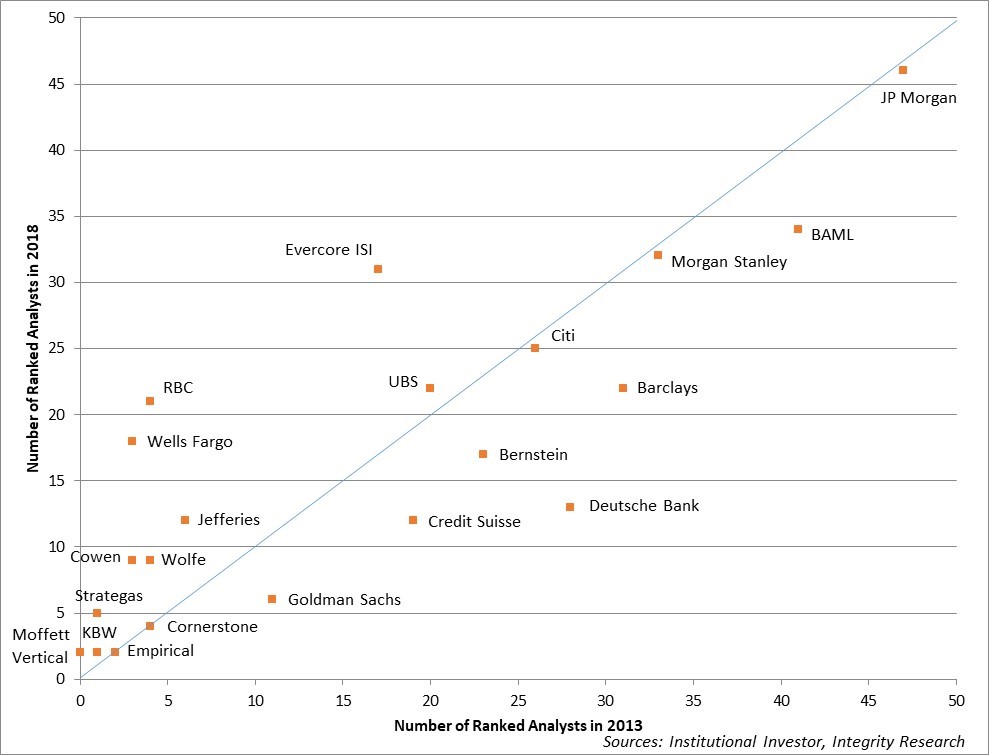 As is also clear from the chart above is the fact that Goldman Sachs has consistently employed fewer US-based II ranked analysts than any of its bulge-bracket bank peers.  The following chart also supports this assessment, showing that Goldman’s US research team has actually dropped from being ranked 11th in 2013 based on the number of All-American II ranked analysts to 16th in 2019. 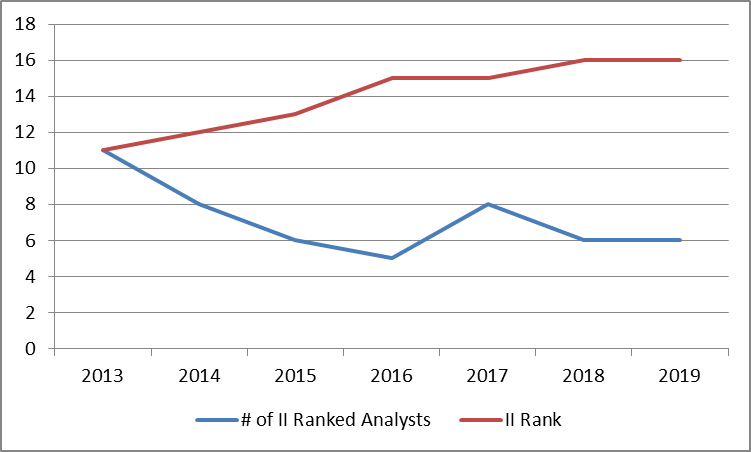 For many years Goldman Sachs has focused considerably less on its equity research business than many of its bulge bracket peers.  In fact, in 2003, during the Global Research Analyst Settlement, Goldman Sachs was one bank that talked about possibly spinning out its research business to establish a utility that could be leveraged by other investment banks.  It was also the first investment bank in 2007 to establish a unit to market independent research to its buy-side clients, called Hudson Street Services – a move that was copied by a few other investment banks.

This reduced focus on its investment research franchise is clearly evident in the data presented above showing Goldman’s All-American II rankings over the years.  Clearly, Goldman has not ascribed to the belief held by many of its peers that the number of II ranked analysts it employs directly translates into equity commission revenue or the amount buy-side firms are willing to pay for their research.

However, MiFID II seems to have changed Goldman’s views on the importance of its equity research franchise.  In a post-MiFID II world, institutional investors are not able to pay their brokers for their research based on commission volume.  Instead they need to independently assess the quality of the research they consume and pay their research providers accordingly.

Goldman’s decision to increase its research coverage at this point is based on their view that they can capture an increased market share of the research wallet by growing their coverage – particularly in certain high value sectors.  As we discussed in last week’s article on Research Innovation and Differentiation, Goldman has decided that one way to differentiate its research offering would be with its coverage universe.

It will be interesting to see if asset managers actually reward Goldman Sachs in what they pay the bank for its research going forward.  If they do, we will undoubtedly see Goldman continue to expand its research offering.  If they don’t we would not be surprised to see Goldman adopt other approaches to increase its research market share.