The transaction flow through commission sharing agreements has increased in the US over the last two years, according to Greenwich Associates.  In large part this is the result of US asset managers seeking to improve the efficiency of their commission spending as commission levels have flattened.  We expect CSAs to continue to flourish in the US, not just because of MiFID II’s unbundling provisions.

The proportion of U.S. equity trade commissions directed through CSAs has risen to 36% in 2016 from 34% in 2015 according to Greenwich Associates latest US equities survey. From 2011-2014, volume executed via CSAs had plateaued at 32% of overall volume, so the growth over the last two years is a significant new trend. 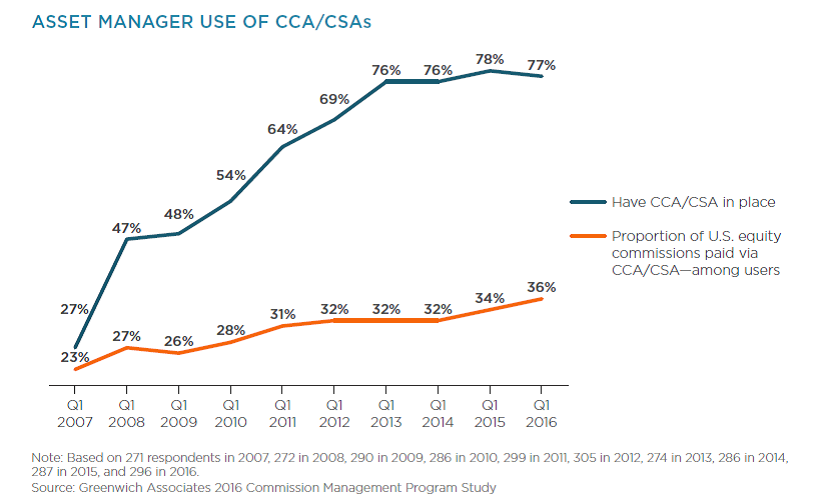 The trend is even more pronounced among larger asset managers, those with over $20 billion in assets under management, which are the heaviest users of CSAs.  For this category 42% of equity commissions are paid via CSAs, up meaningfully from 35% in 2015.  We know of some very large US asset managers who have decided to direct 100% of their commissions through CSAs, which is helping to boost the overall flows.

The trend was very different for the smallest institutional investors, who have reduced their CSA flows as they struggle to maintain relationships with large broker dealers.  As brokers have become more disciplined in enforcing their tiered service levels, asset managers with under $3 billion in assets under management have shrunk their CSA flows from 34% in 2015 to 32% in 2016.

For the 4th consecutive year the Greenwich survey has shown greater use of aggregators to manage CSA balances, from 43% in 2015 to 52% in 2016.  Commission management aggregators track balances, payments and reconciliations across multiple CSA accounts. In addition, many also offer compliance and other research management functionalities, such as broker vote tools. 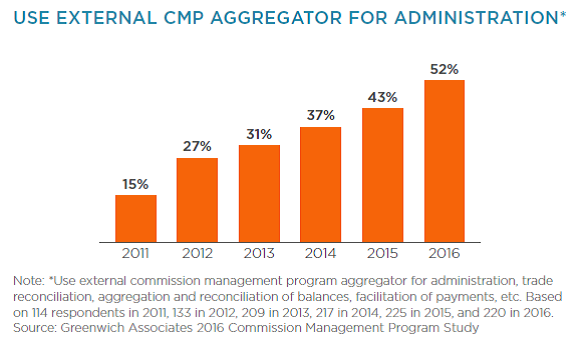 This trend is reinforced by European regulatory attempts to further unbundle commission payments.  The largest US asset managers tend to be global, and are seeking commission management solutions which can be implemented globally, increasing the appeal of CSAs.  UK regulators, with their insistence on regular sweeps to ring-fenced accounts, threaten to increase the costs of administering CSAs in the domicile they supervise, but will not deter US asset managers from a trend that pre-dated MiFID II.

The Greenwich survey also lends support to the industry argument that it was moving toward greater commission transparency absent regulatory attempts to accelerate the process further.  In the context of Brexit and Trump’s US election win, market forces may have more lasting impact than regulatory initiatives.