Layoffs on Wall Street surged in July to the highest monthly level seen since March, while hiring plans rose to the highest level seen since December of last year revealing a mixed overall jobs outlook as many bank executives remain concerned about low interest rates, weak commission revenue, and regulatory pressures on earnings.

According to the July Challenger, Gray & Christmas monthly Job Cuts Report released last week, the financial services industry saw planned layoffs surge over 320% to 2,143 layoffs from 509 layoffs announced in June.  The July layoff figure also represents a 199% increase from the 716 layoffs reported during the same month last year.  Over the first seven months of 2019, 15,088 layoffs have been recorded, 74% higher than the 8,667 layoffs seen during the same period of last year. 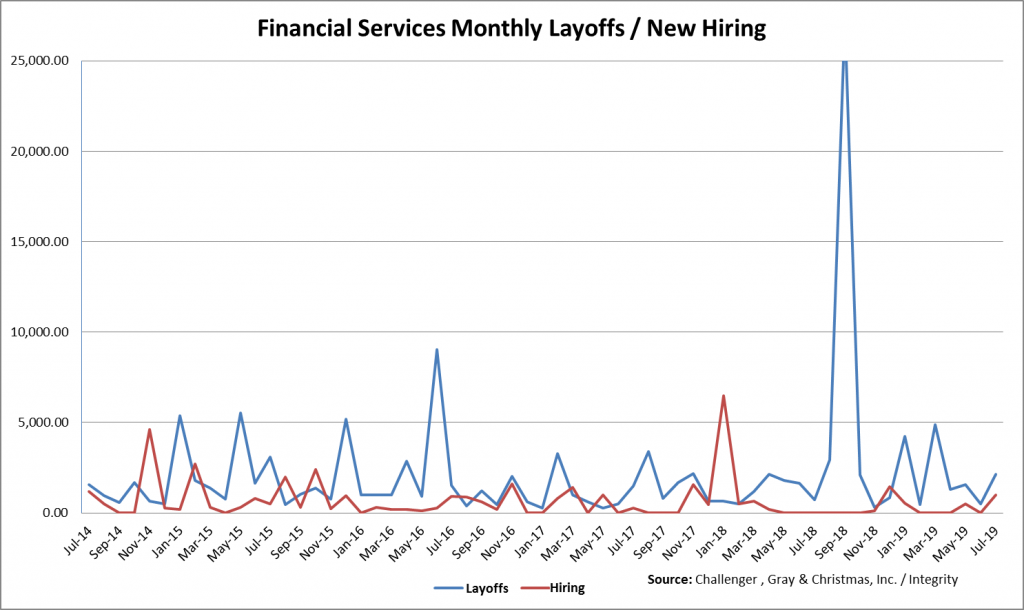 As you can see from the above chart, despite the monthly surged in hiring seen in July, new hiring continues to lag layoffs.  The 12 month moving average for new hiring on Wall Street currently totals 296 new jobs in July 2019, compared to the 12 month moving average for layoffs which is currently 4,052 layoffs.  In fact, the total net employment has shrunk by 45,064 jobs during the past 12 months, reflecting only one month (December 2018) when net employment actually grew by a paltry 588 jobs. This data clearly reveals the underlying weakness of the current Wall Street jobs outlook as management continues to delay new hiring while they try to reduce costs by shedding staff.

Last month, Deutsche Bank announced that it will cut 18,000 jobs by 2022 and will exit its equities sales and trading business to cut costs and improve its profitability.  The company also said it would keep a focused equity capital markets operation and plans to resize its fixed-income operations – its rates business in particular – and will reduce its risk-weighted assets related to those businesses by about 40%.

Late in July, Bloomberg reported that Citigroup is preparing hundreds of job cuts at its slumping equities and fixed-income trading units over the course of 2019.  As part of these layoffs, Citi is reported to let go of at least 100 jobs in its equities trading group, or almost 10% of that division.

The gain in July new hiring alongside the reported surge in layoffs indicates that the overall jobs outlook on Wall Street remains weak, as many financial services executives continue to try and “right size” their operations in an effort to keep a tight control on costs given anemic business conditions.

These developments suggest that overall hiring by sell-side and independent research firms is likely to remain weak for some time.  Although we would not be surprised to see some firms fill existing job openings (particularly in the healthcare and TMT sectors), we doubt many will look to grow the number of research analysts or salespeople on their staffs; particularly given the impact MiFID II has had on shrinking research revenues at most research providers.