Research unbundling is nearly upon us. The intense debate around its emergence will eventually benefit the whole financial ecosystem. However, evolution is often a hazardous journey – the rigorous examination of precisely how the new rules will manifest themselves has exposed many unintended consequences of MiFID II and thrown up unexpected challenges for the research business. What is certain is that many practices that were long-established under the ancien régime will not survive.

The problem with research

The flaws within the research world are well-known and have been so for a long time. The bundled model, where revenue generated by execution is used to finance research, has created an immense oversupply of written content issued by the sell-side – a recent report by Quinlan & Associates estimates that only 1% of the 40,000 reports posted weekly by brokers is actually read by portfolio managers. “Free” research evidently means that price transparency is virtually nonexistent, quality control has been largely forgotten, and, since sell-side analysts have never really had to fight for an audience, investment in improved distribution has been at a minimum.

The research business has been under constant  pressure since the financial crisis, which triggered the inexorable reduction of trading commissions. Frost Consulting estimates that total research budgets in global investment banks have halved since 2008 – down to $4B in 2016, and expected to be only $3.5B by the end of 2017. The reasons for this are structural:

Over the last 15 years, regulators have taken a progressively harder line over the inherent conflicts of interest around the bundling of research with execution. British businessman and politician Paul Myners first drew attention to these in 2001, when he issued a report on institutional investment in the UK. The final point in his introductory letter to then Chancellor Gordon Brown states:

“Finally, an important cost to pension funds, namely broking commission, is subject to insufficient scrutiny. Clearer and more rigorous disciplines could be applied to these costs, which are substantial.”

Since then, regulators from around the world have at various times made attempts to tackle this issue, though up to now only with mixed success. 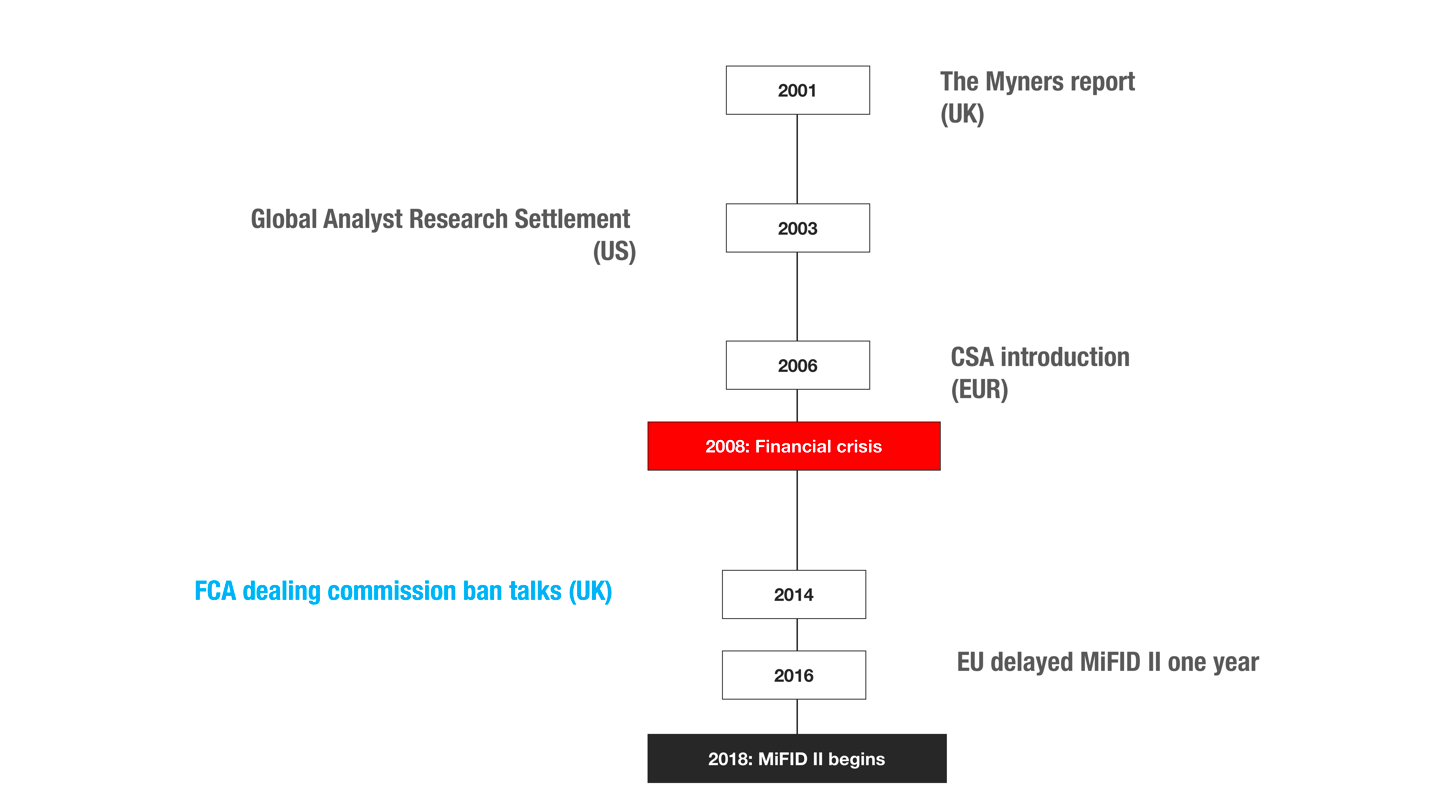 It took 10 long years for Europe to issue what many consider to the largest single regulatory change financial markets have ever experienced – in its entirety, MiFID II runs to about 20,000 pages. The overriding principle of the new rules is the protection of end customers, to be achieved by demanding the highest possible levels of transparency.

Back in mid-2014, when the FCA first announced their intention to ban the use of dealing commission to pay for research, lobby groups within the industry reacted vociferously. Not long after, the concept of the “Research Payment Account” (RPA) appeared, initially mooted as a replacement for the “Commission Sharing Agreement” (CSA). Its raison d’être was to ensure the separation of payments for execution and payments.

However, many were unwilling to allow the CSA to disappear without a fight, and they were aided in this by French regulators, the AMF. France’s asset management industry is the second largest in Europe and has around 650 investment firms, including a large number of small and mid-size companies. The CSA was used extensively in France, enabling such firms to afford research services. Many months and debates later, a compromise was reached that would allow the CSA to survive, provided much more stringent conditions were adhered to, and they were only to be used in conjunction with RPAs.

Early in 2017, asset managers began to reveal how they would pay for research under the new regime. Initially, The CSA/RPA route seemed the favored method, as at first glance it looked like the least painful option financially, despite its cumbersome mechanics. However, this September saw momentum move swiftly away from this solution, as asset managers realized that it would be far easier to simply absorb research costs themselves by going down the self-funded, or “P&L”, road. Choosing this path would hopefully kill two birds with one stone: Removal of the CSA/RPA “monster” with all its operational complexity, and increased pressure on smaller competitors that did not have sufficient financial resources to pay for research out of their own pocket.

A major round of consolidation in the investment management sector has already begun, and using regulation to inflict damage on competitors is just one of the weapons that asset managers will deploy in their fight for survival.

Even the largest asset managers will still face many challenges, as the purchase of research still has many unknowns:

Post MiFID2, more data will become more available, which will allow normal economics to work in the research world. In the meantime, the sell-side is trying to solve it biggest conundrum – how to price its research.

The art of pricing

It is well known that once MiFID II is enacted, the sell-side are obliged to price their research transparently. Despite this fact, and despite repeated requests from the buy-side, the discovery process has been slow, opaque and volatile.

In the sell-side’s defense, it has been extremely difficult to put a commercial price on the value of the research that they provide to their clients. Research has many components, and these parts are distributed widely across a typical investment bank. For this reason, research does not function very easily as a stand-alone profit center. This issue is perhaps best illustrated by the fact that whilst research budgets have halved in the past 10 years, research department has changed very little over the same period. Even if they have experienced a growing “juniorization”, research employees have been cut by 10 percent at the most.

However, from a technical point of view, many of the larger sell-side institutions have a major advantage over the buy-side, as they have built CRMs containing large amounts of data around both the research product itself and the consumption behavior of their customers. This has been far more difficult for the buy-side due to the lack of quantifiable data and may give the banks an advantage in negotiations.

The long-lasting research oligopoly of the sell-side might not get dismantled easily. A research pricing war has been brewing for a while and has now erupted for all to see. Investment banks have dramatically slashed prices, with institutions choosing to do this publicly, presumably for added effect. Many larger players are using their financial muscle to cut prices as far as they dare. Regulators are noticing, though it seems that they are not overly concerned as yet – a spokesperson for the FCA recently told the Financial Times that if the MiFID2 rules mean “customers are paying less for the same or better service, that is a good outcome”. 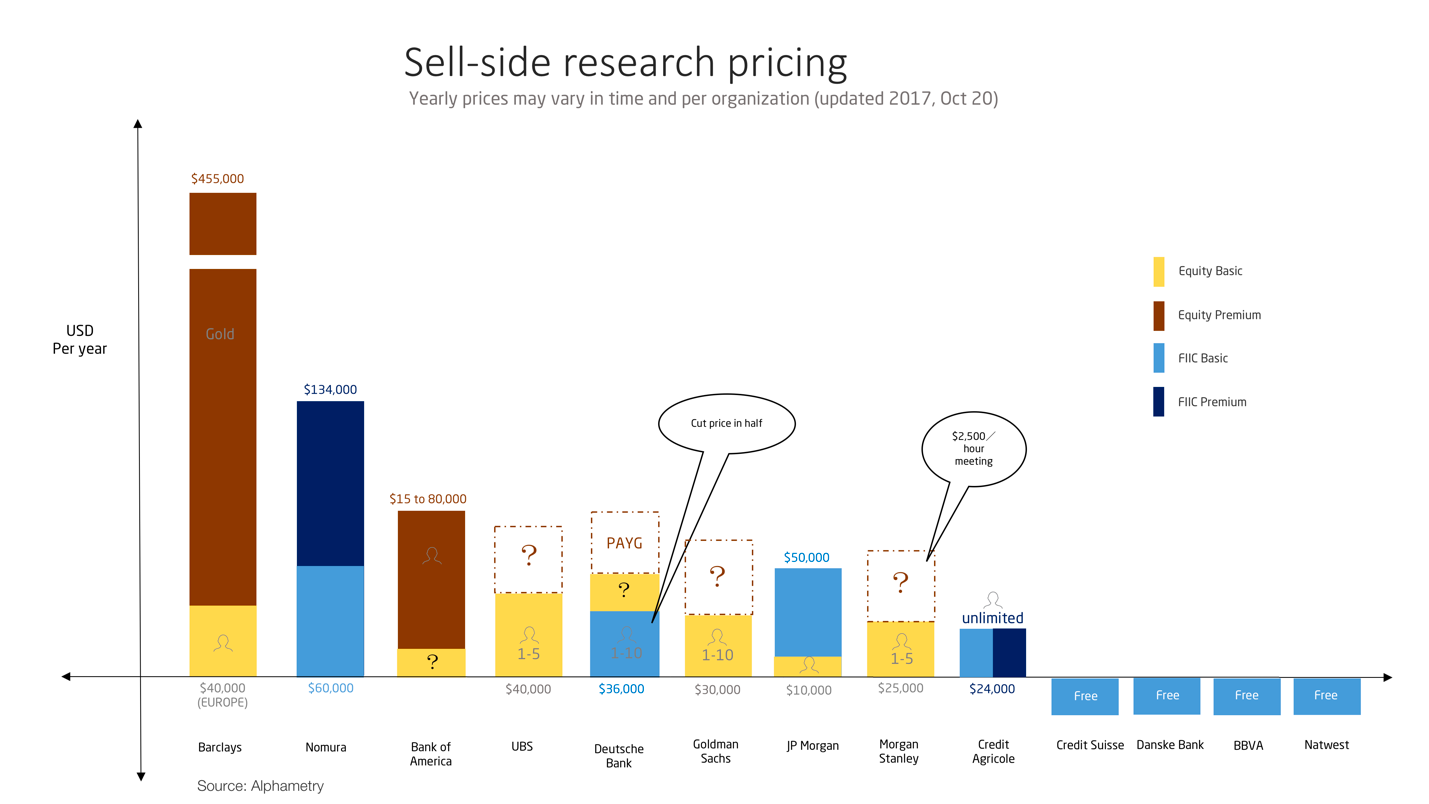 When prices for equity research portal are being slashed, and fixed-income research provided freely by more and more banks, the question becomes “How cheap is too cheap?”

But as the saying goes, the devil is in the detail – the mispricing of research at loss-leader levels by the sell-side will eventually create a major headache for the buy-side, and a potentially disastrous outcome for the nascent research industry. Research prices trending to zero will undoubtedly raise regulatory and structural challenges. The regulators have continuously pointed out that investment managers must make sure that the research they receive, including the price they pay, does not breach inducement rules. For now, investment banks seem to have made a clear tactical decision: market share first, regulatory fines later.

In reality, it is highly probable that the banks’ headline research prices are falsely deflationary. Written research available from their global portals is heavily discounted, in order to draw the customer towards much pricier interactions like calls, meetings or corporate access. The sell-side presumably envisages that falling prices, and the resultant lower quality of written research, will force asset managers to reach out to them for their more expensive services in order to capture alpha.

In this new context, a number of questions arise.

Is current research pricing driven by a new open market as the regulators were hoping for?  It seems not.

More importantly, based on what we are now seeing in the research market, does it create a more competitive asset management industry, as the FCA has repeatedly called for in its recent reports? The reality would suggest otherwise.

Surely, the investment research mutation is not a last minute sprint to the finishing line of January 2018 but has a long distance to travel still. The destination is unknown and remains in MiFID II creators’ hands.