Two thirds of asset managers and research providers expect spending on research to decline over the next three years thanks to new European regulation, according to a poll conducted at Bloomberg’s recent conference, MiFID II: Spotlight on Independent Research.

41% of the London-based attendees anticipated research spending to decline over 20%. The pessimism is largely being driven by concerns that new research procurement stipulations in the forthcoming MiFID II regulation will prompt greater scrutiny of research spending, leading to lower payouts. 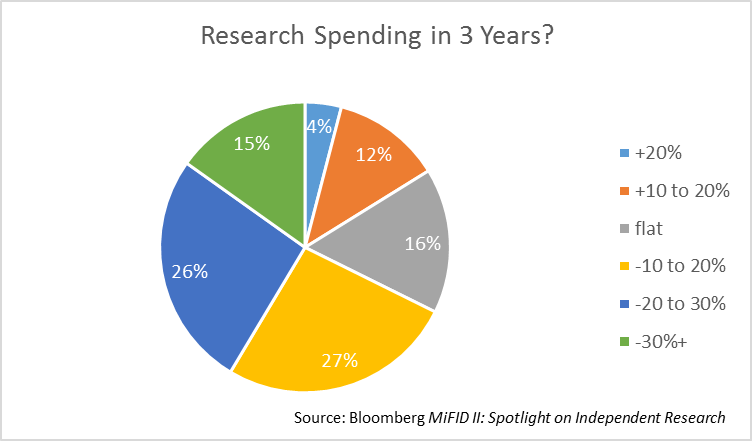 The Bloomberg conference, held January 27th, was standing room only, with over 170 attendees evenly divided between asset managers and research providers, whether investment banks or independents.

Concerns over research spending are prompted in part by potential changes in how payments are funded. Under current regulation asset managers are allowed to pay for research through client commissions, a provision which MiFID II originally sought to reform. Recently leaked drafts of pending rules [link requires subscription] suggest that asset managers will be allowed to continue to fund research through client commissions using commission sharing agreements (CSAs).

A majority of attendees expected to pay for research through CSAs, although 43% expected to pay either through a separate research fee or from their own P&L. The diversity of views reflects the uncertainty surrounding the pending regulation given that the final rules have yet to be released. 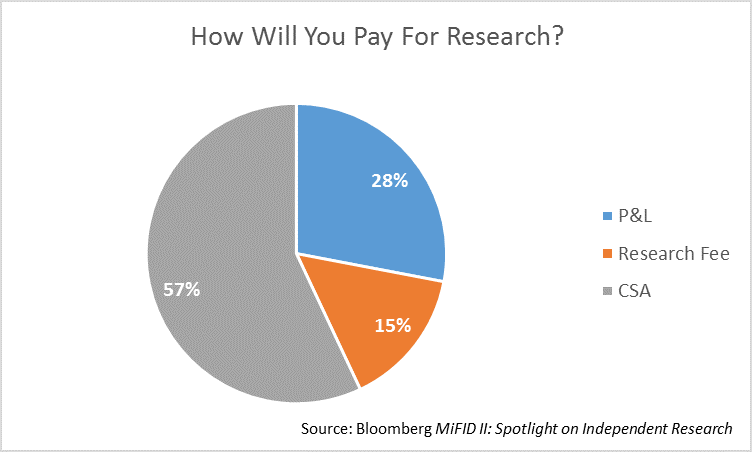 Panelist Nick Anderson, Head of Equity Research at Henderson Global Investors, believed that MiFID II would effectively be a ‘mandate for CSAs’, which parse bundled research payments into execution and research components.

Our view has been that the impact of MiFID II’s inducement provisions will be less dire than expected, especially now that it appears that CSAs will be allowed to fund research payments. One should never underestimate the inertia involved in changing long standing processes. Within asset managers, compliance and commission management staff will be pushing for reform, but it is the portfolio managers and traders who make things happen.

This is not to underplay the extent of change attendant with MiFID II. We came away from week-long visit to London with a greater appreciation for the magnitude of change even in the more watered-down version of the rules (more on this anon). However, we still think that the rate of change will be more evolutionary than revolutionary, muting some of the immediate risks to the  downside.

This doesn’t make us a bull on research spending. Even if MiFID II does not initially put a big bite in research spending, as we suspect, it is a negative influence, along with a downward trend in commission spending overall. Active managers are under pressure on a variety of fronts, not the least being the rise of passive investing. In becoming more competitive, active managers will continue to rationalize, and research spending will not be immune.