Investment banks provide seven buy recommendations for every sell recommendation on average, according to data from Investars, a performance measurement firm.  In contrast, independent research firms average an even distribution between buys and sells. 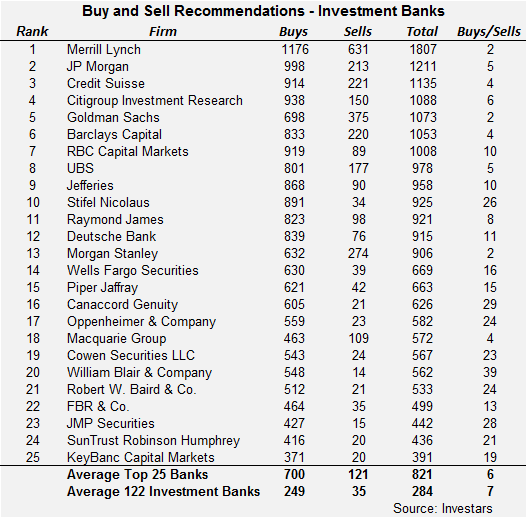 Among investment banks, the major firms tend to have disciplined ratios between buys and sells across the sectors they follow.  Merrill Lynch, Goldman Sachs and Morgan Stanley maintain ratios of approximately 2 buys for every sell.  Other bulge firms typically maintain single-digit buy:sell ratios.

The investment bank with the lowest ratio of buys to sells is London-based Liberum Capital, which maintains more sells than buys according to Investars statistics.  Exane BNP Paribas has the next lowest, with near-parity between buys and sells. 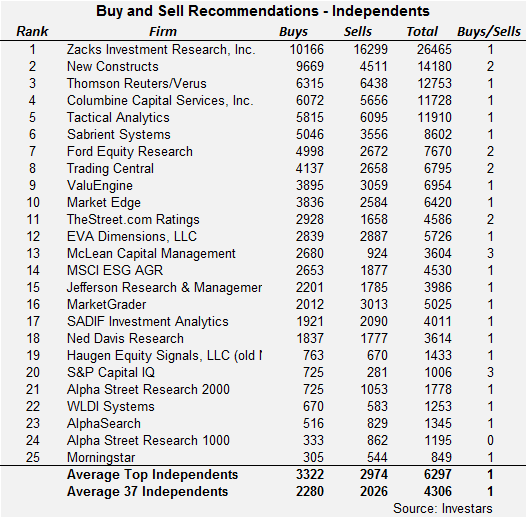 Independents show parity between buys and sells in the Investars statistics thanks to a large percentage of quantitative research firms which balance buys and sells.  Smaller independent boutiques often have higher ratios of buys to sells.  Argus Research has 32 buys for every sell recommendation.

Most independent boutiques have single-digit ratios similar to the bulge bracket firms.  Longbow Research and Northcoast Research have 7:1 ratios, Vertical Research is 5:1 and Wolfe Research is less than 2:1.

A high percentage of buy recommendations is not necessarily an indication of conflicts between banking and research.  Most investors are long-oriented, and prefer buy ideas to sell ideas.  There are other motivations, as outlined by a former Credit Suisse analyst recently [access requires subscription], such as corporate access which is prevalent among both banks and independents.

Although buy/sell/hold recommendations are largely ignored by institutional investors, major investment banks have implemented policies to enforce greater parity, which is largely consistent with the ratios maintained by the smaller independent boutiques.