According to Coalition Development, research analyst headcount at Bank of America, Barclays, BNP Paribas, Citigroup, Credit Suisse, Deutsche Bank, Goldman Sachs, HSBC, JPMorgan, Morgan Stanley, Societe Generale and UBS plunged 8% from 3,800 analysts at the end of 2018 to 3,500 analysts at the end of June 2019.  This decline puts analyst headcount on pace for the sharpest annual decrease since Coalition starting collecting the data in 2012.

Many market watchers suggest that this shrinkage in analyst headcount is being driven primarily by the research unbundling mandate associated with MiFID II and the resulting 20% to 30% drop in research spending that has taken place.  However, the Coalition data suggests this may not be the only factor in play.  Since the implementation of MiFID II at the beginning of 2018, analyst hiring has fallen 10%. 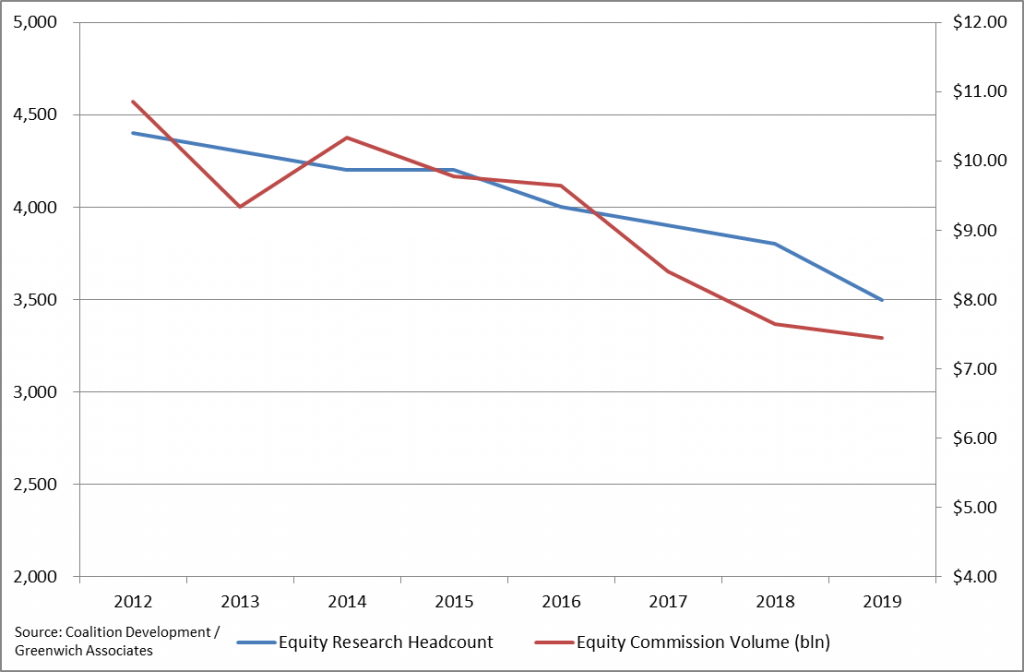 However, this decline has merely been the continuation of a longer-term trend in shrinking analyst headcount.  Since 2012 when Coalition started collecting this data, analyst headcount at the 12 largest investment banks has dropped 20% from 4,400 analysts to 3,800 analysts in mid-2019. This decline started well before the implementation of MiFID II.

One factor which we believe has contributed to the decline in sell-side analyst headcount over the past seven years has been the drop in equity commissions seen over the same time period.

In the chart above, we see that according to Greenwich Associates, U.S. equity commissions have fallen over 30% from $10.9 bln to less than $7.5 bln between 2012 and 2019.  This drop in equity commission revenue has been caused in large part by the increased adoption of technology, falling equity commission rates, and plunging trading volumes.

Given the fact that sell-side equity research has traditionally been funded by equity commissions and IPO revenue, the squeeze in commissions should eventually have an impact on research – particularly if IPO revenue has not risen over that period to offset those commission declines.

We are not arguing that MiFID II has had no negative effect on sell-side analyst headcount.  We are just pointing out that decline in analyst headcount has been taking place for quite some time and that other factors could have played a part in this trend.

However, we do suspect that the move to a cash market for research in Europe brought on by MiFID II is likely to convince many executives at investment banks that they are unlikely to recoup any research revenue shortfalls in future years like they could when commissions drove research payments.  Research budgets and P&L payments brought on by MiFID II have probably capped many firms’ research payments, particularly in an environment where investors are shifting from actively managed to passive investments.

Consequently, the only way to improve the profit picture for sell-side research which is experiencing shrinking revenue is to cut expenses.  This means that research management is likely to continue to squeeze both analyst compensation and headcount in the years to come.