A study titled “Do Hedge Funds Profit from Public Information?” published last week by three Rice University assistant professors identified the IP addresses of institutional investors and then analyzed the investors’ file downloads from SEC servers for the period from 2003 to 2017.  The report  by Professors Alan Crane, Kevin Crotty and Tarik Umar concluded that firms accessing one or more SEC filings in a month exhibit 1.5% percent higher annualized abnormal returns in the subsequent month and that above-median users generate 2% higher returns per year. 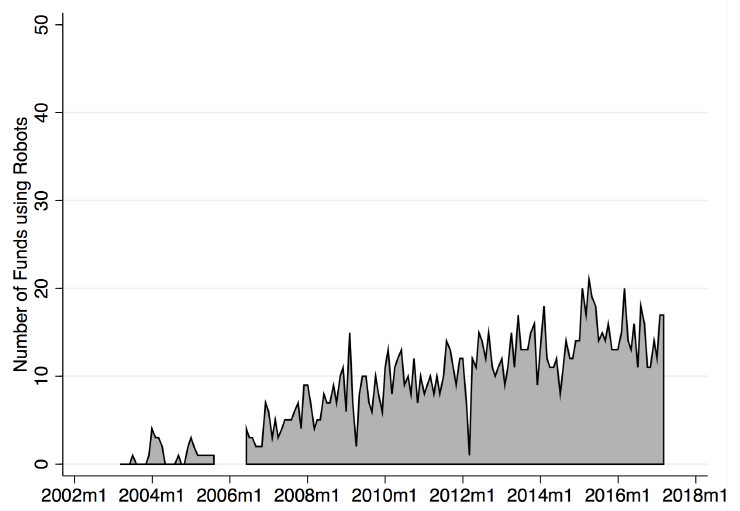 The paper noted an increase in the number of investment firms scraping the SEC filings during the period.  The authors classified the firm as scraping if it accessed more than 50 files during a day with the median time between downloads less than 30 seconds.

The paper also examined the download patterns for three large quantitative investors:  Renaissance Technologies, AQR and PanAgora, a subsidiary of Putnam Investments.  Both Renaissance and AQR had relatively consistent levels of downloading over the period while PanAgora’s volumes were more variable over time. 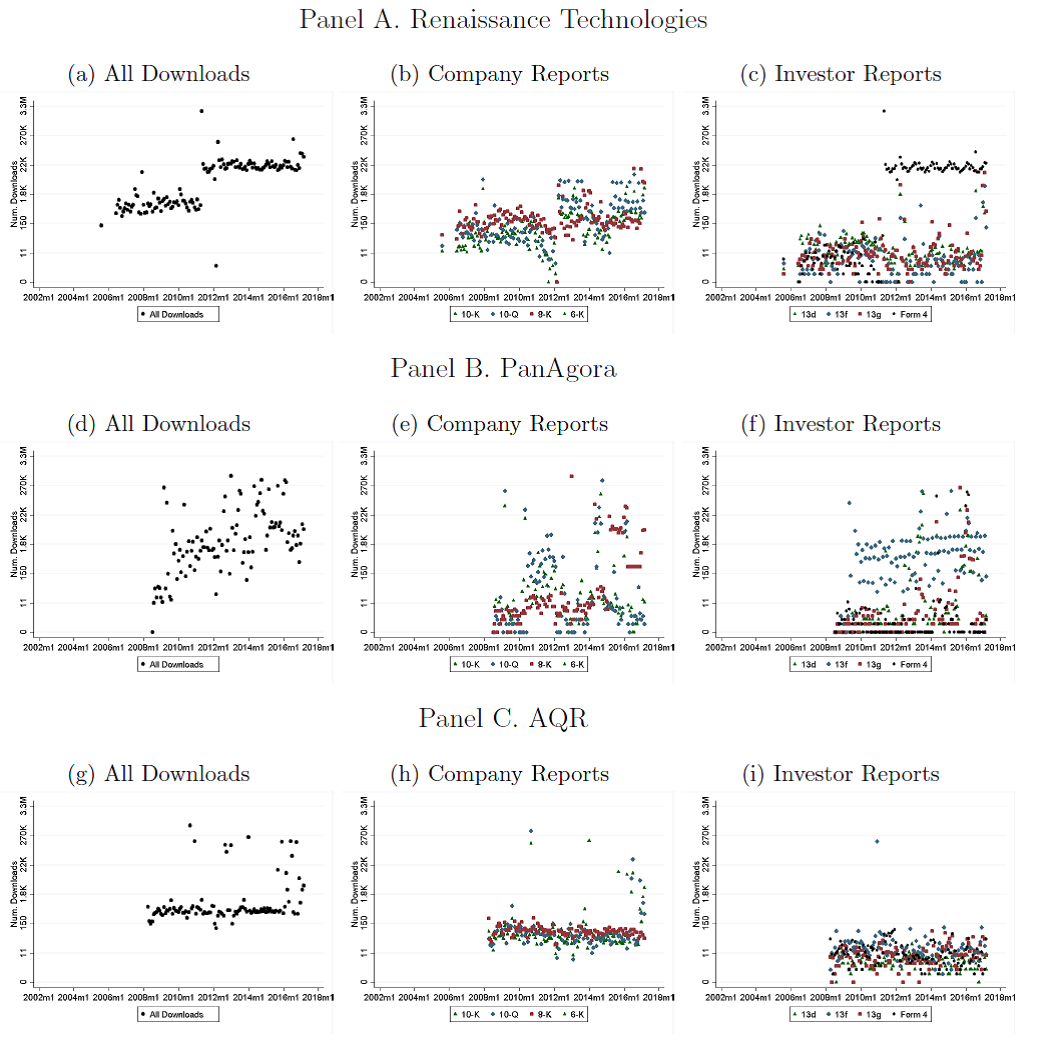 We used data from the study to examine patterns within the various SEC filings, since the information contained in the filings has differing research applications.  Form 4 data is used by researchers to track purchases and sales of corporate insiders which can be leading indicators of price movements.  Forms 13-D and 13-G track holdings over 5%, and can be relevant for event-driven strategies.  Form 13-F contains cross-sectional portfolio holdings and is used to analyze investor behavior in purchasing and selling stocks.  In our examination of the data, we were particularly interested in the intensity with which investors used the different varieties of SEC data. 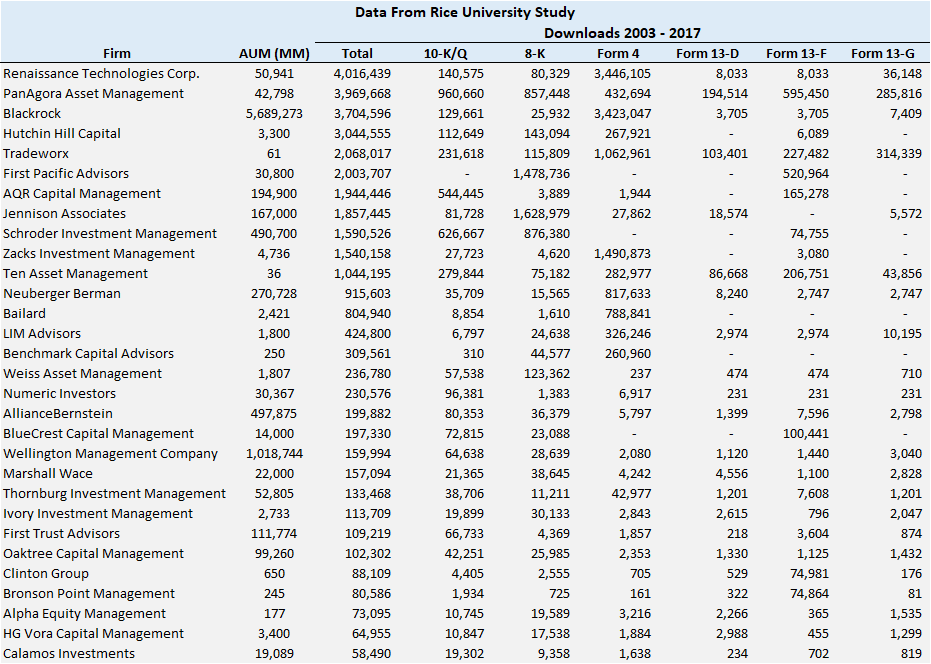 Renaissance Technologies, PanAgora, Blackrock, Hutchin Hill Capital — a $3 billion hedge fund that shut down at the end of 2017 — and Tradeworx, a tiny quantitative hedge fund, were the largest users of SEC filings in the Rice University study.

Among the top SEC filings users in the study, the firms which focused predominantly on financial statement information tended to be discretionary managers such as Schroder’s, Jennison Associates and Alliance Bernstein.  While these managers might offer hedge fund products, it is a stretch to classify the overall firms as hedge funds, as the Rice University study does.  One use case for such download activity would be creating and maintaining internal databases of as-reported financial data.

Firms predominantly downloading Form 4 data for insider transactions included Blackrock (not really a hedge fund), Renaissance Technologies, Neuberger Berman (not a hedge fund), Asian hedge fund LIM Advisors and Bailard, a California-based hedge fund.  Within the usage activity identified in the study, Form 4 data attracted intense interest by more firms than other types of SEC data.  We suspect some firms apply machine learning to Form 4 data to identify insiders with track records of timely purchases or sales and to filter out tax-induced selling and other types of noise in the data.  The study erroneously identified Zacks Investment Management as a hedge fund.  Despite its name, Zacks is a research firm which re-markets Form 4 data along with other research products.

The firms identified in the study did not extensively download information about large purchases of stock contained in 13-D and 13-G filings.  Although 13-D filings document moves by activist investors, delays in the filing period undercut the utility for investors, which may be one reason for the relatively scant attention.

Hedge funds Bronson Point Management, Clinton Group and Bluecrest Capital Management predominantly focused on analyzing the portfolio holdings of other institutional investors documented in 13-F filings.  At a minimum, the data can be used to identify trends in purchases and sales of stocks or to track competitors.

Despite shortcomings, the Rice University study was creative in mapping IP addresses to analyze SEC downloading activity, giving some insight into buy-side usage patterns.  We remain skeptical of the study’s headline conclusion that SEC downloading generates abnormal returns because the SEC data was clearly only one input into the investment process, as the study authors even admit.  Nevertheless, the distinct approaches taken by different types of investors is of interest.