The following is an article that was published by Alternativedata.org, an informational website about alternative data supported by YipitData and other contributors.

We compiled a dataset of alternative data full-time employees (FTEs) on the buy-side to analyze the various recruiting trends impacting institutional investors. As competition for data talent heats up, it is essential to understand the landscape, background, and cost of these professionals.

Our methodology leveraged LinkedIn and the AlternativeData.org network to scan through the 14k buy-side funds to find individuals that are focused on alternative data initiatives full time. We first identified all data-focused individuals within discretionary funds and then screened for all false positives, including employees that work with traditional datasets (e.g. macro, business, market, etc.). We then reviewed each individual’s profile to confirm their focus on alternative data and arrived at a final database of 163 funds that employ a total of 340 alternative data FTEs (Figure 1).

This methodology has some limitations, suggesting that the actual number of data FTEs may be even higher:

How quickly is the landscape evolving? 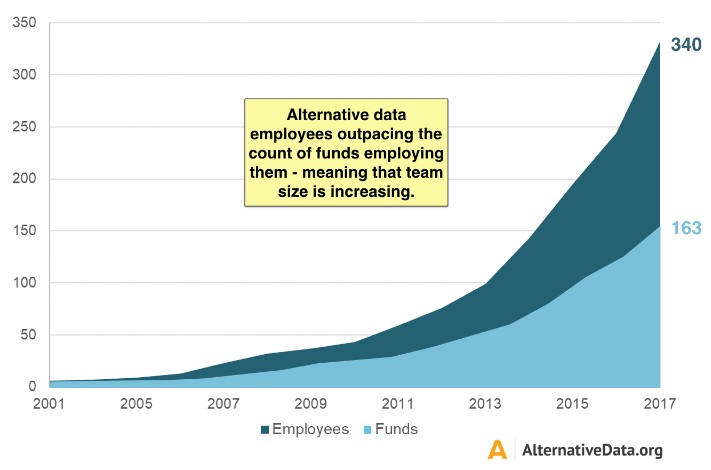 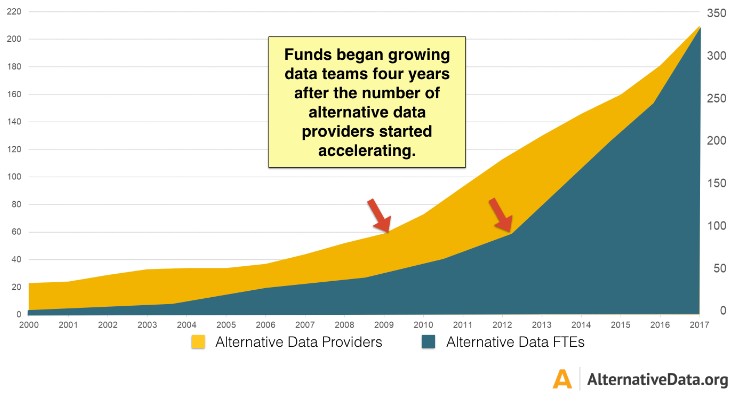 What is the composition of alternative data FTEs?

We investigated the different roles that comprise the data FTE sample to understand its composition (Figure 4). We grouped various different job titles into 6 major categories to better identify trends across each function. We found that 59% of FTEs are in Data Analyst and Data Scientist positions. These are also the functions that have been growing the fastest, at 3x the rate of the other data categories (Figure 5). 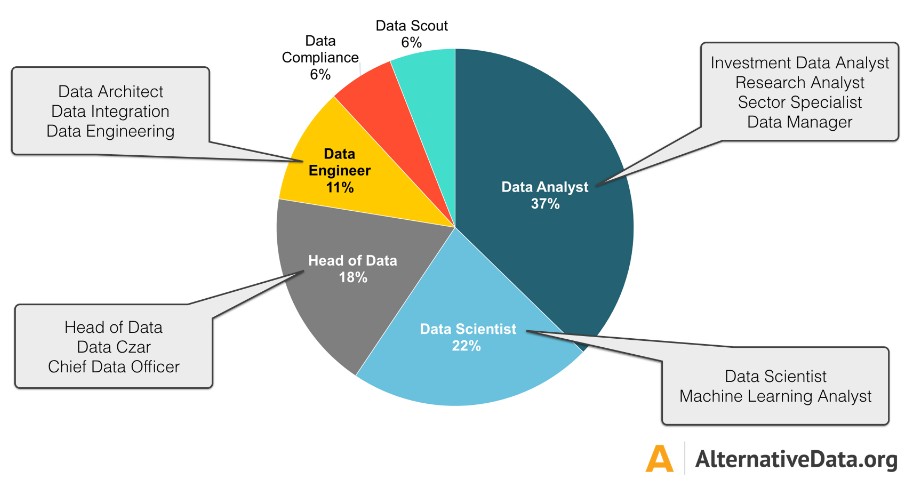 Note: Data Scout refers to roles in which the primary responsibility is data sourcing. 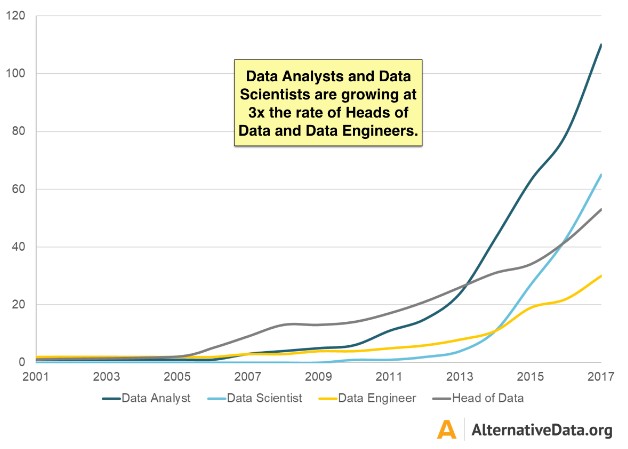 Not just hedge funds in this game.

An important takeaway from looking at the types of funds in the dataset was that hedge funds are not the only ones that have been adding alternative data FTEs. Long-only funds are adding considerable amounts of these employees. We identified several long-only funds that have built full data teams or have many alternative data FTEs, including Schroders, Fidelity, Capital Group, Neuberger Berman, T.Rowe Price, and Invesco.

Given long-only investors experience much longer investment cycles (~5 years) than their hedge fund counterparts (quarterly), it is reasonable to assume that they have not yet seen and validated the impact of alternative data in their investment decisions. As a result, we expect that several more long-only funds will commit to building dedicated data teams in the near future as more alternative data is incorporated and its ROI is demonstrated.

We examined the dataset to identify profile characteristics and trends that would help in recruiting alternative data skill sets. We first looked at the educational concentration and previous employer type of the four main functions to understand the general background of each function. Most functions had relatively high concentrations of STEM backgrounds, except for Heads of Data, who were almost entirely from traditional investment backgrounds (Figure 6). We expect that the background of Heads of Data will diversify with time, as Data Analysts and Data Scientists with STEM backgrounds progress into leadership roles.

How do these employees differ from typical buy-side talent?

When compared to the average educational background on the buy-side, alternative data FTEs hold significantly more STEM degrees, but less Ivy League degrees and MBAs (Figure 7). It is evident how the industry profile will change significantly in the coming years. Recruiters will need to adapt, as few will have extensive networks of referrals for this skillset. 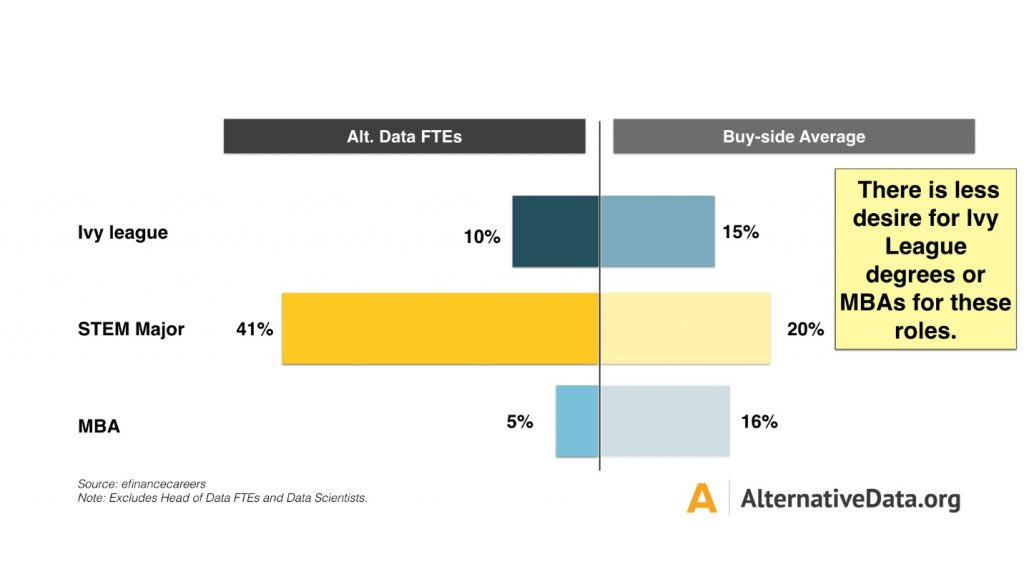 Figure 7. Alternative data FTEs have more STEM degrees than the average buy-side employee. Much lower concentration of Ivy League or MBA degrees for these roles.

We also examined education levels across the different functions and found that graduate degrees are highly concentrated to Data Scientist positions (Figure 8). Over 40% of Data Scientists hold a graduate degree. While we expected this given the technical sophistication of that role, one could also conclude that you probably do not need to hire a PhD or graduate student for the majority of these roles. 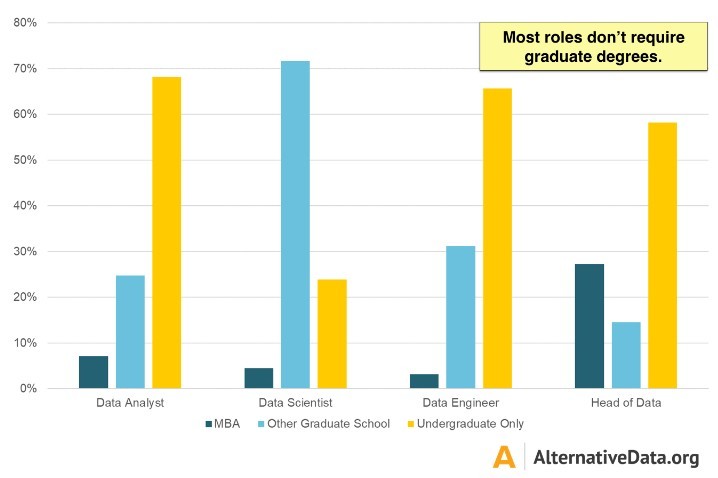 Figure 8. Only Data Scientists have a high concentration of graduate degrees amongst alternative data FTEs. Most roles don’t require a graduate degree.

Where to find alternative data talent?

In 2012, most talent came from other funds (69%) or the sell side (20%). In 2017, the Sell-side has remained largely the same (19%), but sourcing from other funds has decreased substantially (48%) (Figure 9). Over the last 5 years, funds have substantially increased their hiring from tech companies, academia, and data providers. We expect these channels to continue diversifying and growing as the industry seeks to fill the increasing demand for the alternative data skillset. 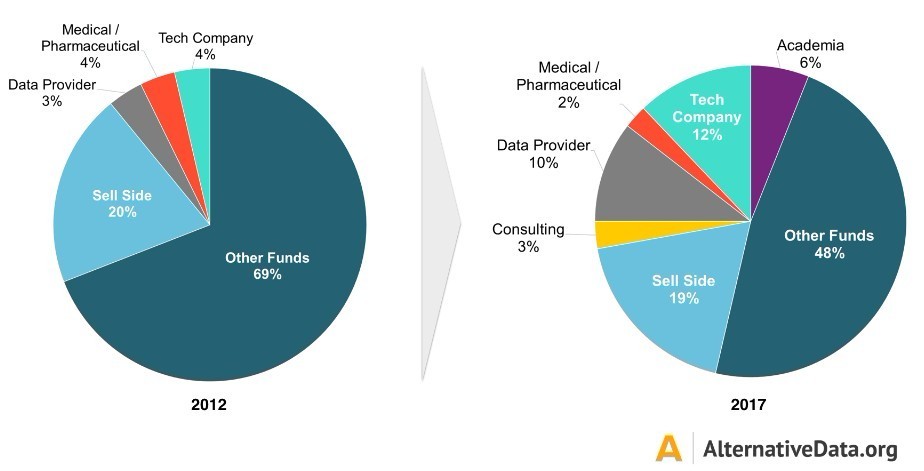 How experienced are these professionals?

We looked at work experience and found that the majority of funds hired individuals with 11+ years of experience (Figure 10). Few funds are currently building out these teams with recent college graduates. This will change over time, as the alternative data skillset is only around seven years old. As the use cases for alternative data grow, we expect funds to invest more in hiring and training younger talent for roles on their data teams. 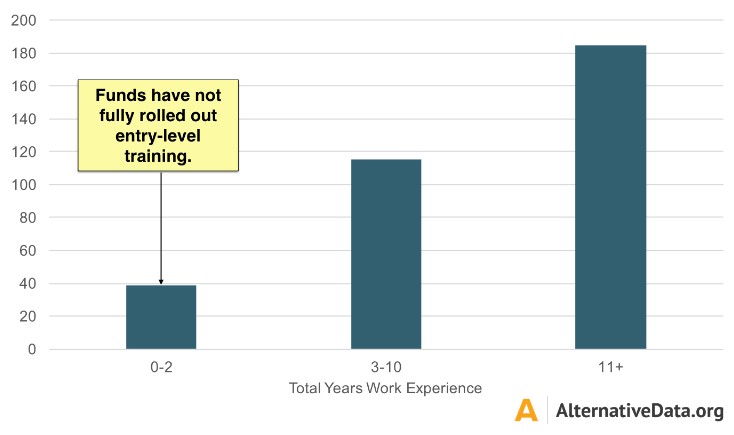 Figure 10. The majority of alternative data employees have 11+ years of experience.

How much will this cost?

Finally, we gathered compensation figures to estimate the cost of building a small, but complete, data team at a fund (Figure 11). We estimated that a team comprised of each of the functions and three Data Analysts would start at $1.5m – $2.5m, at an entry level. With consideration for insurance, benefits, overhead, etc., it is likely that the true cost could be twice as much. Moreover, from the size of some teams and anecdotal research, several top funds are already spending over $10m on alternative data teams.

We are just getting started.

Competition for alternative data talent on the buy-side is escalating and has yet to hit full stride. As data sources grow, integration improves, ROI manifests, and more long-only funds begin building their data teams, we expect demand for this skill set to accelerate. One clear takeaway is that there is not enough alternative data talent within the institutional investor industry to sustain the growing demand. We expect to see funds training younger candidates and increasingly competing with tech and other industries to hire top talent. As demand grows, the cost of attracting top talent out of other fields will increase as well.

See our article How to Integrate Data Analysts, Data Engineers, and Research Analysts to learn more.