Deutsche Bank was the leading sponsor of investment conferences in the first quarter of 2018, edging out Citibank and JP Morgan, according to investor relations platform provider Virtua.  London’s popularity as a conference venue declined when MiFID II strictures took effect.

The 452 first quarter events tracked by Virtua’s StockConferenceCalendar service were a 32% decline from 667 conferences held in the fourth quarter of 2017, largely attributable to seasonality since the first quarter tends to see fewer conferences generally.  The number of conference organizers increased in the quarter to 355 from 245 providers the previous quarter.

The top three sponsors – Deutsche, Citi and JP Morgan – each organized over twenty conferences during the quarter, collectively representing 14% of the total.

New York remained the most popular location, garnering 11% of the total first quarter conferences, down slightly from a 14% share the previous quarter.  London remained the next second most frequently used venue, but its share fell from 12% to 8%.  The decline may be partly due to MiFID II, which reportedly has made European asset managers more leery of attending conferences amid uncertainty about newly imposed research fees.

Hong Kong, San Francisco and Singapore were the next most popular locations. 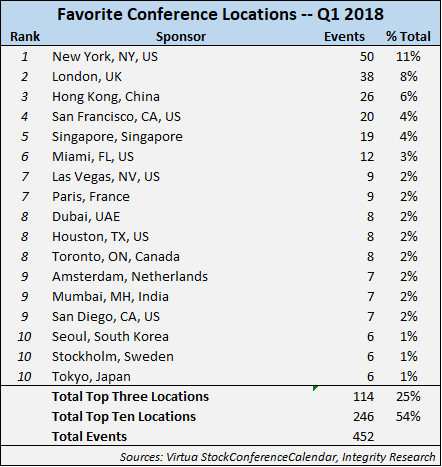 High touch services such as conferences and other events are one of the more highly valued research products. Large investment banks have been among the most active conference sponsors because they have been traditionally paid through commission trading.  Although it is still too early to tell for sure, the fall-off in London bookings may signal that MiFID II’s requirement to charge fees for research services is having a dampening effect on conference sponsorship in Europe.