Dark matter in the markets

According to MFS Investment Management chief economist Erik Weisman, PhD, and research analyst Sean Cameron, CFA, 175 securities contributed to half of the net results in 1975. In 2015, this figure had fallen to just 30 companies. They explain that economic activity has become more concentrated among fewer companies. The winners in today’s markets are larger, older, and less dynamic than their competitors.

Concentration is having a major impact on portfolio construction, especially when giant caps are performing so well. “There’s an ecosystem in which you have an increasing wedge, or gulf, between the winners and the tail of everyone else that’s losing which makes the impetus on choosing the right names that much more important,” Cameron said during a presentation at the recent CFA Institute Fixed Income Management Conference 2018.

An ecosystem of similar financial expertise or background hurts investing too. In the past 10 years, the number of CFA certified analysts has risen by over 150,000 around the world. They are bright, well-educated brains but using similar tools. They are fed the same financial data at the very same time, and conduct ‘exclusive’ interviews with the same corporate executives on the same concentrated universe. The results are an identical, undifferentiated research.

The active particles of passive investing

Abundant and ubiquitous, is the relevancy of research information changing?

The price formation of equity markets is more and more driven by factor or rules-based investing strategies. Passive investing means the largest cap prices are less driven by information asymmetry but more by automated statistical process. A tracked index member gets the same notional allocation regardless of the underlying company quality. The worst companies will follow the best in a bull market and vice versa. This high correlation is further exacerbated by quantitative algorithms translating this tendency as the norm.

Unlike fundamental investors, passive funds don’t buy nor contribute to financial research. When they hold stocks, they don’t vote either. Proxy voting data from 2016 show that they vote with management 97% of the time. This creates governance blind spots when stock buybacks, executive compensation or practices may go unchecked by boards.

Passive strategies feed off and deeply disrupt the active investing approach where undervalue is no longer driven by the wisdom of the crowd. They can also bring new inefficiencies where companies that are ineligible for index inclusion may be cheaper than those that are included. Companies that don’t fit statistically but have hidden value in disruptive business models or future assets will be missed by computers but spotted by human investors.

Mid-caps escape this paradigm shift. Yet, they continue to suffer from a lack of interest.

The distribution of analysts’ coverage is skewed towards big names and contributes to portfolio contraction. Analyst coverage statistics in Europe highlight this phenomena which has been accelerating since 2012. 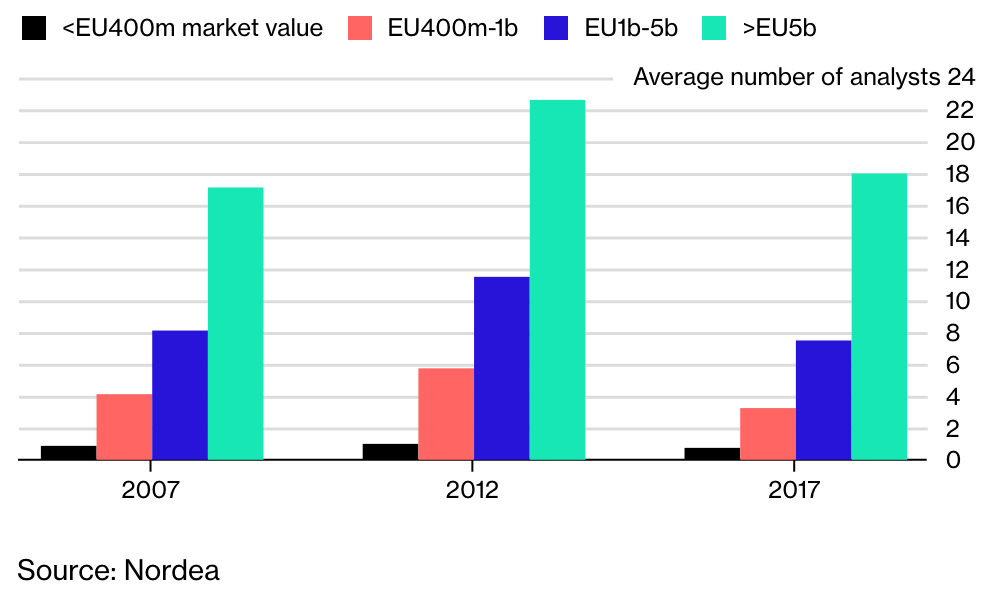 A long-term survey by association AMAFI about the smaller securities coverage in France between 2005 and 2017[1] illustrates the fragility of the European investment research industry. Key findings are:

They conclude that, since MiFID2 fragilizes research providers’ economic conditions, disappearing providers might no longer be replaced.

But does analyst coverage matter?

Most of the literature on analyst coverage deals with US firms where financial markets globally play a greater role in firm financing than in Europe. A recent academic paper studying 1,687 small and middle listed firms in Belgium, France, Germany, Holland, Italy and Spain[2] shed light on the crucial role of analyst coverage for the economy. It concludes that:

Financial analysts’ coverage is key to create a context of economic growth.

The fourth dimension of economies

European policymakers agree with regulators that “research plays a vital part in capital markets. In particular, small-and mid cap companies can draw real benefits from research coverage as investors seek out stocks with long-term potential.”[3]. Small companies are the engines of growth both in terms of GDP and labor demand. They are the primary actors driving Clayton Christensen’s theory of disruptive innovation as well as tomorrow’s winners.

Economic studies following the 2008 financial crisis demonstrated that the more intermediated financial systems are, the weaker the growth rate and the longer to emerge from crisis. The idea of a European “bank bias” has emerged. Yet, the capital markets are struggling with a smaller pipeline of initial public offerings[4]. Exchanges notes the main factor explaining the decline in the number of IPO is the decline of smaller companies coming to the market. Star sectors such as technology with great investment appetite can simply avoid public offerings and benefit from good credit conditions or private placements.

By removing the brokers role in corporate access or creating conditions for less research, MiFID2 is affecting the cost of capital of the smaller issuer population. It is already harder for equity stories to reach investors ears. Looming European ESG rules in 2019 will benefit companies with enough financial resources to collect and deliver (and audit, in the case of France) a myriad of non-financial data. ESG is reasonably creating better financing conditions but larger companies might be the only ones to reap the benefits.

Small firms’ financial constraint shall be alleviated by increasing their following by more analysts. Active managers need to be invested in those less-followed, un-indexed names. Independent research providers that examine these ignored ideas will be critical to surviving the next market decline and create genuine opportunities. Before it is too late, regulators must take notice. Policy corrections and new models are needed to reboot the European investment research market. When banks’ research derailed from the Internet bubble in early 2000, the Global Analyst Research Settlement managed to set aside a $450M USD pot for independent research. A tiny contribution to future GDP.

The time is now. Research unbundling is morphing into an historic opportunity to finally correct resource unbalances in our capital markets ecosystem, where:

Let’s not miss this opportunity.