Investars collected performance data on 145 research providers for the period from April 1, 2014 through March 31, 2017 on which we have based our analysis.  Investars calculates buy recommendation performance by tracking the buy recommendations as if an investor had invested equal amounts of cash into each stock in the research firm’s buy portfolio. A buy remains a buy until changed to a hold or a sell.

FIG Partners, a boutique investment bank which tracks community banks, had the best 3 year buy performance, based on a limited number of buys. Its recommendations were accompanied by moderate levels of risk, with a maximum drawdown of -18%, the same as the maximum drawdown for the S&P 500 during the period.  However, the 17.8% volatility of FIG Partners’ buy recommendations was significantly higher than the S&P’s volatility of 13.2%.

Sandler O’Neill, a NY boutique investment bank focused on the financial services sector, benefited from the post-election surge in financial stocks, garnering the second-best buy recommendation performance over the last three years.  The recommendations had a higher maximum drawdown of nearly 20% and a standard deviation of 15.8%.  Ford Equity Research, a quantitative research provider which acquired Columbine Capital Services in 2013, had the third-best record for buy recommendations. 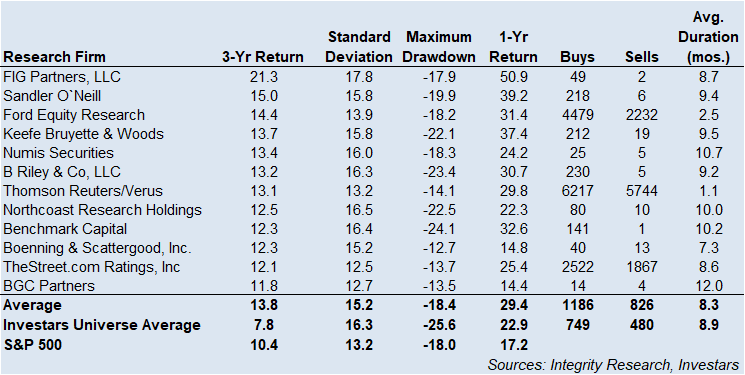 The top twelve firms had better performance for their aggregate buy recommendations than the S&P’s 10.4% return for the three years ending 3/31/17.  However, it is important to remember that the performance analysis does not include transaction costs.

Half of the top twelve firms are boutique investment banks, and half are independent research firms, including two brokerage firms which do not offer banking.

Of the top twelve performers, quantitative researcher TheStreet.com Ratings had the best risk/return profile for its buy recommendations. Its maximum drawdown was significantly better than the S&P 500 (-13.7% vs. -18%) and the 12.5% standard deviation of its recommendations was lower than the S&P’s 13.4%.  Broker BGC Partners, with a small research group, had the second best risk profile.

The last three years have been a generally positive environment for stocks, and the last twelve months even more so, despite increased levels of volatility. Therefore, it is revealing to examine the 1 year returns.

The number of buys and sells distinguish the model-driven research firms from the boutiques.  The quantitatively oriented firms—Thomson Reuters/Verus, Ford, and TheStreet.com—have broad coverage combined with typically shorter durations associated with their recommendations (TheStreet.com being an exception with an average holding period of nearly 9 months).

This is the third consecutive quarter that Atlanta-based FIG Partners has topped the buy recommendation list.  The community-bank specialist’s recommendations are showing blistering 1-year returns, suggesting that its performance track record is enduring.  Nevertheless, as the new Trump administration struggles to make good on its promises to reform financial regulation, market enthusiasm for the financial sector may cool, dampening the performance of financial specialists such as FIG Partners, Sandler O’Neill and Keefe Bruyette and Woods.