The following is a guest article written by Estimize Founder and CEO Leigh Drogen. This is the first of a three-part series examining the rise of quantitative investing and how it is transforming discretionary asset management.

Six months ago I found myself in our Estimize office sitting across the table from a hedge fund portfolio manager who said something I honestly couldn’t believe. According to this PM who runs a $500M long/short book at a large multi-manager fund, he was taking a data science course at night, after work. He told me, “If I don’t learn how to do quantitative analysis I’m not going to have a job in two years.” A second said the same thing to me a week later.

Two weeks after that I received an email from the “school” providing that very course, inquiring if I could teach a data science class, specifically for finance, to 25 members of a hedge fund who had contracted them.

These are just a few anecdotes among many in the absolutely massive transformation taking place right now within the discretionary institutional management industry. Discretionary managers have woken up, and are now scrambling to understand what’s taking place and how they must change in relation to it. Many will not survive the shift. Others will take advantage and be better off for it.

This series takes a deep dive into the following themes and how institutional managers can begin to effectively redirect themselves:

On June 20th, Estimize will be hosting the L2Q (Learn to Quant) Conference, a one day seminar designed for discretionary institutional PMs, analysts, and traders who know they need to move quickly and efficiently towards building quantitative processes. Segments will be taught by preeminent buy side, sell side, and unique data experts with vast quantitative investment experience at Two Sigma, PDT Partners, WorldQuant, Wolfe Research, Deutsche Bank, and others.

But before that, let’s take a deeper dive into the topics above, and why we felt a conference was necessary to explore them.

Looking back, it’s hard to understand why anyone was willing to give most discretionary fund managers money in the first place. The truth is, most PMs were simply playing with beta, whether it be momentum, mean reversion, value, growth, sector or market cap. Managers were leveraging these far more often than they were actually generating alpha. Now we can all argue whether correctly timing the use of betas is in itself alpha, but that argument is moot because the vast majority of PMs were unsuccessful at this in the long run and eventually blew up.

The greatest trick the industry ever pulled was making LPs believe that they could consistently leverage beta and not get caught with their hand in the cookie jar, giving up years of returns in a matter of months. Over and over, fund managers took their “two and twenty” to the bank in the years they happened to be on the right side of that equation. Then they blew up. Instead of fighting back to their hurdle, they just closed shop and opened up a new one, somehow convincing investors to play the same asymmetric game of risk once again. Heads I win, tails I take a vacation for a year and someone gives me another coin to flip later.

Don’t get me wrong, there are managers who have proven track records of not blowing up while playing with beta, and some even generate true alpha, but they are few and far between. Good luck picking the correct fund manager.

Why did it take the market so long to wake up? We can start with the great answers from friends of mine like wealth manager, Josh Brown. He fully understands the social and egotistical aspect of being invested in these funds, not because it’s the rational thing to do, but because of the accompanying prestige. The same can be said for managing your own personal portfolio– it’s something to talk about at a cocktail party.

And while it seems our current political climate echoes the movie Idiocracy, financial market education and investor behavior have actually taken a huge leap forward since the ‘08 crash. I find it interesting that retail investors actually got smart before pension funds, pulling money from active managers, closing their brokerage accounts, and investing in passive low cost ETF strategies.

As for the tens of thousands of small RIAs, why would I give them my money if I can buy a smart beta ETF for 20bps that does basically the same thing they were for 100bps? You’re gonna tell me that all those mom and pop RIAs managing $40M are executing those smart beta strategies as efficiently and accurately as iShares? Please.

It’s only a matter of time before Betterment or some other robo-advisor allows its clients to algorithmically allocate a portion of their portfolio to smart beta ETFs. Heck, I wouldn’t be surprised if one of them also provided the ability to use simple, proven, market timing overlays in order to rotate in and out or long and short certain smart beta strategies.

Hedge fund PMs have to realize that even though they are in last car on this disruption train, the conductor is coming to clip their ticket as well. They will either evolve or die, like any other industry disrupted by better efficiency. I think it’s obvious that there will be far fewer of them as most will not successfully shift to generating alpha.

Let’s clear something up, there’s no such thing as “passive investing”. The words we use matter because they form the basis for how we think about things and the actions we take. (The developed western world is ripping itself apart over a “war on terrorism” because, for propaganda purposes, we decided to say we were fighting a war on a military tactic even though you don’t have to study war theory in school like I did to know you can’t win a war against a tactic.)

All investing is active, even the decision of how to weight an index, what goes into that index, and how to allocate your capital amongst different asset classes. Just because the computer keeps your allocation levels static does not mean you’ve abdicated responsibility for investment decisions. This is why I’m such a big fan of smart beta, because it does away with the ignorant notion that you can avoid making a decision on beta to begin with. We all have to, so we might as well make that decision in an informed and active way.

In any event, we’re going to continue to see massive flows of capital out of ‘active’ long only mutual fund and long/short hedge fund strategies and into these indexed products. The question on everyone’s mind is, how will this affect the market? My best guess is that we’re not going to see the downside of massive systemic risks some are warning about when everyone is indexing. The latter part of 2016 and beginning of 2017 prove that even with all the indexed money, correlations can still drop quickly when macro factors evolve. After the 2016 election, cross-asset correlations that have existed for the past decade began to break down as pictured in the charts below.

Exhibit 1: Assets with below average correlation to S&P 500 and below-average volatility 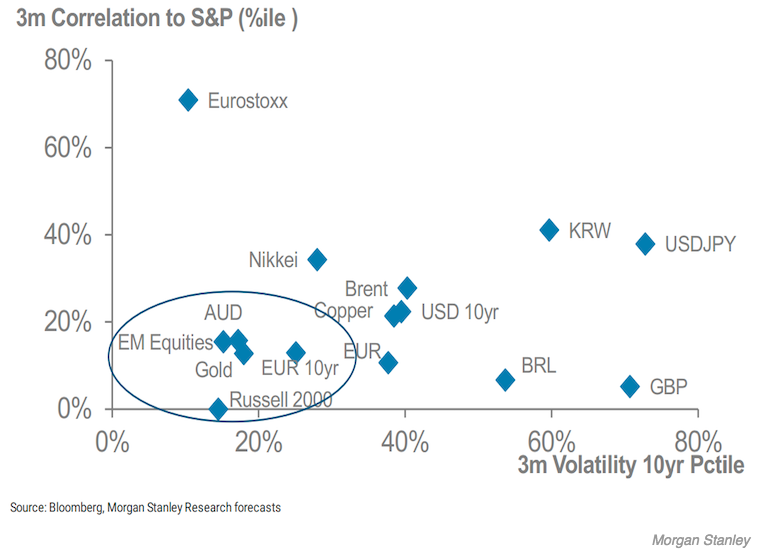 In the next installment, we’ll examine the dynamics which are causing a shift in assets from discretionary asset management to systematic investing, the new arms race that the quants have fostered, and how discretionary managers are beginning to respond to the new environment.  To go to Part 2 of this series, click here.

Leigh Drogen is the founder and CEO of Estimize, an open financial estimates platform which facilitates the aggregation of fundamental estimates from independent, buy-side, and sell-side analysts. Prior to founding Estimize, Leigh ran Surfview Capital, a New York based quantitative investment management firm trading medium frequency momentum strategies. He was also an early member of the team at StockTwits where he worked on product and business development. When he's not staring at rectangular lightboxes, Leigh can be found on the ice rink playing hockey, behind a grill, or off in search of waves to surf around the world.