As sell-side research production falters, expert networks are seeking to fill the gap.  Major US expert network Guidepoint Global is ramping up a new ‘Insights’ product to offer events and transcripts curated by former equity analysts, in addition to a growing set of alternative data.  As with other expert networks, Guidepoint’s overall hiring continues to grow apace.

The new Insights service includes moderated teleconference calls, meetings, surveys and a library of transcripts.  The product is managed by analysts with buy-side and sell-side experience at firms such as Millennium Management and Glenview Capital.  LinkedIn registrations indicate that Guidepoint has experienced analysts covering the healthcare, consumer, technology, industrials, credit and policy sectors.

The firm is actively recruiting for fourteen new positions in the group, including four senior analysts, two junior analysts and three associates.  Three of the four senior analyst positions are consulting roles seeking buy-side or sell-side analysts with a minimum of ten years’ experience to cover stocks in the healthcare, industrials and one of the following sectors: energy, technology or consumer.  The analysts will also moderate teleconferences and review teleconference transcripts for quality.  Analysts who perform well will be offered full-time positions.

The new Insights initiative has elevated Guidepoint’s overall recruiting levels in our latest sample of the firm’s open positions.  Total open positions have grown from 28 as of July 2015 to 40 as of May 2017 to 55 as of April 2018 to 73 currently (excluding nine intern positions).   We did not sample in 2016. 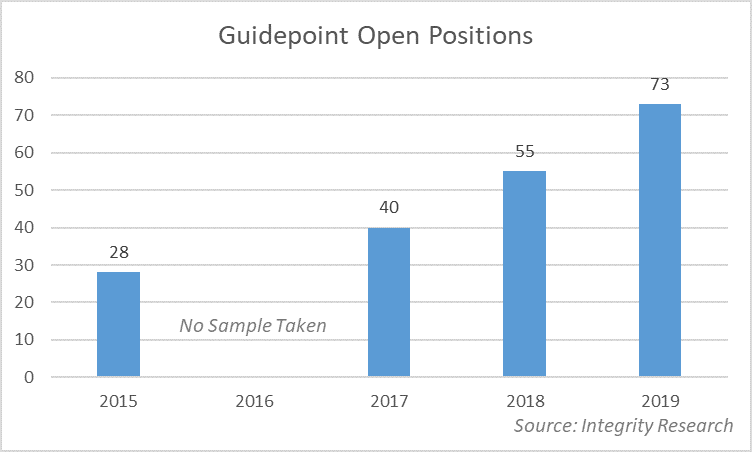 Most of the increase in open positions is the result of new hires for the Insights product, but Guidepoint is also growing its core client service area which provides white glove service to users.  With the advent of the Insights product, the function has been renamed from ‘Research’ to ‘Client Service’.   The role involves both supporting clients and identifying experts best suited to client requests.  Recruiting for other functional areas, including sales, human resources, IT and operational areas such as finance and compliance have been relatively stable over the last three years. 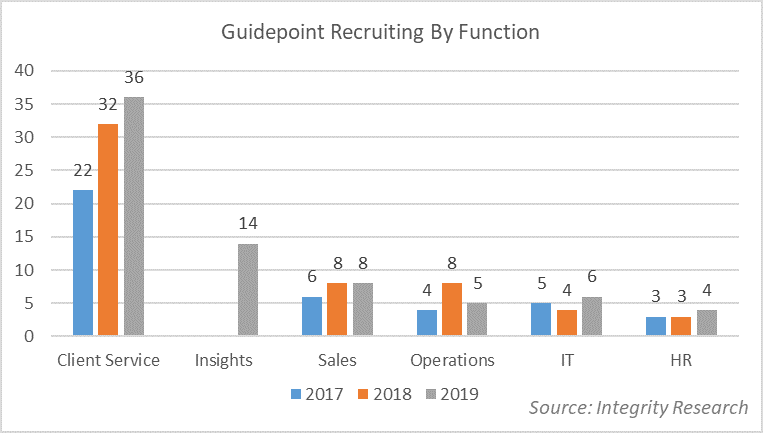 Recruiting is increasing in all regions, with the biggest change being in Europe, where Guidepoint is seeking to fill thirteen positions in London and five in Düsseldorf.   The US remains the largest area for new staff, with the majority in the firm’s New York headquarters (28) followed by San Francisco (6) and Boston (5).  Asian recruiting is dispersed over five offices: Singapore (6), Hong Kong (4), Shanghai (2), Tokyo (2) and Seoul (2).

Guidepoint Global was founded in 2003 as a healthcare-oriented expert network named Clinical Advisors and it retains a strong healthcare orientation.  Unlike other leading expert networks which have primarily relied on organic growth, Guidepoint has been willing to acquire competitors.  It purchased Vista Research in 2009 to become the second largest expert network after industry leader Gerson Lehrman Group.  It bought Düsseldorf-based Innosquared in 2015 and absorbed Quanton Data the following year.

Guidepoint also differs from competitors by having a predilection for data.   Its TRACKER service, which provides monthly data on segments of the medical device and pharmaceutical sectors, was first launched in 2006 with data on pacemakers and stents.  The product is now being marketed alongside its new weekly frequency Qsights Alpha service.

Guidepoint is not the only expert network beefing up its buy-side content.  London-based Third Bridge has been aggressively growing its ‘Forum’ service, which like Guidepoint Insights focuses primarily on teleconferences and transcripts for the buy-side.  In our Q&A with Third Bridge CEO Emmanuel Tahar a year ago, he singled out the firm’s Forum service as a strategic area for growth as the firm targets expanded market share in what he termed the $10 billion investment research marketplace post-MiFID II.

Although Guidepoint is the second largest US expert network, it has been challenged by Third Bridge and its UK rival AlphaSights.  Both firms have annual revenues in excess of $100 million and have been growing over 30% per year, in large part through expansion in the US.  Third Bridge now has more employees than Guidepoint (880 as of December 2018 compared to Guidepoint’s 750+ currently).  We suspect that if Guidepoint has not already been surpassed by its UK counterparts, it will be shortly.  Which is perhaps why it is adopting a page from Third Bridge’s book.