According to a private jobs survey, layoffs on Wall Street dipped for the second consecutive month in March suggesting that the overall employment picture is continuing to improve.  However, a more detailed look at this data suggests that the jobs outlook is not as rosy as some might think as banks continue to right size their organizations due to a sharp decrease in mortgage loan delinquencies, low interest rates and shrinking profit margins.

According to the Challenger, Gray & Christmas monthly Job Cuts Report released earlier this month, the financial services industry saw a 23% decline in planned layoffs from 1,800 layoffs announced in February to 1,381 layoffs announced in March.  Despite this improvement, the March layoff total represents a 98% surge from the 698 layoffs reported in March 2014.  Over the first three months of 2015, layoffs at financial services firms are 44% lower than the total seen over the same period last year.

Unfortunately, the improvement seen in March layoffs was not evident in new hiring.  During March, financial services firms announced a measly 300 new jobs to be filled, an 89% drop from February’s 2,700 new jobs reported.  This March total was a 100% increase from 150 new hires announced in March of 2014.  Over the first three months of this year, new hiring has totaled 3,200 jobs – up significantly from the 679 new jobs announced during the same period in 2014. 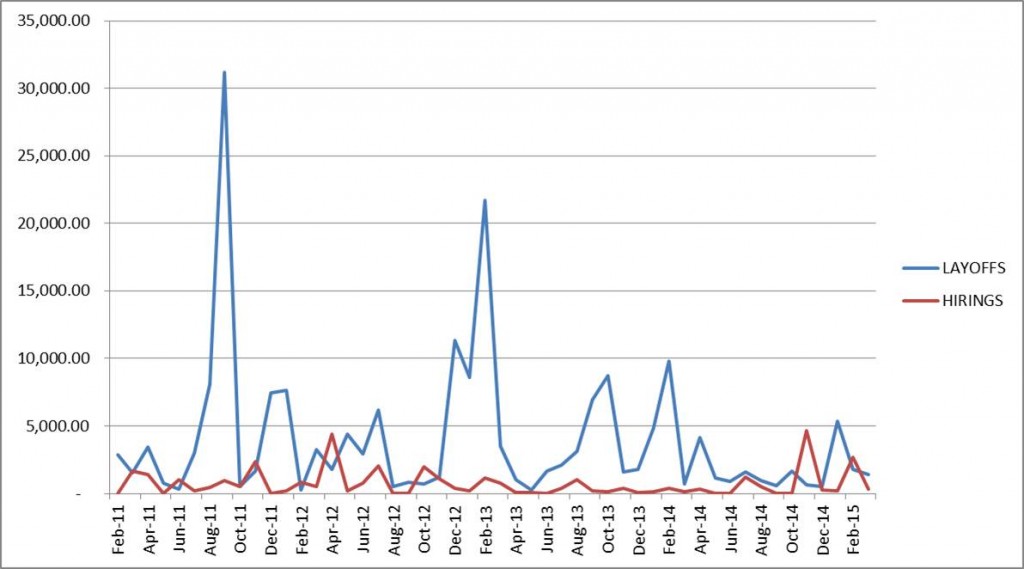 As you can see from the above chart, both layoffs and new hiring dipped in March, a trend that is consistent with what we have seen during previous February – March periods.  It is interesting to note that the number of layoffs seen in the first quarter of this year (8,556) was higher than in any quarter since the 1st Qtr of 2014.  New hiring, on the other hand dipped in the 1st Qtr 2015 from a peak of 4,900 new hires seen in the 4th Qtr of 2014.  The real question is whether these patterns are purely seasonal, or whether they reflect a modest deterioration in the employment outlook o0n Wall Street.

While plans are not complete, Royal Bank of Scotland Group announced that it could eliminate as many as 14,000 jobs at its investment bank – 1,000 of which are expected to come from the bank’s operations in Stamford, Connecticut.  The firm currently employs 2,000 people in Stamford.

Wells Fargo & Co. announced last month that it plans to close its home loan servicing operation in Milwaukee this summer, eliminating 1000 jobs.  The facility’s primary purpose was to help troubled borrowers modify their loans.  However, the decrease in mortgage delinquencies has eliminated the need for the Milwaukee operation.

We believe that the mixed jobs outlook in March doesn’t really alter our view for hiring at sell-side research departments and independent research firms.  Clearly bank profits, which rose a meager 2% in 2014 hasn’t rebounded sufficiently to produce an optimistic wave of hiring.  In addition, the uncertainty surrounding pending regulations should also keep a cap on hiring at both sell-side investment banks and boutique research firms.  The only good news we can see is that there is little reason for research firms to shed workers given a modest improvement in the underlying business environment.