Layoffs on Wall Street surged in December, marking the largest number of job cuts since May as banking executives try to reduce expenses to keep pace with tepid fixed income trading volume and increased regulations.

According to the Challenger, Gray & Christmas the December Job Cuts Report released last week, the financial services industry saw planned layoffs surge 560% to 5,177 layoffs from 784 layoffs announced in November, marking the highest level of layoffs since May of this year.  As a result of this spike, the December 2015 layoff figure remained 957% above the 490 layoff total reported during the same month last year.  Layoffs for 2015 totaled 28,409, 3.5% higher than the 27,443 level seen during 2014. 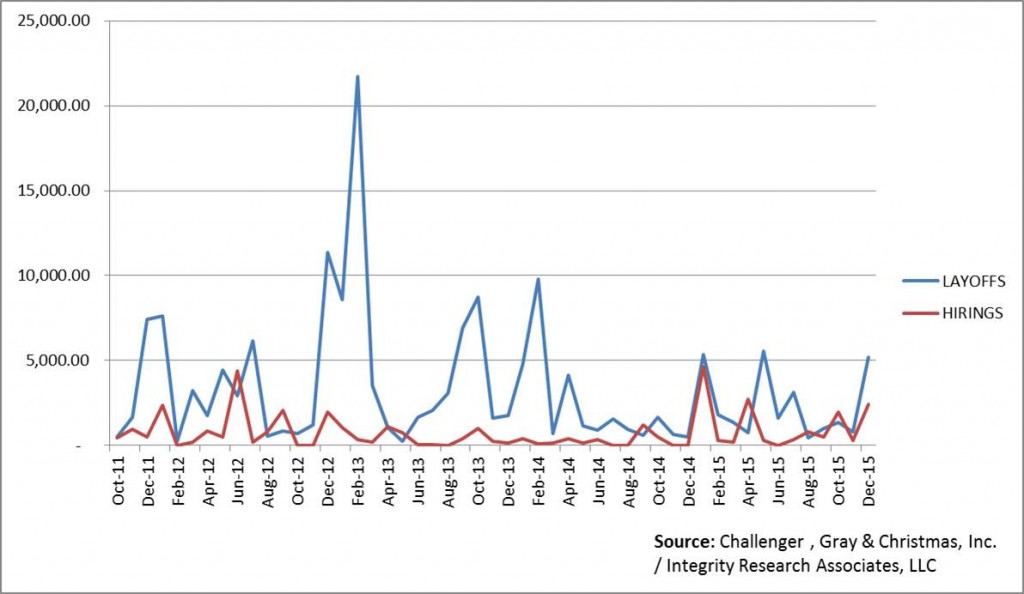 As you can see from the above chart, there are strong seasonal trends to the monthly layoff data.  One such pattern is the spike in layoffs that was seen in November / December 2015.  In fact, layoffs have surged during this period in four of the past five years.  Layoffs generally dip below the figure posted in December by the end of the 1st Qtr of the subsequent year.

Executives at Barclays Plc said they might cut an additional 20% of its investment banking staff, with most of the losses coming in Asia and from its the global cash equities business, as management tries to shore up the bank’s profitability.  These cuts, which would come on top of an existing program to eliminate 7,000 jobs at the investment bank through 2016, could be announced early next year.

Morgan Stanley announced that it will take a severance charge of about $150 million in the fourth quarter as the company pares back its fixed-income trading business to improve profitability.     This charge will cover the cost of cutting 1,200 workers worldwide, including about 470 traders and salespeople in its fixed-income and commodities business. This amounts to 25% of Morgan Stanley’s fixed-income trading staff, with other reductions coming in infrastructure and support roles.  Analysts suggest these job cuts could provide close to $500 mln in savings.

Dutch lender Rabobank Group announced that it will eliminate 9,000 more jobs over the next three years as part of a strategic overhaul that includes revamping its century-old cooperative structure.  The Netherlands’ biggest mortgage lender also plans to reduce the amount of home and business loans on its books by 150 billion euros ($165 billion), 22% of its total balance sheet, in preparation for tougher capital rules in Europe.

Citigroup Inc. said that it plans to cut at least 2,000 jobs starting in January as management continues to restructure some of its businesses.  A substantial portion of the reductions will be in middle or back-office positions across the bank’s global footprint.  Cuts are also slated to take place in the firm’s trading and investment-banking operations.  As part of this cost cutting measure, the bank will take a charge of about $300 million in the fourth quarter to cover severance costs.

Many had hoped that cost cutting at Wall Street banks was largely over as the economy continued to improve.  However, that has not transpired as the market environment continues to look challenging in 2016 as new regulations force banks to hold more equity thereby pushing them to increase their profitability.  In fact, some analysts predict that staff layoffs and reductions through attrition could total upward of 10% of worldwide employment in financial services this year – resulting in 100,000 fewer jobs by this time next year.

These difficult conditions are likely to be felt throughout the financial services sector – including at sell-side research departments and independent research firms.  Consequently, we doubt that hiring in the research industry will expand aggressively in 2016 as management maintains a conservative outlook on firm profitability.