There is a deafening silence regarding the most significant change in active equity manager investment process in a generation.  MiFID II, and the competitive reactions to it, have disrupted the institutional research landscape.  The two most notable features are a decline in asset manager research spending and large apparent gaps in research spending between managers using different research funding methods.

Our analysis comes from the FrostDB database (>500 managers/5,000 funds) which analyses manager research spending on a host of variables by strategy.

Recently compiled data suggests substantial differentials in research spending between managers using client money versus those funding research costs through their P&L.  The divergence in research spending by client-funded asset managers ranges from double to nearly eight times that of asset managers who are absorbing research costs.  Compounding the problem, the spending differentials appear to be greatest in more research-intensive segments, such as emerging markets and growth-oriented industry sectors. 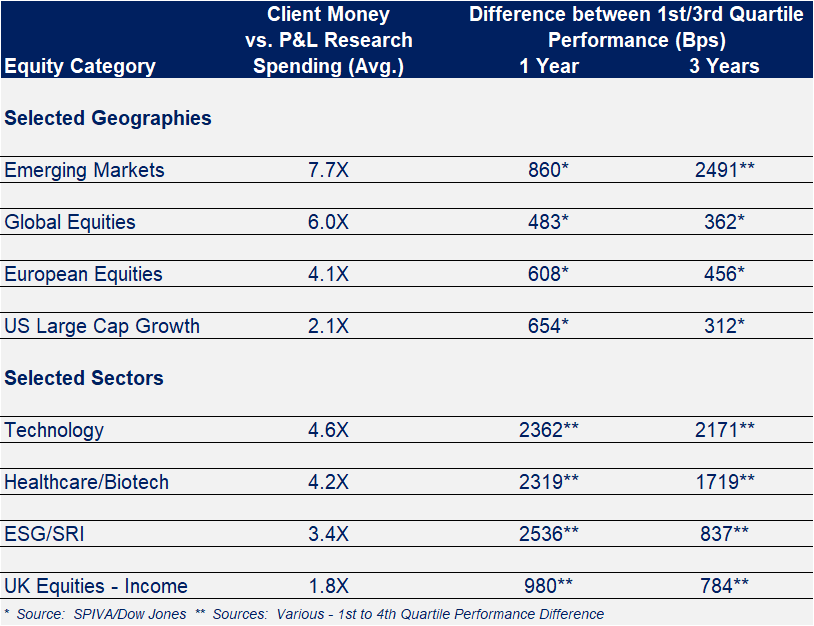 As an illustration, if manager A’s research spending is 4X manager B’s the differential looks large.  However, when you consider the quantum  this could be 4 Bps versus 1 Bp relative to average equity returns of 700 Bps per annum.  Yet, this spending differential could have a substantial impact on both research access, and potentially performance.

On average, managers using client money are spending multiples of those using P&L across multiple categories, including recent industry sector analysis in which performance gaps can be very substantial.  The performance differentials range from 312 basis points (3%) over a three-year period to over 2,000 basis points (20%).

The investment strategies with the greatest performance differentials tend to be those which are the most research-intensive, such as emerging markets, biotech and technology stocks.

Regulators, the financial press, asset managers, asset owners and politicians appear to be missing (or are unwilling to consider or comment on), one critical point.    The magnitude of research spending for asset owners is usually a handful of basis points (<10 Bps) and is significantly exceeded by average long-term equity returns (700 Bps per annum).  As our analysis shows, the few basis points in research spending is absolutely dwarfed by the thousand-point differentials between the best and worst performing funds by category.

Any debate about research spending levels and funding mechanisms in isolation with no consideration for the impact on returns or the research intensity of varying strategies is an “Emperor Has No Clothes” parable for an industry that prides itself on analytical rigour.

It is difficult to understand why asset owners (or consultants) who willingly pay (or advocate) significant premiums in terms of management fees to gain access to alternative products would balk at a small research charge that would guarantee that the investment product the client owns would have the external research access that allowed it to generate the historical returns that drove the purchase in the first place.

It is not clear how regulators balance the pre-MiFID II risk of potential asset manager research overspend (5 Bps) against the post MiFID II risk performance risk of significantly reduced research budgets (hundreds of Bps) – particularly when P&L managers have no regulatory requirement to disclose changes in research spending to clients.

Some asset owners/consultants may insist that managers either a) remove external research (which is a part of the investment process that asset owner agreed to), and or b) substantially reduce the profitability of their mandate for the manager.  It is not clear how either of these bolster asset owner returns.

Similarly, how can pension fund trustees meet their fiduciary obligations in the absence of an understanding of these issues and questioning their managers accordingly?

Frost authored on a recent paper with Stanford University which argues that asset owners and asset managers should collaborate on research budgets.  Why?  Because it is clearly in the interest of both parties (and pension beneficiaries) that the asset manager’s investment product meets its targeted returns.

The size of the research spending differentials, which are greatest in those investment strategies with the largest performance divergence between the top and bottom performing funds, lend more urgency for our call for a better dialogue between asset owners and asset managers on the subject of research spending.

Neil Scarth is a Principal of regulatory research specialist Frost Consulting which works with asset managers on research valuation/budgeting issues. He is a prominent speaker/writer on global, multi-asset class institutional research topics. Neil has held a wide range of roles in asset management and investment banking over the last 25 years, in both Europe and North America, ranging from running equities businesses at global banks to launching and managing all aspects of varying asset management products. Neil was appointed to the IMA’s Research Review Advisory Panel. Frost was sponsored by CFA UK/CFA Institute to write a White Paper on the Valuation of Equity Research to help the industry meet UK regulatory requirements. He holds an MA from the University of Southern California and BA from Carleton University.