While layoffs on Wall Street dipped modestly in June, new hiring plans remained unchanged at the lowest level seen since October of last year.  Despite the mixed performance of these series, it is clear to us that US investment banks remain nervous about market conditions given rising interest rates, weak cash equities performance, and increased regulatory pressures.

According to the June Challenger, Gray & Christmas monthly Job Cuts Report, the financial services industry saw planned layoffs dip 8% to 1,661 layoffs from 1,814 layoffs announced in May.  Despite this modest improvement, June layoffs remain 226% higher than the 510 layoff total reported during June of 2017.  During the first six months of this year, layoffs totaled 7,951 – 35% higher than the 5,911 total seen during the same period last year.

New hiring plans remained unchanged for the second consecutive month as no new jobs were available in June.  The new hiring totals seen in May and June were the lowest number of new jobs available since October of 2017.  New hiring in June was similar to the new hiring total seen in June 2017.  During the first six months of this year, new hiring totaled 7,854 new jobs — 144% higher than during the same period last year. 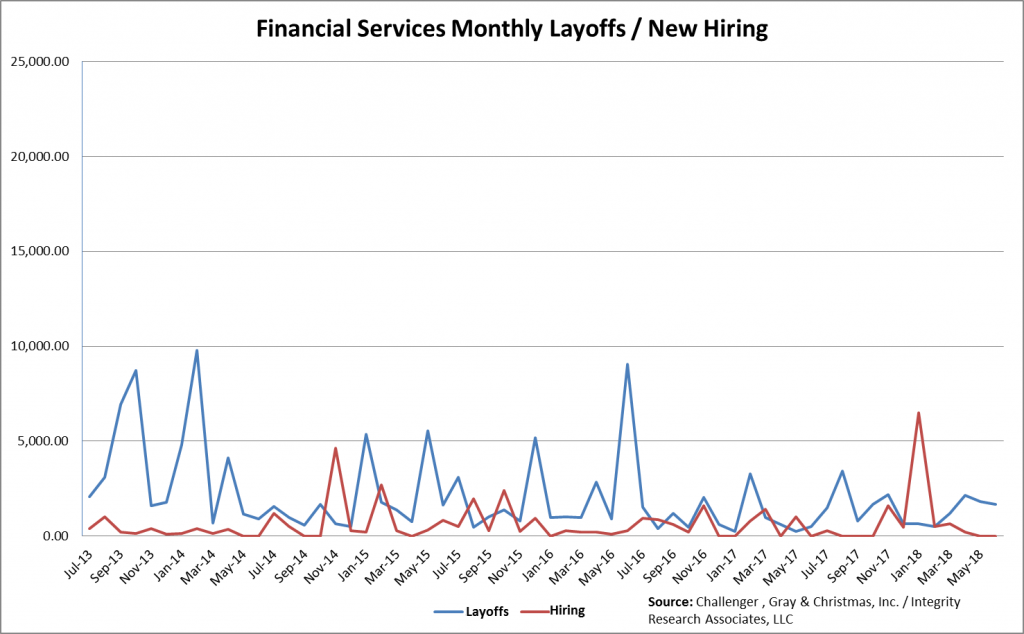 As you can see from the above chart, new hiring on Wall Street has dipped steeply lower since the turn of the year, while layoffs have trended modestly higher over the same time frame.  In fact, new hiring has remained consistently below the 12 month average for this series for five consecutive months.  Layoffs, on the other hand, have remained above the 12 month average for this series for three straight months.  These trends reflect the caution of most Wall Street executives due to rising interest rates, weak cash equities performance, and increased costs brought on by increased regulatory pressures.

Last month, UBS Group AG announced that it was laying off at least 100 positions in its asset management unit in an effort to turn around the 792 billion-franc ($807 billion) business.  The bank eliminated jobs in areas including distribution, and it is planning to focus its growth in China, as well as expanding its product line in passive and sustainable investing.

Wells Fargo Bank recently announced that it is planning to shed as many as 46 employees at its Milwaukee, Wisconsin-based asset management unit.  The bank also announced that it will lay off another 100 employees at its Fort Mills, South Carolina-based mortgage office and 63 staff at its Frederick, Maryland mortgage lending unit due to low housing inventory, increased competition and decreased mortgage applications.

We believe that research hiring will remain subdued, as most investment banks and independent research firms are likely to limit their staff additions due to the uncertainty brought on by the roll out of MiFID II.  Consequently, we expect most firms won’t alter their research hiring plans until the third or fourth quarter of the year when they get more clarity on what the buy-side is willing to pay for their unbundled research services.