Layoffs on Wall Street surged in November, while new hiring plans posted the largest increase since November of last year.  However, we don’t believe that this mixed jobs outlook reflects an underlying change in executives’ openness to start hiring after almost two years of right sizing.

According to the November Challenger, Gray & Christmas Job Cuts Report, the financial services industry experienced a 29.5% surge in planned layoffs from 1,683 layoffs announced in October to 2,179 layoffs announced in November.  This marks the fifth monthly increased in layoffs in the past six months, and the largest monthly layoff total since the 3,414 layoffs announced in August.  The November total represents a 7.3% rise from the 2,030 layoffs reported during November of 2016.  Over the first eleven months of 2017, layoffs at financial services firms totaled 15,455 — 27.8% lower than the total seen over the same period last year.

While layoffs increased, planned new hiring also rose by 1,585 jobs in November to the highest monthly total seen since November of 2016.  The strong November hiring data reflects a modest 0.9% drop in new jobs when compared to the same month last year when 1,600 new jobs were available.  Over the first eleven months of this year, new hiring has totaled 5,092 jobs – down 3.5% from the 5,276 new jobs announced during the same period in 2016. 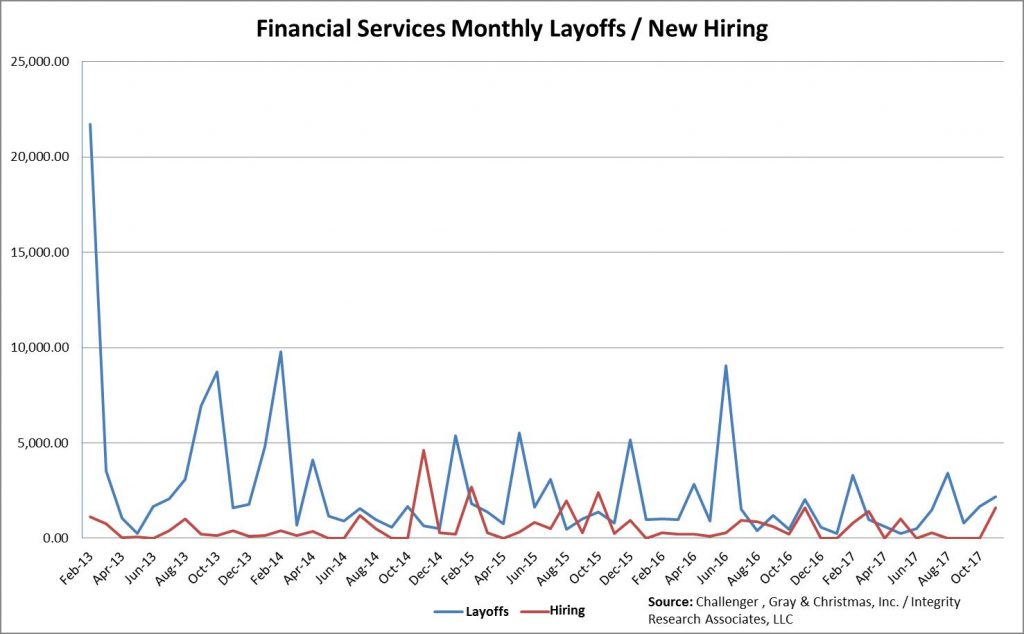 As you can see from the above chart, over the past 4 years new hiring has surged in October or November suggesting that some of this past month’s gain is seasonal in nature versus an indication that bank executives have finally decided to start rehiring.  The rise in new hiring plans this November could also reflect the fact that some banks are shorthanded as executives have added no new staff in four of the past six months.  Consequently, we are not ready to jump to the conclusion that Wall Street firms are now planning to consistently add to staff, particularly given the nervousness many have expressed given low interest rates, weak commission flows, and regulatory headwinds.

The surge in both layoffs and new hiring in November reveals a mixed jobs outlook on Wall Street.  While the significant gain in November new hiring could be viewed as a constructive sign, we are not ready to jump to that conclusion as the one month increase could well be seasonal in nature.

Instead, we believe that the fundamental employment outlook on Wall Street has not really changed much over the past year as bank executives remain nervous about the profitability of their firms.  We suspect that as long as the cash equities business remains weak, and the upcoming MiFID II research unbundling regulations creates uncertainty in the marketplace, most investment banks and independent research firms will refrain from aggressively hiring equity research analysts or sales people.