According to the October Challenger, Gray & Christmas monthly Job Cuts Report released last week, the financial services industry saw planned layoffs fall slightly more than 1% to 1,672 layoffs in October from 1,691 layoffs recorded during the prior month.  The October layoff figure represents a 20% drop from the 2,101 layoffs reported during the same month last year.  Over the first ten months of 2019, 21,089 layoffs have been recorded, 49% lower than the 41,036 layoffs seen during the same period of last year.

New hiring in October remained weak as financial services firms announced that no new jobs were available – the seventh time this has occurred in the past ten months.  The October hiring total was the same as what was recorded during the same month of last year when no new jobs were available.  Over the first ten months of 2019, new hiring totaled 2,020 new jobs – 74% lower than the 7,854 new jobs on offer during the same period last year. 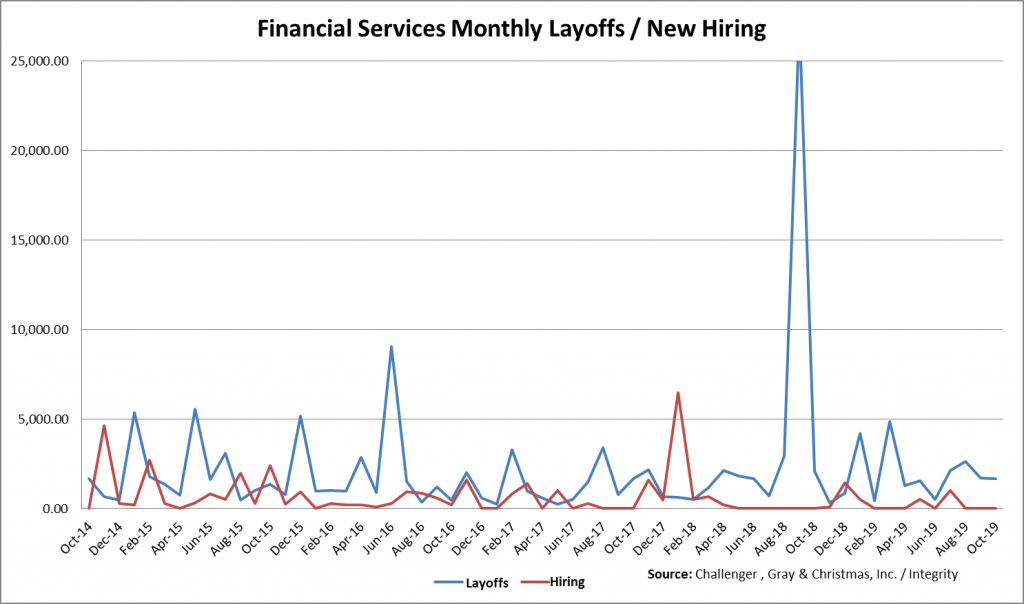 As you can see from the above chart, monthly new hiring continues to remain extremely weak.  According to the 12 month moving average for new hiring, this series has dipped 64% from 826 new jobs in October 2018 to 296 new jobs available in October 2019.  As the chart above shows, although layoffs have trended lower in recent months, they remain consistently above new hiring.  Consequently, net employment continues to shrink on Wall Street.  In fact, over the past twenty-four months net new employment has fallen twenty-two times – leading to a shrinkage of 52,663 jobs over the past two years as management continues to reduce costs by both shedding staff and delaying hiring.

During October, investment bank Lazard announced that it has axed about 200 employees after a review of its business.  The employee reductions involve approximately 200 people across the bank’s financial advisory, asset management, and corporate functions.  These layoffs come in response to a business review that led to staff reductions, the closing of smaller offices, and shuttering unprofitable investment strategies.

Last month, UK-based global investment bank, HSBC said that is planning additional cost-cutting measures that could result in 10,000 layoffs.   HSBC’s latest cost-cutting drive will reportedly focus mainly on high-paid roles, and will be implemented under a scheme known as “Project Oak”, which tried to encourage executives and managers to shrink their teams by offering corporate sponsored severance payouts.

During October global investment bank, Wells Fargo & Co. announced that it will lay off 350 people in one of their Northern California customer service centers.  This reduction is a reflection of the high costs associated with these operations.  Wells Fargo has been focused on cost-cutting as it recovers from a series of scandals that first came to light in 2016.

Columbus Ohio-based Huntington Bancshares announced in October that it will eliminate 150 to 200 jobs in a cost-cutting effort caused primarily by the impact of extremely low interest rates on reducing its revenue.

During October Utah-based Zions Bancorporation announced plans to lay off up to 500 employees, close branches across multiple states, and implement targeted pay cuts in the coming months in response to declining revenue caused by lower interest rates.  Bank executives say about 30% of the layoffs would be employees dealing directly with the public, while the remaining 60% would be in enterprise activities and behind the scenes.

As we wrote last week, Australian investment bank Macquarie announced in October that it is cutting 100 jobs in its equities and trading units located in New York and London, effectively shuttering these units.  The bank is looking to refocus its business on its Asia Pacific research and trading units.

Despite the meager dip in October layoffs, the continued lack of new hiring during the month is consistent with the general angst felt by many financial services executives as lower interest rates, weak commission revenues, and other business pressures threaten their earnings outlook.

Given this poor commercial outlook, we suspect that hiring by sell-side and independent research firms will continue to be restrained for the foreseeable future.  In fact, we doubt that many firms will look to expand the number of research analysts or salespeople on their staffs; particularly given the negative impact MiFID II has had on revenues at most research providers.