Canalyst, a Vancouver-based platform offering financial models, completed a $20 million Series B financing led by an unnamed strategic investor with participation from Toronto-based ScaleUP Ventures and existing investors including Vanedge Capital, a Vancouver-based venture capital fund.  The raise will be used for geographic expansion and product enhancements, among other priorities.

Canalyst’s financings total $28 million to date.  The firm completed a $2.7 million seed financing led by Vanedge in September 2016, followed by an investment by WorldQuant Ventures in June 2017.

Canalyst said it would use the financing to expand staff with a “particular focus on product enhancements and client service.”  Company sources indicate that geographic expansion will be a priority – the firm currently has offices in Vancouver and New York.  In addition, the firm plans additional capabilities to improve the usability of its data.

Canalyst’s offering includes financial models for 3200+ US stocks including all companies in the Russell 2000 and S&P 500, 600+ Canadian stocks, and approximately 350 ADRs.  The firm also models IPOs and spinoffs.  Last year it launched a suite of tools designed to expedite model updates during earnings season, intended to streamline the quarterly update process. 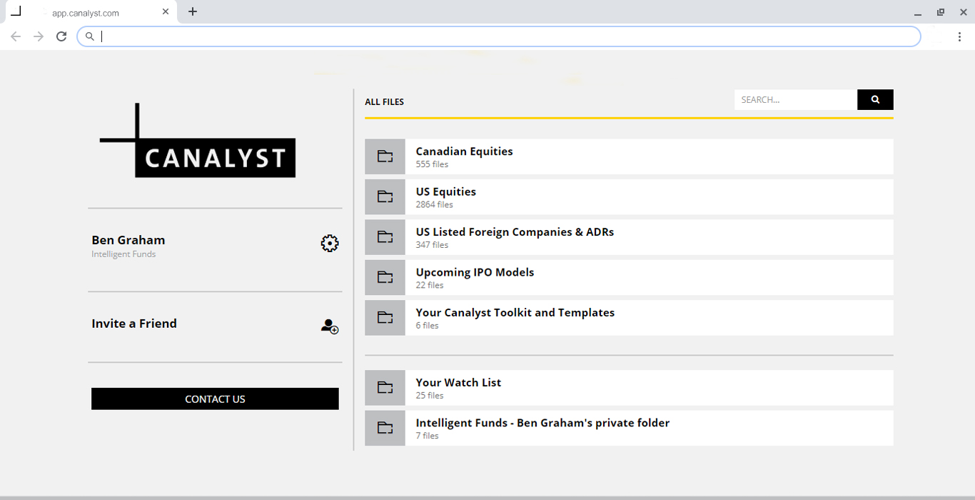 Model development is overseen by a former Fidelity Investments analyst, James Rife, who worked for Fidelity Canada for four years before leaving to be an assistant portfolio manager for a wealth management firm started by the ex-CIO of Fidelity Canada.  Canalyst has historically been hiring BAs with 1-3 years of relevant experience to build and maintain its models using established templates.  Increasingly it is recruiting for analysts with 2-5 years of experience, as well as established buy-side or sell-side analysts with sector expertise who can act as consultants.

The firm has just over 100 staff, located in Vancouver and New York.  LinkedIn registrations have grown 30% over the last year, which the greatest increase in engineering staff.  The firm lists six full-time positions on its website, including two engineering and two analyst positions.

The company said its customer base now totals over 400 clients, primarily buy-side firms including asset managers, hedge funds, and family offices.  Seven of the ten largest asset managers by AUM are customers.  Clients are fairly evenly split between long-only firms and hedge funds, according to company sources.

The firm was founded in July 2015 by Damir Hot, a former software salesperson who until 2016 also ran a company offering sales and marketing services to early and mid-stage software startups.

Canalyst has been successful positioning itself as a utility designed to streamline buy-side analyst workflow, increasing productivity and reducing costs.  It cites MiFID II-induced reductions in stock coverage as a tailwind.

We have viewed Canalyst’s main competitor to be Visible Alpha, a platform for distributing broker models which launched a couple of months before Canalyst with $30 million in seed funding from five bulge bracket firms.  However, Canalyst views Visible Alpha as mainly complementary, used by clients as a source of consensus estimates.  Another proximate provider would be Sentieo, especially as Canalyst looks to improve the usability of its data.

Now that Canalyst has a strategic investor, it may have an exit path.  If we had to guess, likely suspects would be players in the fundamental data space, such as FactSet, S&P or Refinitiv.