Consistent with the optimistic revenue expectations we picked up in our proprietary 2016/2017 Research Pricing Study, close to 40% of all investment banks and independent research firms we surveyed expect to increase their analytical staff by the end of 2017.

Last Monday, Integrity Research Associates published its third annual 2016/2017 Research Pricing Study, including the results of a proprietary survey of 161 investment banks and independent research firms from around the world.

Despite the number of analyst layoffs seen so far this year, the firms that participated in our study were surprisingly optimistic about their hiring plans.  In fact, 43% of respondents expect research staffing levels to increase in 2017, with 14% anticipating staffing gains of more than 10%.  Only 9% of those surveyed expect analyst staffing levels to decrease in 2017. 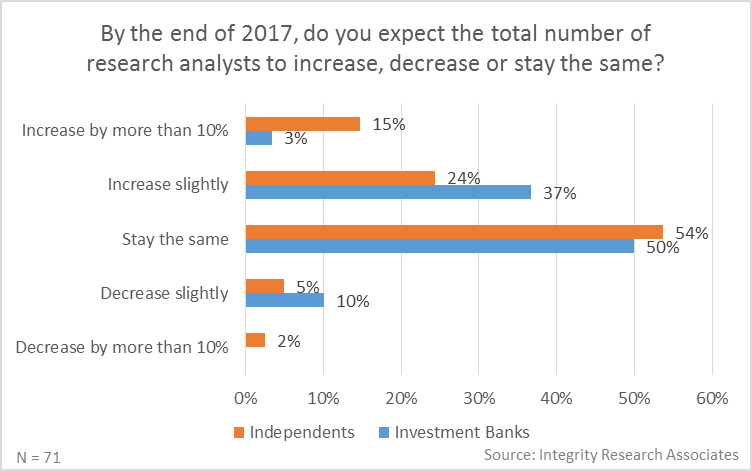 It’s clear from the survey results presented above that executives at both independent research firms and investment banks believe that improved business conditions in 2017 will warrant increased analyst hiring.

As we mentioned before, these results are somewhat surprising given the number of investment banks that have recently laid off analysts or shuttered their research departments altogether like Brean Capital, CLSA or Avondale Partners.  Not only have these firms pointed to weak cash equities revenue, but the prospect of unbundling caused by the implementation of MiFID II in 2018 have driven some firms to reassess plans for their research businesses.

However, both independent research firms and investment banks may have their own reasons to be optimistic.  The pickup in IPO business seen so far this year could be causing some investment banks to reverse some of the staff reductions seen last year.  Independent research firms may also feel that MiFID II will be a boon for their businesses, prompting them to plan to increase their analytical staffs later this year.  While we are doubtful this bullish outlook will come to pass, we will have to wait and see how the rest of the year plays out.