Redburn, one of the largest and most successful independent research firms, grew its revenues 15% for the twelve months ending March 31, 2016, according to regulatory filings.  MiFID II appears to be a net positive for Redburn, so far. 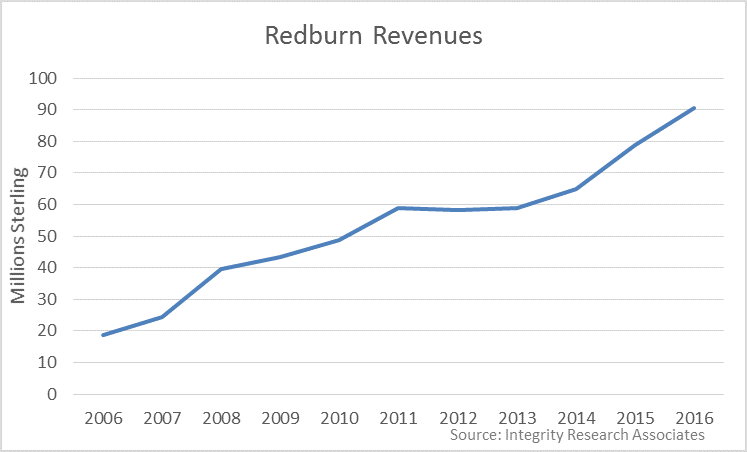 Redburn management said that the firm’s execution revenues were growing along with its research revenues, despite investment bank ambitions to woo buy side trading away from Redburn in the increasingly unbundled MiFID II environment [link requires subscription].

Redburn said that although there is a risk under MiFID II that “overall payments for research services may decline across the industry, the directors believe that the Group’s high quality research product puts it in a good position to continue to prosper whatever the eventual regulatory outcome.”

Redburn said that “consistent with developments across the industry” its margins were under pressure “from above-proportional growth in lower margin electronic trading.” It said the profitability pressures eased beginning in the fourth quarter of 2015.

The firm has also been expanding, growing from 164 employees as of March 2015 to 177 staff a year later.

Redburn restructured its compensation structure in 2014, moving away from a profit sharing plan for its partners to a more conventional salary and bonus. We believe the primary purpose of the restructuring was to reduce tax payments on the partners’ compensation.

Redburn is one of the largest independent Pan-European institutional equities brokers. It was formed in 2003 by a cadre of former Robert Fleming sales, trading and research staff, who exited after Flemings was acquired by Chase which was then immediately swallowed by JP Morgan. The firm eschews investment banking.  On the trading side, the firm is set up as an agency broker, believing that its research is more independent without the pressures of market making.

Redburn’s generally upbeat results are a sharp contrast the equity revenues of the nine largest investment banks which declined 12% over the equivalent period.  Although Redburn’s 2016 Extel ranking remained steady at number 13, it appears that the firm is gaining market share, most notably in the UK and Europe [link requires subscription].

Nevertheless, regulatory pressure to eliminate bundled trading may to be encouraging asset managers to increase their proportion of electronic trading, impacting Redburn’s margins.  Moreover, investment banks are using MiFID II as an opportunity to try to shift trading away from Redburn, which would hurt both revenues and profits.

Despite MiFID II uncertainties, Redburn is prospering so far and likely to continue to be a net beneficiary from unbundling research payments from execution costs.