A series of announcements last week provided the tipping point for European asset managers, forcing some who previously expected to charge clients for research to change policies.  Under MiFID II, it will be the norm for asset managers to pay research costs from their P&L and it is likely that other managers will follow what is now the dominant trend.

However, there is fine print to many of these decisions which has been largely overlooked by the media.  It appears that all of the US-based asset managers and at least one of the European managers announcing they will pay for research from their own pockets have limited their policies to clients subject to MiFID II.  This creates some interesting dynamics we will touch on here and explore in more detail with our companion analysis, “The Next Phase of MiFID II Will Yield Unintended Consequences” (subscription required).

Consistent with our past Research Funding Scorecards, we list below the asset managers which reportedly have decided to pay for research from their P&L under MiFID II. Highlighted firms represent those added since our last funding scorecard (subscription required).

We now show 44 asset managers which are reportedly planning to fund research from their own resources under MiFID II, clearly a dominant majority.  However, eleven of those firms (asterisked) appear to have ‘ring-fenced’ their MiFID II obligations, in most cases explicitly stated in their press announcements.  In other words, the firms will waive research costs for clients subject to MiFID II, while continuing to fund research payments alongside commissions for the balance of their clients.

For the eleven firms which have adopted one policy for MiFID II clients and different policy for non-MiFID II clients, we show estimates for the assets associated with MiFID II versus the assets which will continue to be funded alongside commissions.  For example, J.P. Morgan Asset Management, which was careful to state that its payments for research would apply to “MiFID II client accounts”, had US assets totaling $1.23 trillion of its $1.7 trillion global AUM as of August 2017.  We have attributed the full $470 billion its non-US assets to its P&L funding decision even though the number includes non-EMEA assets, pending additional details from J.P Morgan. 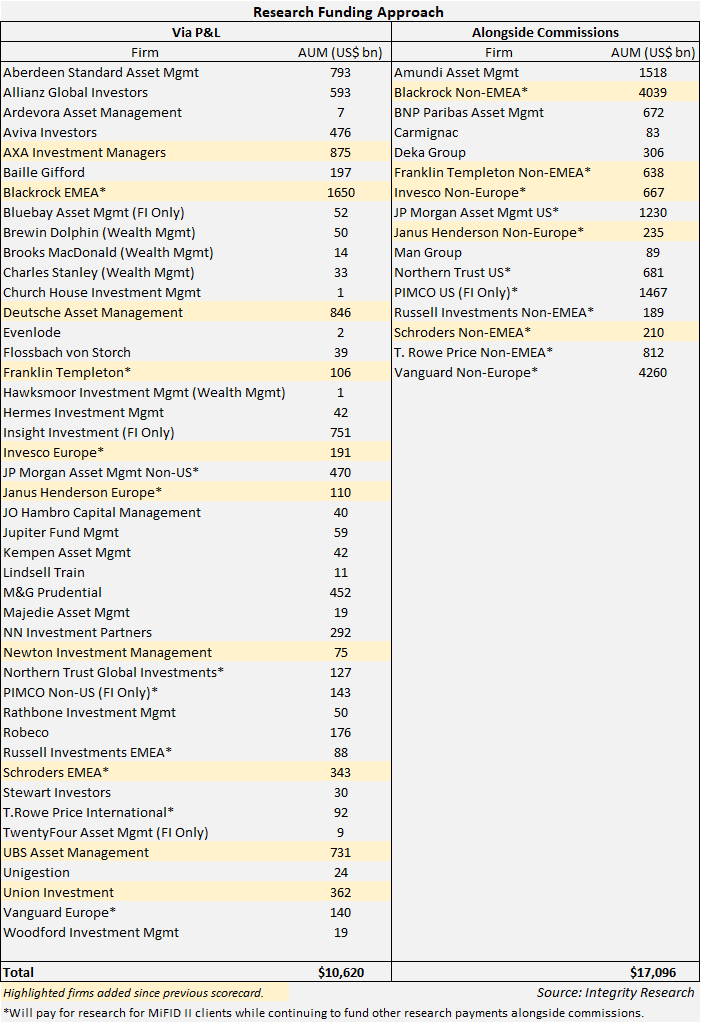 Blackrock, which as of end of June sourced 29% of its $5.7 trillion in assets under management from Europe, said that it would pay research costs for MiFID II impacted funds and client accounts.  Only 28% of Blackrock’s global assets are actively managed, which suggests that Blackrock’s actively managed EMEA assets are around $460 billion, on a par with M&G Prudential’s AUM.  A drop in the bucket for an asset manager that garners over $10 billion in fees annually.

BlackRock made a point of referencing its internal research capabilities which it said includes more than 300 professionals.  It said it was committed to developing its in-house research “while ensuring our teams retain access to external research that adds value to the investment process.”

Franklin Templeton, with European assets of $105.5 billion out of $743 billion total AUM as of the end of June, said it will pay for third-party investment research for client accounts covered by the new EU rules.  According to regulatory filings, separate accounts managed from Franklin Templeton’s UK subsidiary consisted of just under $39 billion as of the end of March.

AXA Investment Managers, the €735 billion ($875 billion) asset management arm of the French insurer, said it would also absorb research costs globally.  As of the end of last year, only 10% of AXA’s assets were in equities, making the decision easier since funding research payments alongside commissions is not an option for fixed income assets.

Deutsche Asset Management, the €711 billion ($846 billion) fund management arm of Deutsche Bank, also announced it would absorb research costs globally once MiFID II comes into force.  As of the end of June, two-thirds of Deutsche’s assets were European.  In its press release it emphasized it would “negotiate with its third-party research providers to optimise costs” but did not give a figure for its expected research costs.

UBS Asset Management reportedly also decided it would pay for research from its own resources.  As of the end of June, the unit had CHF703 billion ($731 billion) in assets under management, of which 56% were European and 36% were invested in equities.

UK-based Newton Investment Management, a £55 billion ($75 biliion) subsidiary of BNY Mellon, also announced it would pay for research from its P&L.

The avalanche of announcements prompted Schroders, Invesco and Union Investment to reverse their decisions to fund research payments alongside commissions.  BNP Asset Management was said to also be wavering and will likely announce it will pay for research from its P&L.

Schroders said it would pay for research for its clients subject to MiFID II, similar to the ring-fenced approach being taken by US-based managers, while “giving due consideration to applying this approach to other jurisdictions.”  It referenced its 120 equity research analysts and “an increasing proportion of our in-house budget in data science to capture market signals and intelligence to make us better investors.”  (Schroders was one of the first long-only asset managers to set up a separate alternative data unit.)

There is no question that the increasingly unanimous decision to fund European research payments from the P&L is momentous, with important implications for the asset management industry, research providers and vendors associated with the research space.

Historically global asset managers have strived to adopt policies globally, seeking consistent operations across the various domiciles where they operate.  Initially nearly all global asset managers were planning to fund research payments alongside commissions because that seemed the most globally consistent funding approach.  Jawboning by UK regulators and a frenzy of UK media attention helped to tip the scale toward the solution preferred by UK regulators: paying for research from the P&L.

As a result we now have two starkly different regimes which will create some unintended consequences for asset managers and research providers.  By ring-fencing MiFID II research payments, US-based asset managers now enjoy added economies of scale relative to their European counterparts.  Research costs are subsidized under US law for the bulk of their assets, whereas European asset managers suffer reduced profitability.

This is a scenario French regulators were seeking to prevent when opposing the more stringent unbundling rules championed by UK regulators.  UK regulators have prevailed and now research industry participants have to contend with the fallout.