As we noted in January, market conditions for stock pickers – and fundamental equity research providers – have improved as stocks are less likely to move in lock step than they were during the financial crisis, and stock prices are now as uncorrelated as they were before the crisis.

The CBOE S&P 500 Implied Correlation Index, which is based on the S&P 500’s top 50 companies, shows lower levels of correlations between stocks, ranging between 40% and 50%, down from nearly 90% during the peak of the crisis.  The closing value yesterday for the January 2019 futures contract was 44.58%, at levels last seen in 2007. 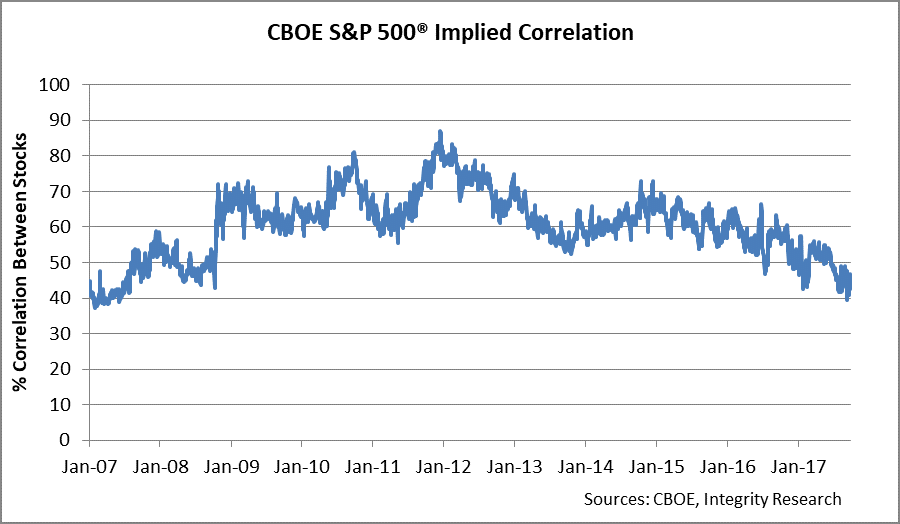 The Financial Times has labelled the trend “stockpicking nirvana” in recent articles, citing improved performance by active managers.  According to Bank of America, 54% of active managers beat their benchmarks in the first half of 2017 and if this outperformance is sustained it will be the best year for active stock fund managers since 2007.

Equity hedge funds have gained an average 7.7% this year according to HFR, already the best performance since 2014. Morgan Stanley’s prime brokers pronounced the first half of 2017 as the best for classic long-short equity hedge funds since 2010.  According to eVestment, total hedge fund assets surpassed $3.2 trillion in August, a new high.

Despite the improved environment for active managers, few are predicting that the trend toward passive investing will cease, although there is hope that outflows from active managers will reverse. Fundamental research providers will share the hope that current uncorrelated conditions continue.