According to analysis prepared exclusively for Integrity Research by Marlin & Associates[1], the international M&A advisor, average valuations in the third quarter of 2018 for large publicly traded research and information firms increased to 5x estimated 2018 revenues from 4.9x the previous quarter.  Average EBITDA valuations grew to 16x forward EBITDA from 15.6x the previous quarter, despite slower revenue growth anticipated for 2018.   The universe of firms selected are predominantly information firms which also contain research components. 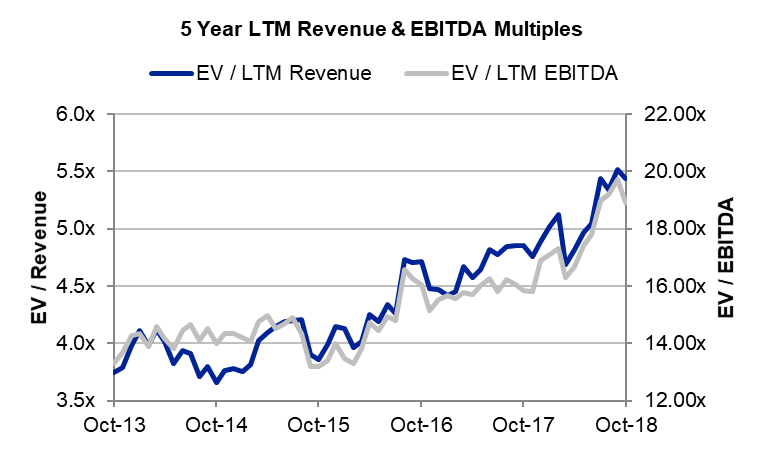 Marlin & Associates has prepared these special valuation benchmarks for the investment research industry in collaboration with Integrity Research Associates. The benchmarks monitor the valuations for publicly traded firms that offer research-related services.  The ‘trim mean’ metric used to calculate averages excludes the highest and lowest values from the calculation.

Marlin cautions that averages can be misleading and that no one multiple or combination of multiples should be used as a predictor of the future value of any company.  Growth rates – which often help drive value – may include acquisitions while EBITDA profit margins may be skewed for a variety of reasons including currency fluctuations.

Analysts expect average revenue growth in the industry to slow from an average of 12% in 2017 to 9% in 2018.  Analysts expect Gartner’s growth to fall from 35% in 2017 to 21% in 2018 and Morningstar to slow from 14% in 2017 to 4% growth in 2018.  IHS Markit, which recently launched enhanced maritime satellite tracking data, is projected to improve from a 1% decline in 2017 as it consolidated after the merger to 8% growth in 2018.  Revenue growth for many of the firms in information and market research industry is anticipated to be in the low to middle single digits – as it was in 2017.

Since the majority of investment research businesses are either privately held or vertically integrated within broker-dealers, selecting publicly traded bellwethers for investment research is a challenge. All the firms selected offer research services, but in many cases research may be a minority component of overall business.

Note that the valuation multiple of a large publicly traded firm that is a leader in its niche may not be a valid comparable for assessing the value of smaller firms or those that are not market leaders. As a result, valuations for smaller privately held research firms may differ markedly from those implied by these multiples.

Marlin & Associates is an international investment bank and corporate advisory firm based in New York City, with offices in Washington, DC, and Toronto. The firm advises owners and managers of U.S. and international companies that provide software, data, and related services and has a particular expertise in advising owners and managers of firms that provide business intelligence, marketing intelligence, fintech and healthcare IT. For more information please visit www.MarlinLLC.com.

[1] Marlin & Associates Securities LLC, a wholly owned subsidiary of Marlin & Associates Holding LLC, is a broker-dealer registered with the Securities and Exchange Commission and is a FINRA/SIPC member firm (www.finra.org). For more see www.MarlinLLC.com. Nothing contained herein should be construed as a recommendation to purchase or sell any security. The information herein is not fully comprehensive, nor does it consider specific objectives, circumstances or needs of individual recipients.

[2] Valuations reported last quarter included MSCI, which has been removed from the analysis because research products represent a small fraction of the firm’s financials.