While equity commission volumes surged for many Wall Street firms in the first quarter, IPO volume plunged during that same period, falling to the lowest level seen since the first quarter of 2012 when IPO volume rebounded from depressed levels seen during the financial crisis. 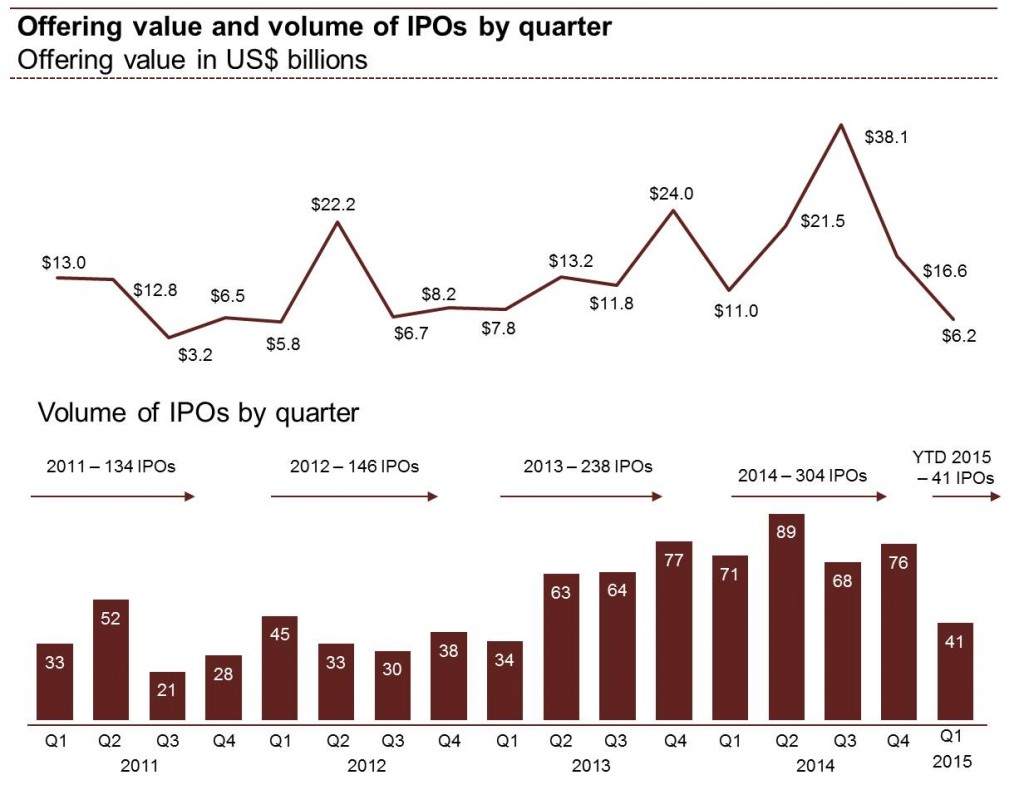 While the 41 IPO’s priced in the first quarter of this year fell off sharply from 2014’s strong first quarter, this total is generally consistent with first quarter IPO volume seen since 2010 where the number of IPOs fell between 33 to 45.

Renaissance Capital reports that so far in April 2015, IPOs have raised $1.7 bln in proceeds, the lowest April on record since the $1.6 bln raised during the same month in 2010.

The bulk of the IPOs seen in the 1st quarter were in two sectors – Healthcare and Financial Services.  According to PwC, 17 healthcare IPOs generating $1.2 bln in proceeds closed during the 1st Qtr.  During the same period 15 financial services IPOs raised 1.8 bln in new capital.  Also during the 1st Qtr, 5 technology IPOs generated $1.3 bln in proceeds while 2 energy IPOs brought in $1.2 bln in capital.

One of the few signs of strength seen in the 1st Qtr IPO data was the slew of follow-on offerings that came to market.   According to PwC, there were 253 U.S. follow-on offerings in the first quarter raising a total of $68.8 billion.  This represents a 103% surge in the number of offerings and a 92% increase in the amount raised from the previous quarter.

According to Renaissance Capital, only 49 companies submitted initial filings in the 1st Qtr 2015, down 50% from 98 companies which filed in the 1st Qtr 2014.  The total IPO pipeline now contains 122 IPOs looking to raise $22 billion.  While this is the same number of deals as one year ago, it is 33% lower in terms of proceeds. Of these, 53 have filed initial or updated S-1s in the past 60 days, indicating plans to move forward with an IPO in the 2nd Qtr.  Of this “active pipeline”, 40% is in the health care sector.

Although 1st Qtr 2015 IPO volume was weaker than many analysts expected, a healthy pipeline, constructive seasonal trends, and a robust stock market suggests that IPO activity is likely to pick up in the second quarter.

A rise in investment banking revenue, if it is accompanied by continued gains in trading revenue, could bode well for sell-side research budgets.  Clearly, a pickup in IPO volume should encourage investment banks to continue hiring analysts to handle the increased coverage workload.  In addition, a larger number of IPOs should increase the number of stocks that portfolio managers and traders are interested in receiving research and insight on.  This could increase investor demand for both sell-side and independent research over the short run.