Layoffs on Wall Street surged in October after falling the previous month, while banks continued to put new hiring plans on hold, the third straight month this has happened.  This deterioration reflects the ongoing nervousness of bank executives as weak commission volumes, low interest rates, and increased regulatory pressures have depressed earnings.

According to the October Challenger, Gray & Christmas Job Cuts Report, the financial services industry experienced a 112% surge in planned layoffs from 794 layoffs announced in September to 1,683 layoffs announced in October.  This marks the fourth monthly increased in layoffs in the past five months.  The October total represents a 260% rise from the 468 layoffs reported during October of 2016.  Over the first ten months of 2017, layoffs at financial services firms totaled 13,276 — 32% lower than the total seen over the same period last year.

Planned new hiring remained weak in October as no new jobs were on offer for the third consecutive month.  The anemic October hiring data also reflects a drop in new jobs when compared to the same month last year when 200 new jobs were available.  Over the first ten months of this year, new hiring has totaled 3,507 jobs – down 4.6% from the 3,676 new jobs announced during the same period in 2016. 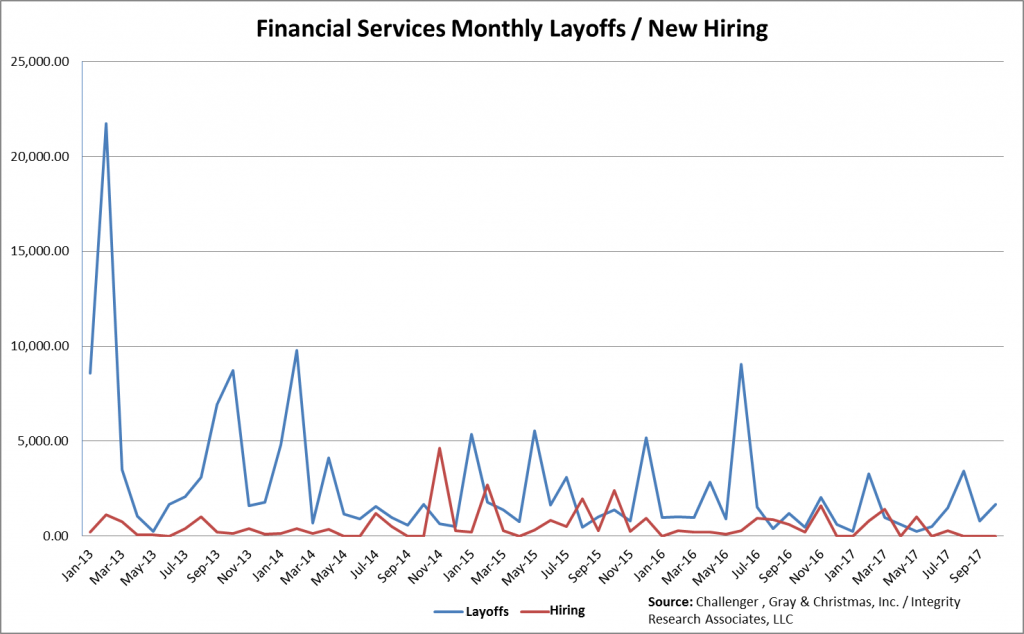 As you can see from the above chart, monthly layoffs have outpaced new hiring fairly regularly over the past few years.  For example, thus far during 2017, layoffs have been higher than hiring eight times in ten months.  This compares to 2016 when layoffs outstripped hiring in eleven out of twelve months. This trend highlights the consistent reduction in net employment on Wall Street that has taken place as management has successfully trimmed their payrolls.

We suspect that the nervousness brought on by weakness in the cash equities business and the near-term implementation of MiFID II research unbundling regulations are likely to limit most banks and independent research firms from aggressively hiring equity research analysts or sales people any time soon.