The improvement seen in the overall employment picture over the past few months was evident in the financial services industry in February, according to a private jobs survey.  Layoffs at Wall Street banks and brokerage firms plunged while new hiring surged during the second month of 2015.  However, the right sizing seen for much of last year doesn’t seem to be over for a few large investment banks.

According to the Challenger, Gray & Christmas monthly Job Cuts Report released last week, the financial services industry saw a 67% drop in planned layoffs from 5,375 layoffs announced in January to 1,800 layoffs announced in February.  In addition, this total represents an 82% plunge from the 9,791 layoffs reported during February of 2014.  Over the first two months of 2015, layoffs at financial services firms are 50% lower than the total seen over the same period last year.

The improvement seen in layoffs was also seen in new hiring.  During February, financial services firms announced a healthy 2,700 new jobs to be filled, a twelve-fold increase from January’s modest 200 new jobs reported and a six-fold increase from 400 new hires announced in February of 2014.  Over the first two months of this year, new hiring has totaled 2,900 jobs – up significantly from the 529 new jobs announced during the same period in 2014. 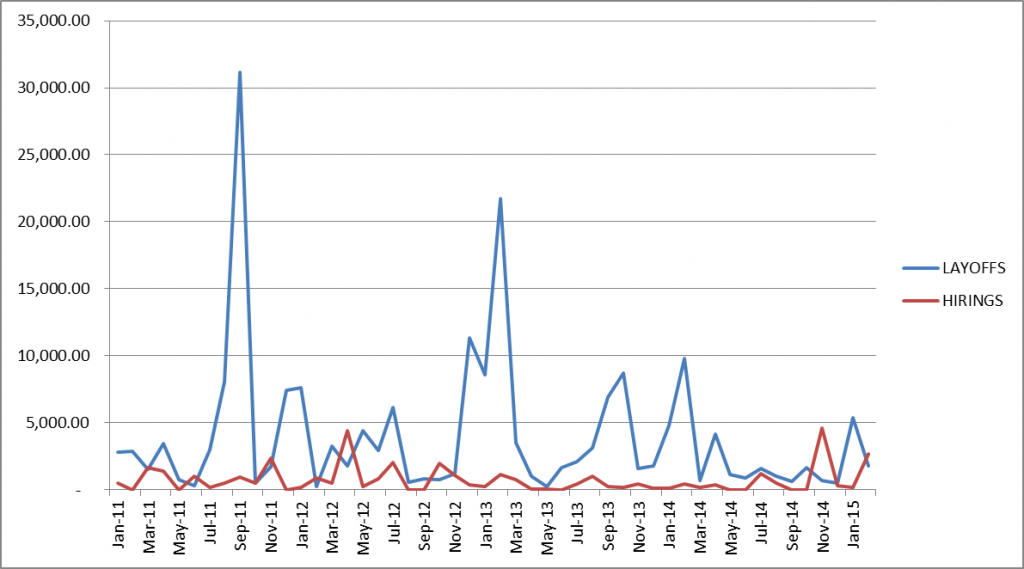 As you can see from the above chart, announced layoffs dipped below announced new jobs during February – a development that has only taken place twice in the past year.  In addition, the chart above does show that the spikes in layoffs have gotten less pronounced in the past few years – an obvious sign that the job picture on Wall Street is improving.  Despite these trends, we should not conclude that the Wall Street jobs outlook is healthy.  Layoff announcements are an extremely volatile series, and we would not be surprised to see layoffs head significantly higher in the coming months.

Last month, Royal Bank of Scotland Group announced that it plans to eliminate more than 1,000 jobs at its U.S. trading division as part of a global restructuring of its investment bank.  Most of these jobs are expected to come from the bank’s operations in Stamford, Connecticut. The job losses are part of a wider plan for the investment bank to focus on 13 countries instead of 38.  The Financial Times reports that RBS could cut as many as 14,000 of its 18,000 jobs within the firm’s investment bank.

Bank of America announced that it is laying off 250 staff in Charlotte, 200 employees in Norfolk, and 69 workers in Jacksonville – primarily from its mortgage and technology groups. The layoffs are driven by the bank’s reduction in its portfolio of bad loans.

JPMorgan Chase also announced that it plans to lay off 163 employees from its customer service office in Jacksonville, Florida by March 30.  The bulk of these cuts are slated to come from its mortgage servicing staff as the bank responds to a reduced level of mortgage originations and lower bad loans.

While no specific number of layoffs was announced, Credit Suisse management did say last month that it plans to make hundreds of millions of Swiss francs in additional cost cuts and sharply reduce bonuses for top executives, as the Swiss bank braces for challenges presented by the strengthened franc and continues to deal with the effects of a large legal settlement.  Management explained that the cost reductions will likely involve both job cuts and moving employees out of Switzerland to lower-cost locations.

So, does this pickup in Wall Street employment over the last few months mean that hiring in the research industry will improve this year?  We seriously doubt it.  In our minds there are three factors that will drive research hiring.  This includes equity commission volume, IPO volume, and regulatory developments.

As we have mentioned in the past, equity commission volume looks to be stronger during the first two months of the year than we have seen in the recent past, providing an encouraging sign to many investment banks.  However, IPO volume is down sharply so far this year after the torrid pace of new issues seen in 2014.  Lastly, one of the biggest unresolved issues for most research management is what ESMA decides to do with its MIFID II proposal regarding the use of client commissions to pay for sell-side and independent research.  We believe that whatever ESMA decides on this score, sell-side investment banks will suffer a significant reduction in revenue for their research.

Consequently, we see one positive factor (trading commissions) outweighed by two negative factors (IPO volume and regulatory developments) impacting research hiring.  In our minds, this means that the employment outlook for research analysts, sales people, and other research support staff at sell-side and independent research firms should remain subdued during 2015 – at least until one of the two negative factors discussed above turns bullish.