Layoffs on Wall Street plunged during June after surging in the prior, while new hiring also rose to the highest monthly level seen since February of this year.  Based on the data seen over the first half of the year, it looks like the overall Wall Street job outlook may be finally turning a corner.

According to the Challenger, Gray & Christmas monthly Job Cuts Report released earlier this month, the financial services industry saw planned layoffs drop approximately 70% from 5,539 layoffs announced in May to 1,624 layoffs announced in June.  The June 2015 layoff figure represents an 81% increase from the 897 layoffs reported June 2014.  Over the first six months of 2015, layoffs at financial services firms are 23% lower than the total seen over the same period last year.

New hiring in June was also encouraging as financial services firms announced 1,624 new jobs were now available, following a modest figure of 325 new jobs in May.  Over the first six months of this year, new hiring on Wall Street has totaled 4,345 jobs – up over 322% from the 1,029 new jobs announced during the same period in 2014. 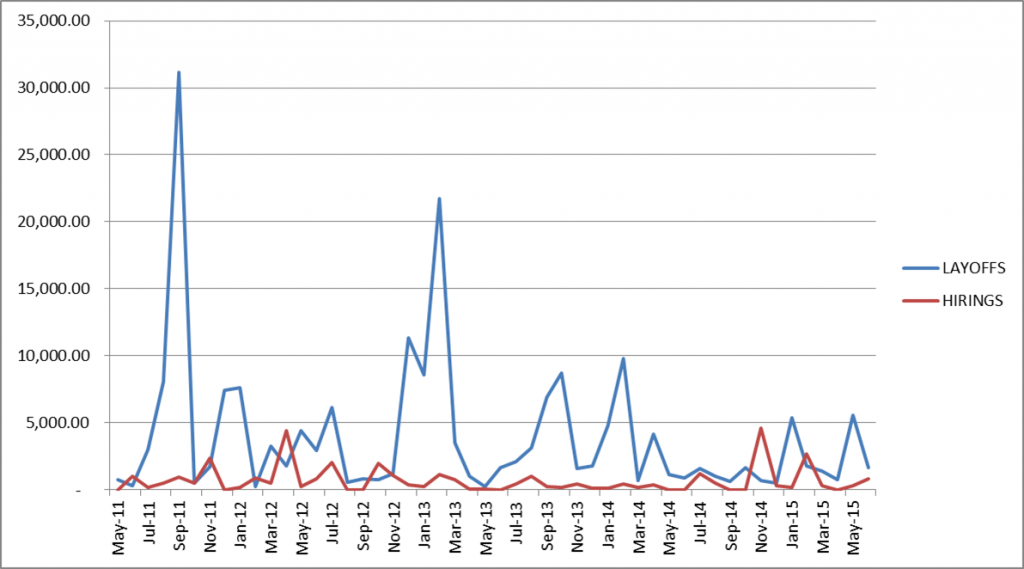 The only major layoff announcement that took place in June was from HSBC which said it would cut costs by as much as $5 billion in the next two years prompting the bank to shed as many as 25,000 employees during that period.

Europe’s largest bank by assets revealed plans to reduce the number of branches it operates by approximately 12%, while selling its businesses in Turkey and Brazil.  The closures in Brazil and Turkey will result in an additional 25,000 job cuts on top of the other job losses announced last month. Since HSBC started its global cost cutting initiative in 2011, the bank has shed 40,000 people from its workforce.

Company management has said that it is considering relocating its headquarters from the UK to Hong Kong, a decision that is likely to take at least two years to implement.  The primary reason for the proposed move is the introduction of a bank levy by UK politicians in 2010 which cost HSBC £700 million ($1.07 billion) last year.

Although the financial services industry jobs picture in June looks decidedly better, this doesn’t alter our overall outlook for hiring in the research industry.  Weak mortgage and IPO business across the industry has offset stronger trading revenue.  In addition, European regulatory uncertainty regarding the continued use of commissions to pay for research has made most research executives nervous.

Consequently, we think most investment banks and independent research firms will continue to take a cautious approach toward hiring over the coming months.  The big question is whether research firms will look to fill open positions with more experienced research analysts in an effort to provide greater insights and more value to the buy-side as firms prepare for the likelihood of unbundling.