According to the August Challenger, Gray & Christmas monthly Job Cuts Report released last week, the financial services industry saw planned layoffs rise over 23% to 2,638 layoffs in August following a 320% surge in the prior month to 2,143 layoffs.  The August layoff figure represents a 9.8% dip from the 2,925 layoffs reported during the same month last year.  Over the first eight months of 2019, 17,726 layoffs have been recorded, 53% higher than the 11,592 layoffs seen during the same period of last year. 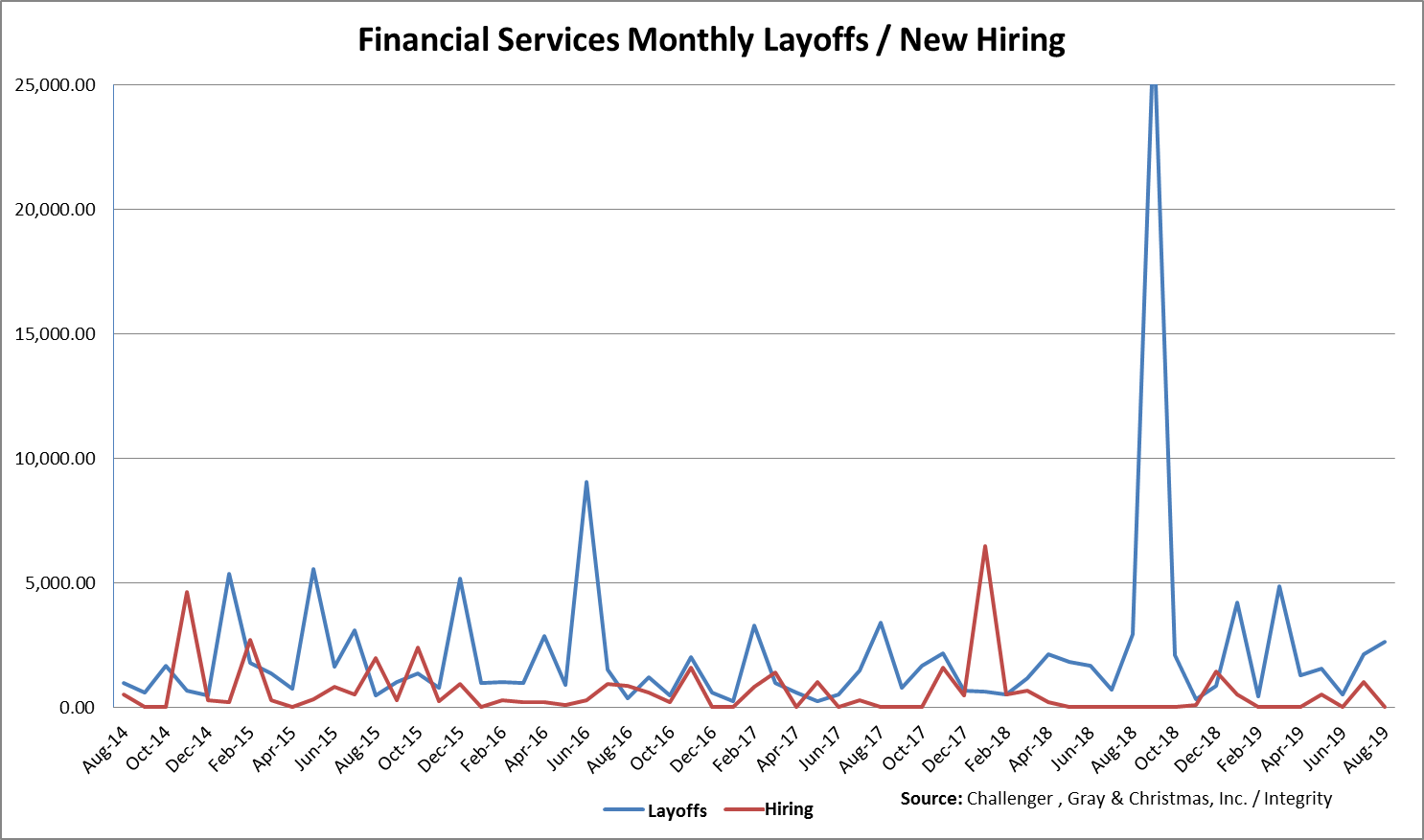 As you can see from the above chart, monthly layoffs continue to trend higher while new hiring appears to be moving lower.  This view is supported by the data.  According to the 12 month moving average for layoffs, average monthly layoffs have hit 4,028 layoffs – 186% higher than the total seen in August 2018 when monthly average layoffs were 1,409.  During this same period, the 12 month moving average for new hiring has dipped 64% from 826 new jobs in August 2018 to 296 new jobs available in August 2019.

Last month, HSBC announced that it will axe 4,000 jobs that will be focused from the ranks of the bank’s senior executives.  Senior management explains that this involves less than 2% of the firm’s workforce and 4% of the bank’s salary costs.  This layoff was announced in the wake of former CEO John Flint stepping down.  Flint had already started trimming jobs across the bank and was planning to cut hundreds of investment banking positions.

Wells Fargo also announced that they plan to eliminate 400 positions from a customer service center in Minnesota.  Management explained that the work previously performed by the laid off staffers will be absorbed by other domestic contact center locations.  The reduction is expected to take place from November through January.

The weakness in August layoffs and new hiring is consistent with the overall bearish jobs outlook on Wall Street, as many financial services executives continue to try and “right size” their operations in an effort to keep a tight control on costs given difficult business conditions.

This trend suggests that overall hiring by sell-side and independent research firms should continue to be weak for the foreseeable future.  While we would not be surprised if firms fill existing job openings, we doubt that many will look to expand the number of research analysts or salespeople on their staffs — particularly given the impact MiFID II has had on shrinking research revenues at most research providers.