According to a private jobs survey, Wall Street layoffs in April dipped for the third consecutive month suggesting the overall employment picture is continuing to improve.  However, investment banks are clearly not excited about the near-term business outlook as they refuse to bring on new staff – choosing instead to wait until business improves.

According to the Challenger, Gray & Christmas monthly Job Cuts Report released earlier this month, the financial services industry saw a 45% plunge in planned layoffs from 1,381 layoffs announced in March to 758 layoffs announced in April.  Consistent with this improvement, the April layoff figure represents an 82% decline from the 4,124 layoffs reported April 2014.  Over the first four months of 2015, layoffs at financial services firms are 52% lower than the total seen over the same period last year.

Unfortunately, the improvement seen in layoffs during April was not evident in new hiring.  During April, financial services firms announced that no new jobs were available following a measly 300 new jobs offered in March.  This two month lull in new hiring was the weakest seen since September / October period last year.  Over the first four months of this year, new hiring on Wall Street has totaled 3,200 jobs – up over 200% from the 1,029 new jobs announced during the same period in 2014. 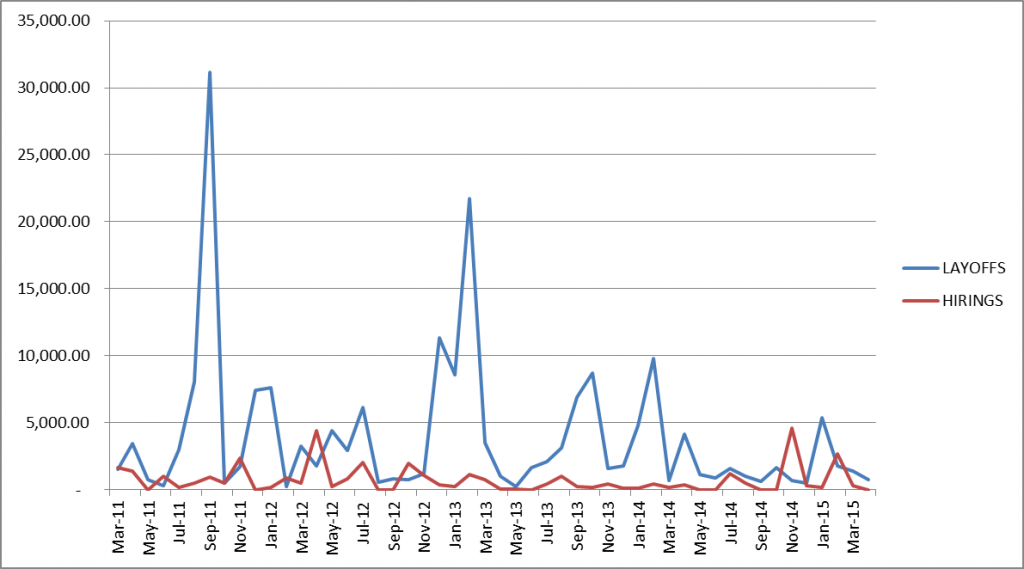 As you can see from the above chart, although layoffs can be volatile on a monthly basis, it looks like they have been gradually trending lower over the past few years.  New hiring, on the other hand, looks to be stuck at anemically low levels reflecting the fact that Wall Street management teams have been loath to staff up with business conditions remaining so weak.

While nothing has been formalized, it has been rumored that layoffs would be announced sometime in the next few weeks at Wells Fargo Securities in Chicago, Charlotte, and New York.  This follows recent layoffs at Wells Fargo’s home loan servicing operation.

Some analysts suggest that Wells Fargo is likely to continue shedding workers throughout the remainder of 2015.  This is due, in part, to the fact that Wells Fargo has a larger workforce than the other large banks.  Wells Fargo has about 227,000 full-time employees, vs. 201,000 at JPMorgan, 164,000 at Bank of America and about 179,000 at Citigroup.

As a result, Wells Fargo is the only one of these four large banks with a non-interest expense (NIE) for salary benefits being greater than 50%, at about 56% of total NIE.  At JPMorgan, Bank of America and Citigroup that percentage is 38%, 38% and 33%, respectively.

Last month Charlie Gasparino of the Fox Business Network reported that his sources suggest that over the next year a number of Wall Street banks would continue to cut back trading personnel due to the increased automation of most trading operations.  The two banks that are expected to implement the deepest cuts in their trading divisions include Goldman Sachs and JPMorgan.

The mixed jobs outlook in April doesn’t change our underlying view for research industry hiring.  While many US investment banks experienced a pickup in cash equities revenue in the first quarter, this was offset by weak IPO volume and uncertainty regarding pending regulations regarding research payments.  Consequently, we think these factors will convince management to continue taking a cautious approach toward hiring at both sell-side investment banks and boutique research firms.