Layoffs on Wall Street plunged in January following a surge the prior month as financial services executives remain cautious due to weak trading revenue, poor IPO volumes, and increased regulations.

According to the January Challenger, Gray & Christmas Job Cuts Report released last week, the financial services industry saw planned layoffs plunge 80.7% to 998 layoffs from the unusually high 5,177 layoffs  announced in December.  As a result of this drop, the January 2016 layoff figure remained 81.4% below the 5,375 layoff total reported during the same month last year. 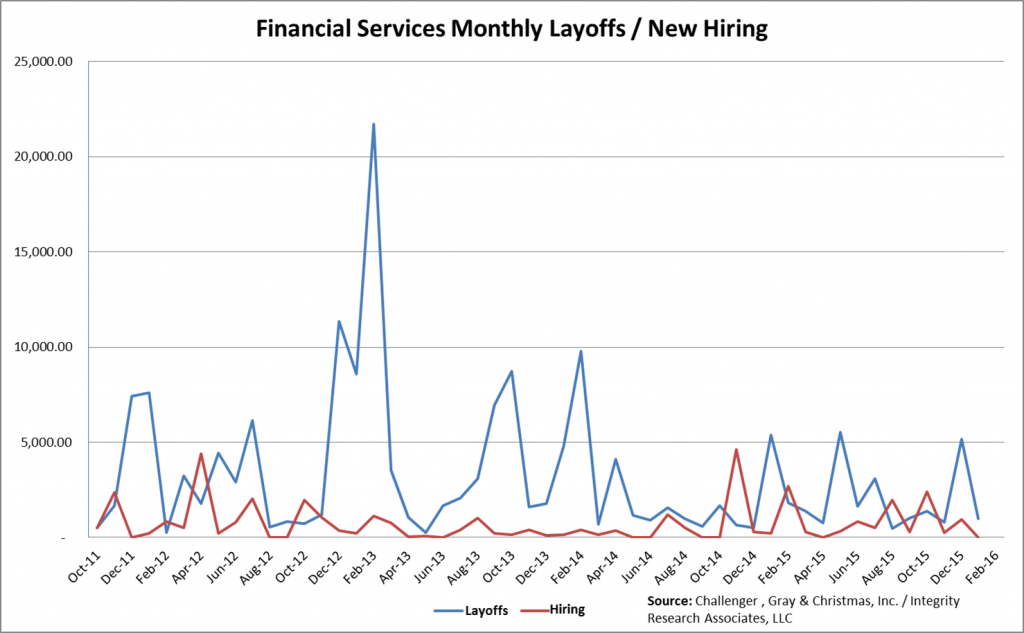 During January, Goldman Sachs said that it was planning to cut up to 10% of its fixed-income traders and salespeople later this quarter, a move that could impact up to 250 employees.  This reduction is larger than the regular 5% first quarter pruning which normally takes place at the global investment bank.

Wells Fargo also announced that it is planning to eliminate 121 technology jobs across the bank’s operations nationwide as part of an efficiency initiative.  These layoffs are the latest effort by the Charlotte-based bank to reduce costs at a time when low interest rates have had a negative impact on revenue growth.

Birmingham, Alabama-based Regions Bank announced last month that it plans to lay off 260 employees company-wide “as part of an effort to improve efficiency and restructure the company’s expense base…”  The job cuts are expected to take place during the first quarter of 2016 and would be in a number of different departments and offices.  The layoffs represent just over one percent of the company’s workforce, King said.

During January Morgan Stanley management said that it would accelerate the shift of more of its operations to lower cost cities like Mumbai and Budapest as it aims to slash costs.   The investment bank announced an initiative to cut up to $1 billion by 2017 by using technology and outsourcing jobs now in its New York headquarters and other higher cost cities.  Morgan Stanley Chief Executive James Gorman explained the move, “We have too many employees based in high-cost centers doing work that can sensibly be done in lower cost centers.”

Although Wall Street layoffs dipped sharply in January, this is clearly not a signal that banks and brokerage firms have stopped rationalizing costs and are looking to staff up as they have in the past.  As we have mentioned previously, weak equity and fixed-income commission revenue, a slowdown in IPO volume, and increased regulatory pressures continue to squeeze profits.

Consequently, we expect that managers at sell-side research departments and independent research firms will be wary of aggressively expanding the ranks of their analysts and salespeople.  Of course, we think most firms will replace staff that have moved on, and some might even try to expand coverage of strategic sectors like biotechnology.  However, we doubt that research industry executives will suddenly get bullish about adding to their expense base unless it becomes clear that revenue is on an extended upswing.  Unfortunately, we don’t believe this will take place any time in 2016.