Analysts at Wells Fargo Securities garnered the highest number of awards assigned by Thomson Reuters for buy/sell recommendations and earnings estimates for US stocks during the 2016 calendar year. Stifel and Goldman Sachs tied for second place. 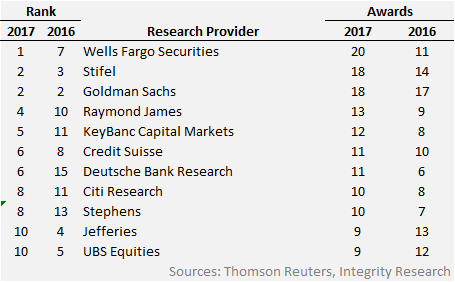 Unlike the Institutional Investor and Extel awards which are based on buy-side surveys, Thomson Reuters assigns its analyst awards based on calculations from its performance measurement unit, StarMine.  The 2017 stock picking awards for the United States are based on the 2016 calendar-year performance of recommendations. The 2017 awards for estimating accuracy are based on quarterly periods that reported between 01 April 2016 and 31 March 2017.

Independent research firms are largely excluded from the awards.  Buckingham Research, Exane BNP Paribas and Sidoti refused to participate in the rankings.

Retail-oriented firms such as Wells Fargo, Stifel and Raymond James are well-represented in the awards because buy/sell performance is far more important in the retail channel than among institutional investors.  Institutional investors largely ignore recommendations unless they are sell recommendations, which are so rarely given by bank analysts.