During a recent Euromoney strategy presentation, Ned Davis Research CEO Matthias Paul revealed the investment strategy firm’s plans for creating new investment products, along with other growth initiatives.  ETFs tied to its research are a high priority for the firm, as well as providing investment overlays for RIAs to use in managing client assets.

However revenues have shrunk from $39 million in 2011 to $34 million in the fiscal year ending September 2015. Matthias, who joined NDR a year ago, says that the firm has already started to turn around, growing $1.3 million in four months since the start of the new fiscal year in October 2015.

The recent revenue increase is from price increases, not organic revenue growth. Like sister company BCA Research, NDR has restructured its pricing. Previously NDR had one bundled price for all its services. The firm has unbundled its pricing, and introduced premium pricing on some of its services.

So far 150 of its 900 clients have seen price increases totaling $1.3 million. NDR’s target is to generate $6 million in incremental revenues from price increases over the next four years.

As we reported in December, NDR launched a new data platform called Data Solutions which provides more granular access to its models and data. The capability allows NDR to market its quantitative data to adjacent markets, such as quant fund managers and hedge funds.

A key part of the firm’s strategy is linking its research to investment product. One approach is to market its models to RIAs as a way of providing Tactical Asset Allocation overlays or smart beta enhancements to client portfolios.

Last November, NDR formed a partnership with Global View Capital Management, a Wisconsin-based asset manager, to launch a series of Tactical Strategies based on NDR’s institutional research and models.

Paul announced a new partnership with Carson Wealth Management Group, one of LPL Financial’s highest-grossing firms with about $4.3 billion under management. He also said that Fund Evaluation Group helped NDR get on the Envestnet platform, a leading wealth management portal. 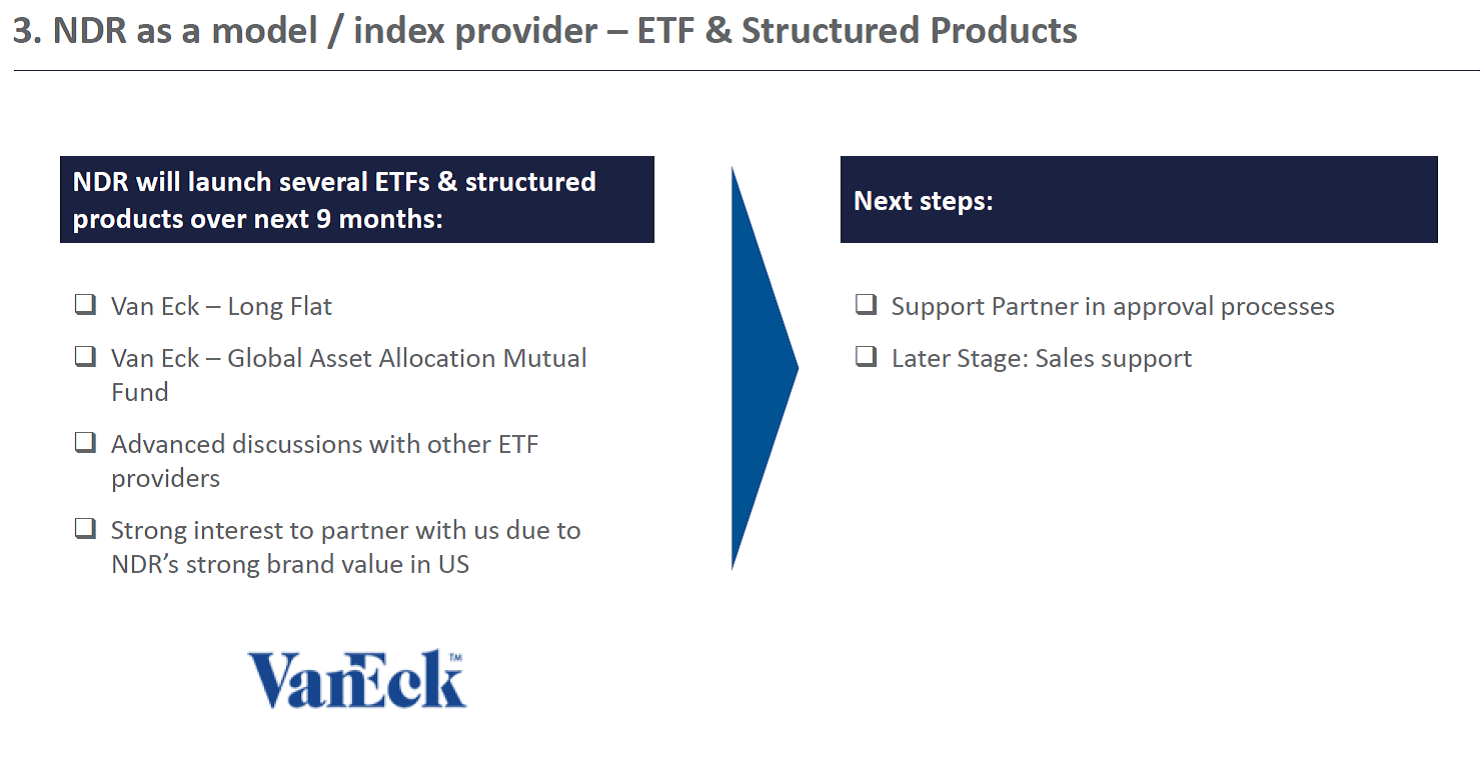 Paul also announced that NDR is working with VanEck, one of the largest sponsors of ETFs, to launch several ETFs and structured products over the next nine months and that it is in advanced discussions with other ETF providers.

With his strong quantitative background, Matthias Paul is a good fit for NDR and appears to be making quick progress in turning the firm around.  The firm is making its core data and models more accessible to broaden its market and generate incremental sales.

The main thrust of its efforts seems to be in connecting its research product to assets, giving RIAs and financial advisors overlays they can use in managing client assets. Given the firm’s strong footprint in the RIA space, this seems a powerful and potentially high margin way to expand its services.

The firm is also aggressively pursuing ETFs and other investable product driven by its research. This has a longer lead time, but as firms such as Dorsey Wright have shown, can yield substantial revenues and profits.