Investment banks reduced the number of conferences they sponsored by 4% in 2019 yet gained share as the overall number of conferences dropped 11%, according to data supplied by investor relations platform provider Virtua.  Two of the top three sponsors — Citi and JP Morgan — cut their conference programs by over 10% while most of their direct competitors increased event sponsorship.  Overall, banks sponsored nearly 40% of all conferences.

The number of conferences in 2019 tracked by Virtua’s StockConferenceCalendar service decreased by nearly 430 events to 3,588 conferences.  MiFID II-induced cutbacks in conference spending were one factor in the decline.

After increasing their conference sponsorship in 2018, Citi and JP Morgan cut back their programs 26% and 14% respectively.  Credit Suisse, which is trying to rebuild its equities franchise after four years of decimation, increased its events in 2019 by 21% to tie Citi as 2019’s top conference sponsor. 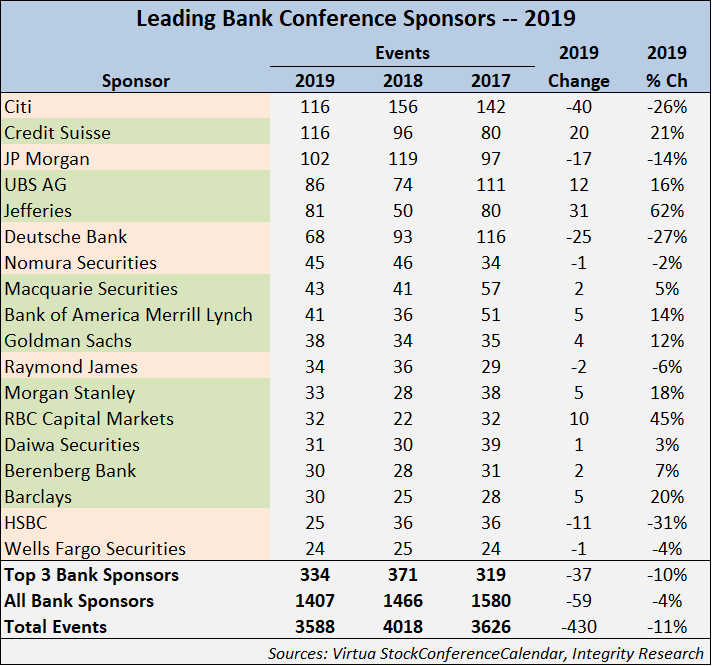 Jefferies added the most conferences during 2019, raising its total by 31 events, a 62% increase.  UBS also expanded, becoming the fourth largest sponsor by adding 12 conferences.  RBC upped its program by 10.

With the exception of Deutsche Bank, which began shutting down its equities business in July, the other bulge bracket banks – Bank of America/Merrill, Goldman Sachs, Morgan Stanley and Barclays – all increased their conference sponsorship in 2019.

The top financial centers – New York, London and Hong Kong – remained the most popular conference venues.  Their market shares are off slightly from 2017, but it is not clear that they are losing their long-term appeal.  The diversity of conference locations fell in 2019 but remains higher than 2017 as the number of venues dropped to 350 in 2019 from 380 in 2018 while up from 333 in 2017. 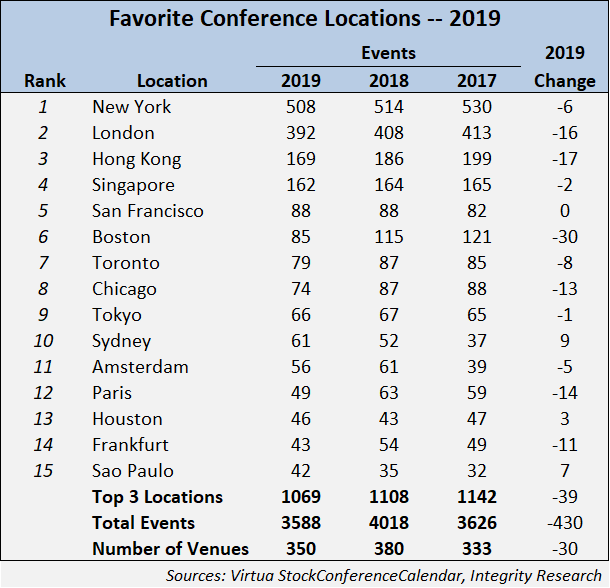 Not captured in Virtua’s statistics are more customized bank events such as reverse road shows, site visits, small venue meetings, and more specialized forms of corporate access which are more highly valued by investors than standard conferences.  Thus, part of the fall in conference sponsorship might be explained by banks devoting more resources to non-standard events rather than conferences.

Broader pressures on cash equities units from declining commissions and reduced spending by the buy-side on advisory services are also likely causes of bank conference cutbacks.  Nevertheless, it is notable that the largest banks tended to increase conference sponsorship in 2019, suggesting that conferences remain an important part of their overall advisory services.