US IPO activity started off the 3rd Qtr in a mixed fashion as 21 new deals were priced in July following a similar number of deals priced during the prior month.  Despite the healthy number of new deals, only $4.8 bln in cash was raised during the month – a rather paltry sum compared to the $12.6 bln raised during June. 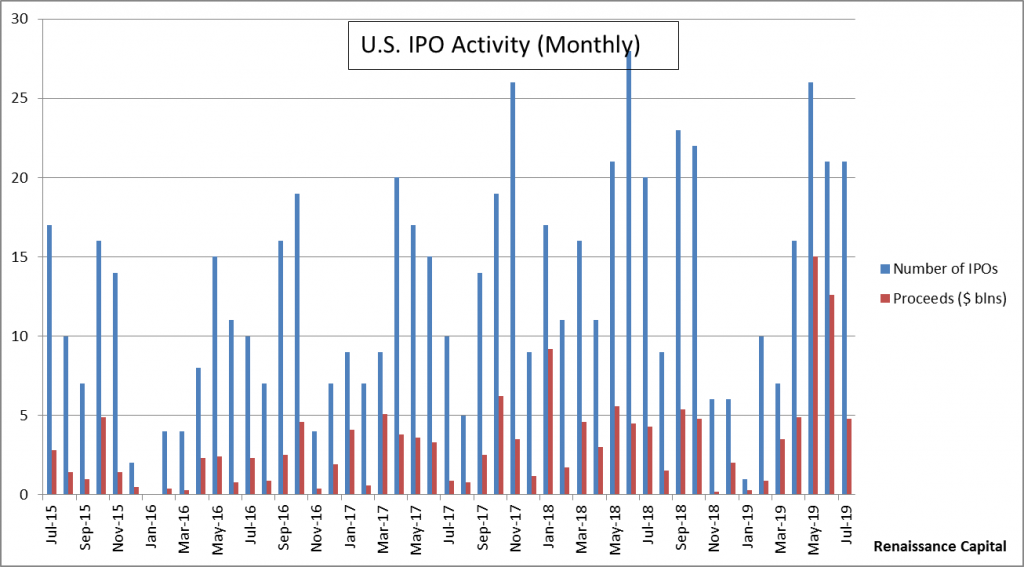 The mixed performance in US IPO activity during July is not terribly surprising given the fact that a number of huge deals came to market in May and June, including Uber ($8.1 bln raised), Slack ($7.37 bln raised), Avantor ($2.90 bln raised) and Chewy ($1.02 bln raised).

One piece of bad news seen in recent IPO data is the weakness in new filings evident during June and July. This has pushed the performance of this series over the first seven months of the year below the total seen during the same period last year.  This data could be a precursor to a downturn in IPO activity in the coming months.

The big question is how will US IPO activity impact bank earnings and activity in the research business?  We suspect that the mixed performance in IPOs so far this year, combined with weakness in trading commissions, and the fall in sell-side research revenue prompted by MiFID II, should dampen investment bank earnings in the next few quarters thereby limiting any meaningful increase in research analyst hiring at most US investment banks.