While Wall Street layoffs in January dipped to the lowest level seen since the spring of 2013, new hiring flat lined for the second consecutive month, indicating that Wall Street executives remain nervous about business conditions and the jobs outlook given weak commission volume, low interest rates, and growing regulatory pressure.

According to the Challenger, Gray & Christmas Job Cuts Report, the financial services industry saw planned layoffs slip close to 57% in January to 260 layoffs – the lowest level of layoffs reported since May 2013.  The January 2017 layoff figure remained 74% lower than the 998 layoff total reported during the same month last year.

However, the jobs outlook was much less rosy for job seekers in January as no new jobs were available during the month, the same bleak picture that was evident in December, 2016.  New hiring in January was also identical to the figure seen during January 2016, reflecting a recent seasonal pattern where new hiring on Wall Street has slowed at the start of the new year. 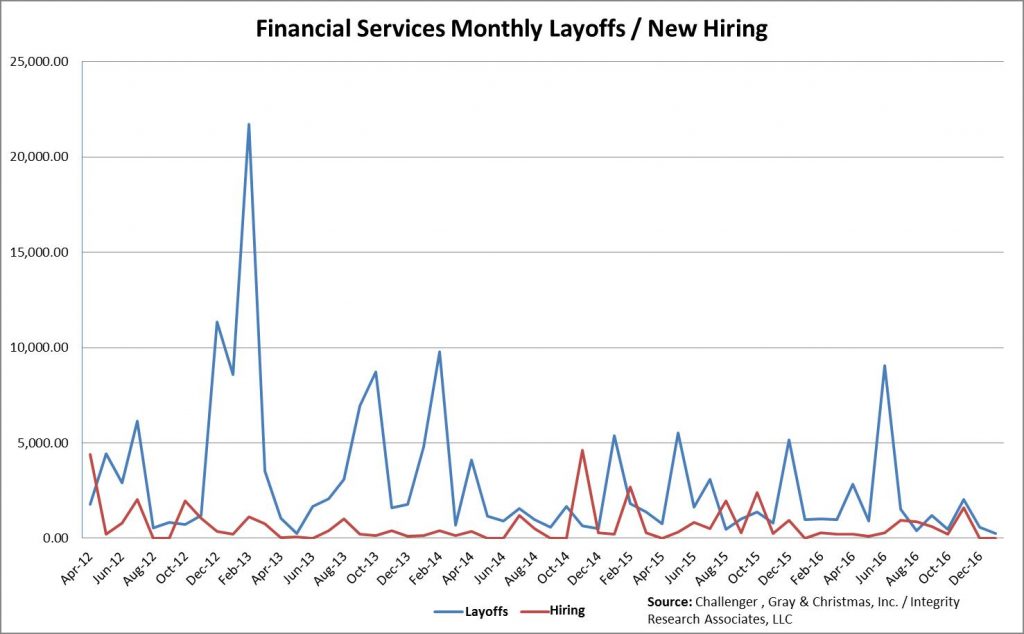 As you can see from the above chart, Wall Street layoffs have markedly dropped over the past few years.  In fact, the monthly average has slipped from 21,676 layoffs in 2008 to 1,835 layoffs in 2016 reflecting the fact that most Wall Street firms have finally “right sized” their firms following the 2008 credit crisis.  New hiring, on the other hand, has also fallen in the past few years, though much less sharply.  In 2012, average monthly new hiring totaled 1,031 new jobs.  This total fell to approximately 440 new jobs per month in 2016.  This trend is consistent with our view that Wall Street executives are loathe to expand their staffs much as overall profits remain under pressure.

Last month, Deutsche Bank told some employees that the firm will continue to cut jobs even after the firm slashed bonuses for senior staff.  Some managers in the investment bank, managers have been asked to identify the bottom 20 percent of performers in preparation for possible cuts.  These new cuts are on top of the bank’s current plan to eliminate about 9,000 jobs globally from 2015 through 2018.

In a memo last month, the bank said it eliminated bonuses for its top executives for a second straight year and slashed variable compensation for other senior employees. The announcement came a day after Deutsche Bank finalized a $7.2 billion settlement in the U.S. over its role in selling mortgage securities that contributed to the financial crisis.

During January, HSBC Holdings said it is cutting around 100 of its senior investment bankers, adding to cuts last year from a restructuring in HSBC’s global banking business.  HSBC said these cuts have resulted from annual performance reviews designed to make “appropriate changes to strengthen and grow the business.”

Royal Bank of Scotland also announced a plan to continue downsizing its Stamford, CT offices, as the company confirmed plans to lay off 21 employees in IT and operations in March.  This layoff represents the latest round of a May 2015 downsizing plan. Last year, RBS management explained these layoffs in a statement, saying “In line with the strategy to make RBS stronger, simpler and more sustainable, we are reducing the size of the bank to focus on our core customers, products and locations.  This includes our trading and sales hub in Stamford.”  In the past year, RBS has eliminated about 270 Stamford positions.

The good news for the January jobs outlook was the fact that layoffs slowed to the lowest level seen since May 2013.  Unfortunately, this dip in layoffs was offset to a large degree by continued weakness in new hiring as Wall Street management remains concerned about the various factors which continue to squeeze bank profits, like weak IPO volume, falling commissions, and low interest rates.

These factors lead us to believe that most sell-side and independent research firms probably won’t be increasing their research teams or sales staff anytime in the near future.  In fact, we would not be surprised to see further retrenchment in research department staffing during 2017 as Wall Street executives try to find ways to turn their research franchises into profit centers in the wake of the unbundling mandated by MiFID II.