While layoffs on Wall Street dipped sharply in October following a surge the prior month, new hiring plans remained weak as no new jobs were available for the sixth consecutive month – the longest streak where no new hiring has taken place over the past eight years.  The weakness in this data reflects continued caution from many Wall Street executives given rising interest rates, weak cash equities performance, and increased regulatory pressures.

According to the October 2018 Challenger, Gray & Christmas monthly Job Cuts Report, the financial services industry saw planned layoffs plunge 92% to 2,101 layoffs from a record level of 27,343 layoffs announced in September.   Additionally, October layoffs rose almost 25% from 1,638 layoffs reported in October 2017.   During the first ten months of this year, layoffs totaled 41,036 – 209% higher than the 13,276 layoff total seen during the same period last year.

New hiring plans on Wall Street remained unchanged for the sixth consecutive month as no new jobs were available in October.  In fact, this is the first time in at least eight years where no new hiring took place in the financial services industry for six consecutive months.  New hiring in October was unchanged from the anemic new job total seen in October 2017.  During the first ten months of this year, new hiring totaled 7,854 new jobs — 124% higher than the 3,507 new jobs that were available during the same period last year. 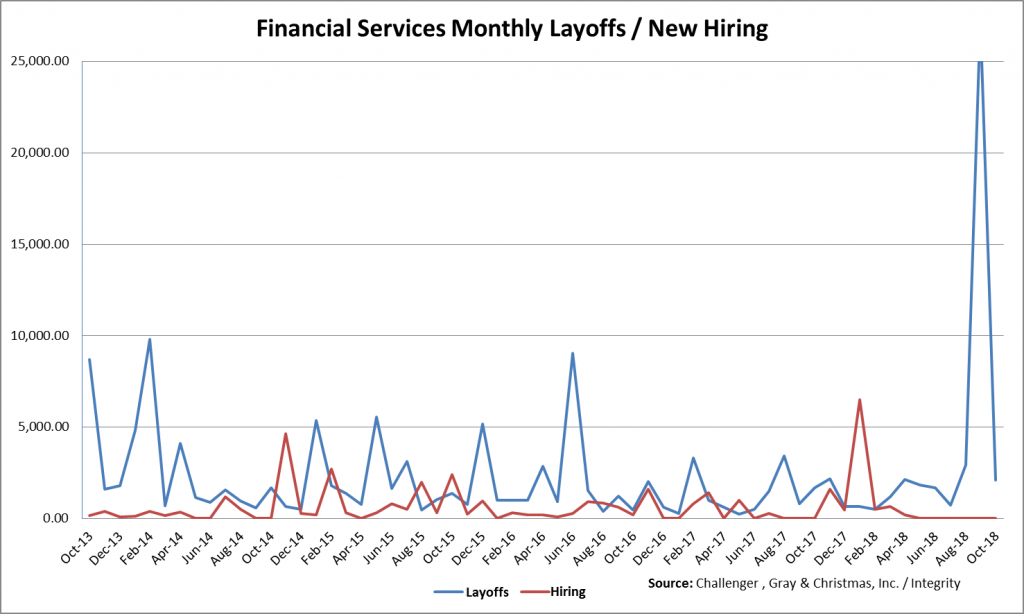 As you can see from the above chart, over the past year layoffs continue to trend much higher than new job availability.  Since September 2017, the 12 month average for layoffs has gradually moved higher from 1,357 layoffs seen in September 2017 to a peak of 3,972 layoffs in September 2018.   At the same time, new hiring has trended lower.  The 12 month average for new hiring has fallen from 1,102 in March 2018 to an average of 826 new jobs available in September and October 2018.  This pattern reflects a weak jobs outlook as investment bank executives remain loathe to add staff, instead preferring to reduce headcount in order to keep a lid on costs given limited mortgage refinancing, the shift to online banking options, and weak trading volumes.

During October, JPMorgan Chase announced that it is planning to lay off 107 workers from its San Antonio Banker Support Team which handles inquiries from branch bankers.  The functions of the San Antonio team are being absorbed into Banker Support teams in other cities.  JPMorgan, with more than 250,000 employees worldwide, employs approximately 5,000 in San Antonio.  Some suggest that JPMorgan’s move is a reflection of the fact that an increasing number of customers are doing their banking online.

In October Minneapolis-based U.S. Bank also announced that it is laying off 700 employees, due to changing business needs.  Bank representatives declined to say where and what divisions the layoffs would be in, nor would they give a more detailed explanation for the layoffs.

Despite the plunge in layoffs seen in October, the lack of new hiring reported in this past month’s Challenger Gray & Christmas job cut report reveals continued management nervousness about the near-term earnings picture.

We believe this data is consistent with our longstanding view that sell-side and independent research firms are unlikely to try to aggressively add to staff through the remainder of the year, at least until they get a better idea about how much the buy-side will be willing to pay for their research in an unbundled environment.