According to the December Challenger, Gray & Christmas monthly Job Cuts Report released last week, the financial services industry saw planned layoffs plunge 70% to 664 layoffs from 2,179 layoffs announced in November.  The December layoff figure represents an 11% gain from the 598 layoffs reported during December of last year.  The December layoff total marks the lowest monthly level of staff reductions seen since June of this year.  During 2017, layoffs totaled 16,119, 27% below the 2016 annual figure of 22,015, and the lowest annual layoff figure in more than twenty years. 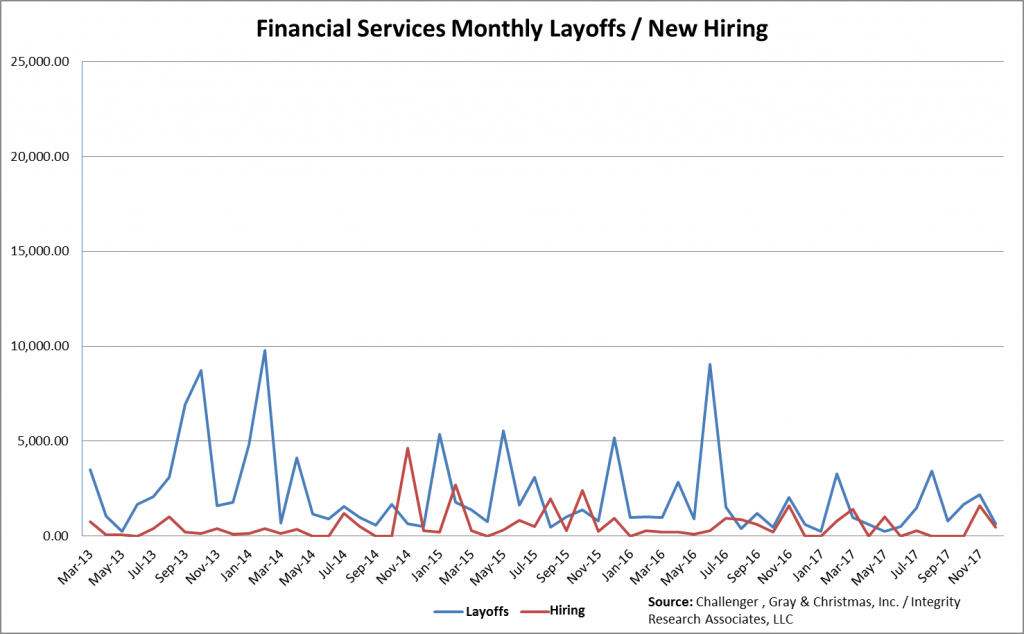 As you can see from the above chart, monthly layoffs and new hiring data are extremely volatile data series.  However, in recent years layoffs have decreased, whereas new hiring has grown modestly.  In fact, over the past five years annual net employment (new hiring less layoffs) on Wall Street has dropped by a smaller amount every year.  During 2013, net Wall Street employment slipped by close to 57,000 jobs; in 2015 net employment dropped by more than 17,600 jobs; and during this past year net employment fell by close to 10,500 jobs.  This steady trend suggests that investment banks may have finally “right sized” their workforces following the financial crisis.

During December Charlotte based Wells Fargo & Co. announced that it was laying off 60 employees in its mortgage division across the US as it reorganizes the firm following a series of regulatory investigations.  Approximately 40 of these staff were involved in reviewing the quality of the bank’s mortgages, while 20 were market lending managers across the country.  These moves have taken place after regulatory investigations into improper customer charges in the bank’s mortgage division.

The December layoff and new hiring data, while mixed, point to a more constructive trend as Wall Street firms may be close to completing the right sizing of their organizations.  However, we don’t think this means that financial services firms are preparing to turn on the hiring spigot any time soon.

As far as the research business goes, we suspect most investment banks and independent research firms will continue to fill open positions.  However, we doubt that many banks will aggressively try to grow their headcount of analysts or salespeople – at least until they get more clarity about how MiFID II is likely to impact their businesses.