Layoffs on Wall Street plunged in April, while new hiring plans remained anemic for the third consecutive month.  Despite this one month performance, year-to-date layoffs remain significantly higher than last year, whereas hiring remains considerably lower than was recorded for the first four months of 2018 reflecting a fragile jobs outlook as many investment banks and asset management firms continue to slash headcount.

According to the April Challenger, Gray & Christmas monthly Job Cuts Report released last week, the financial services industry saw planned layoffs plunge over 73% to 1,295 layoffs from 4,884 layoffs announced in March.  The April layoff figure also represents a 40% drop from the 2,148 layoffs reported during April of last year.  Over the first four months of 2019, 10,865 layoffs have been recorded, 143% higher than the 4,476 layoffs seen during the same period last year.

New hiring in April remained weak as financial services firms announced no new jobs were available, marking the third consecutive month where bank executives did no new hiring.  The April new jobs total was also lower than the 199 new jobs that were reported for April 2018.  Over the first four months of 2019, new hiring totaled a paltry 520 new jobs – 93% lower than the 7,854 new jobs on offer during the same period last year. 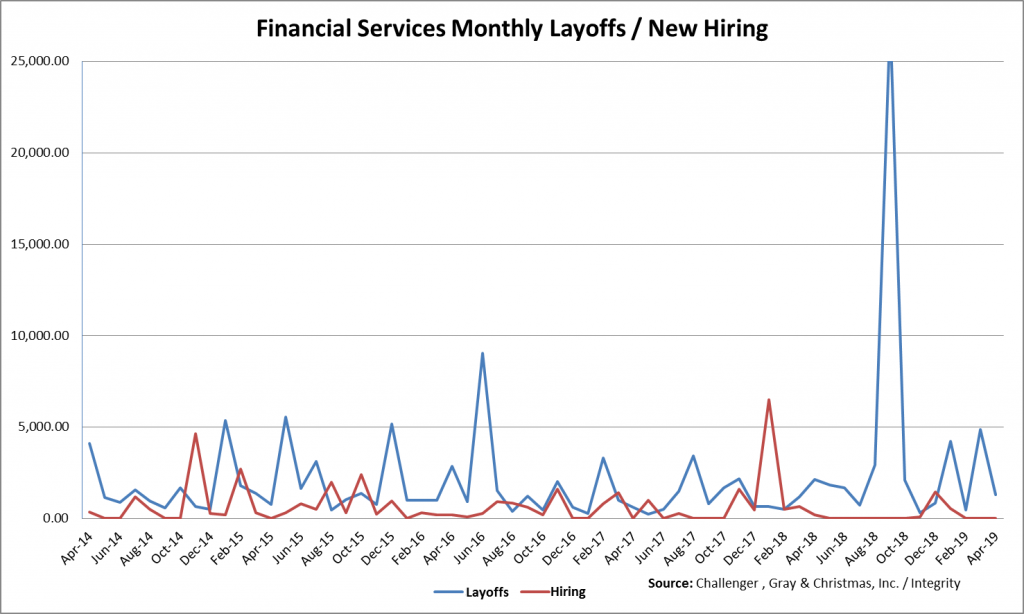 As you can see from the above chart, monthly layoffs continue to consistently run higher than new hiring.  In fact, over the past two years, monthly new hiring has exceeded layoffs only three times – in May of 2017, January of 2018, and December of 2018.  Consequently, new employment on Wall Street has actually shrunk by over 51,000 jobs over the past twenty-four months and by 46,500 jobs in the past year.  This data clearly reveals the underlying weakness of the employment outlook on Wall Street.

Last month, Cincinnati, Ohio-based Fifth Third Bank announced plans to lay off nearly 500 workers. These layoffs are part of the consolidation effort following Fifth Third’s announcement of a $4.7 billion deal in May 2018 to merge with Chicago-based MB Financial Bank.  As part of the merger executives estimated that up to 50 of the 239 bank branches could be closed in overlapping markets to save costs.

As mentioned a few weeks ago, French investment bank Societe Generale said it’s planning to cut 1,600 investment-banking jobs.  Most of the layoffs – close to 1,200 positions – will be positions at its global banking and investor solutions division.  The cuts follow CEO Frederic Oudea’s decision to abandon his growth goals for the bank.

Despite the improvement in layoffs in the April Challenger Gray & Christmas report, the overall jobs outlook on Wall Street remains fragile, as many executives continue to try and “right size” their operations in an effort to keep a tight control on costs given low interest rates, volatile commission revenue, and increased regulatory pressures.

These market conditions suggest that hiring in the research business is likely to remain restrained.  Although some investment banks might add analysts in high demand sectors like TMT and healthcare, we doubt most firms will aggressively expand the number of research analysts or salespeople on staff, particularly given the negative impact that MiFID II has had on top line research revenues at most research providers.