According to the September Challenger, Gray & Christmas monthly Job Cuts Report released last week, the financial services industry saw planned layoffs fall almost 36% to 1,691 layoffs in September from 2,638 layoffs recorded during the prior month.  The September layoff figure represents a 94% plunge from the 27,343 layoffs reported during the same month last year.  Over the first nine months of 2019, 19,417 layoffs have been recorded, 50% lower than the 38,935 layoffs seen during the same period of last year.

New hiring in September remained weak as financial services firms announced that no new jobs were available – the sixth time this has happened in 2019.  The September hiring total was the same as what was recorded during the same month of last year when no new jobs were available.  Over the first nine months of 2019, new hiring totaled 2,020 new jobs – 74% lower than the 7,854 new jobs on offer during the same period last year. 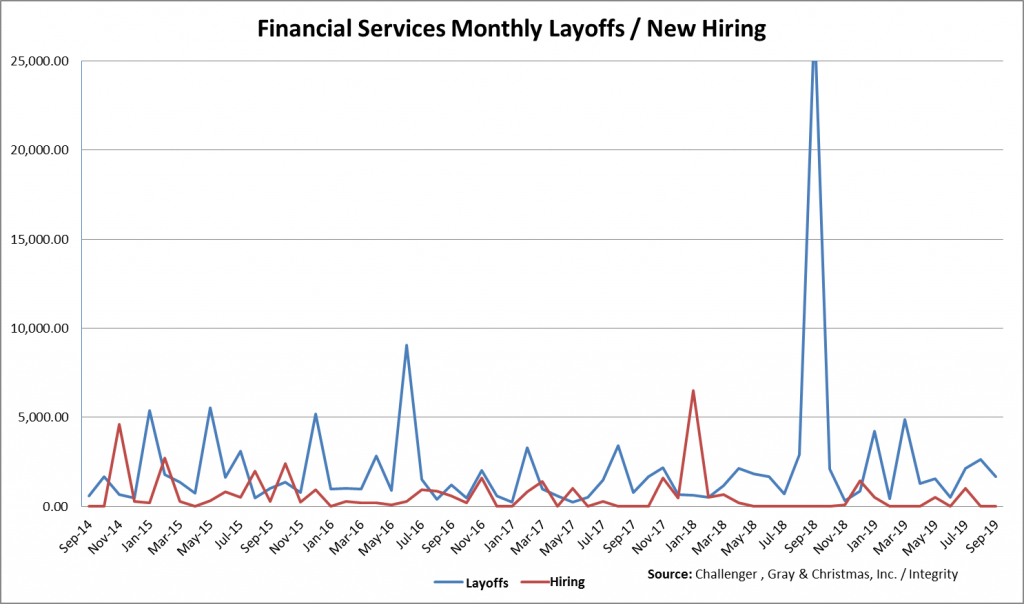 As you can see from the above chart, monthly new hiring continues to remain extremely weak.  According to the 12 month moving average for new hiring, hiring has dipped 64% from 826 new jobs in October 2018 to 296 new jobs available in September 2019.  As the chart above shows, although layoffs have trended lower in recent months, they remain consistently above new hiring.  Consequently, net employment continues to shrink on Wall Street.  In fact, over the past twenty-four months net new employment has dropped 52,674 as management continues to delay new hiring while they continue to try and reduce costs by shedding staff.

Last month, San Francisco-based discount broker Charles Schwab announced that it is laying off roughly 600 employees as recent Federal Reserve interest rate cuts have weighed on its banking business.  The job cuts amount to roughly 3% of the firm’s overall workforce and will impact offices nationwide.  Charles Schwab’s bank accounted for more than half of its roughly $10 billion 2018 revenue.

During September, Boston-based State Street Corp announced they plan to eliminate approximately 250 information technology positions in an effort to cut at least 2,300 jobs from higher cost locations.  So far, State Street has made more than 2,000 of its targeted 2,300 planned job cuts.  Recently, the company has been shifting headcount from higher cost U.S. and European cities to what it calls to “global hubs” in the lower-cost countries China, India and Poland.

Despite the drop in September layoffs, the continued lack of new hiring during the month is consistent with the nervousness felt by many financial services executives as difficult business conditions threaten their earnings outlook.  Given this bearish financial picture, we suspect that overall hiring by sell-side and independent research firms will continue to be weak for the foreseeable future.  In fact, we doubt that many firms will look to expand the number of research analysts or salespeople on their staffs; particularly given the negative impact MiFID II has had on revenues at most research providers.