According to the December Challenger, Gray & Christmas monthly Job Cuts Report released last week, the financial services industry saw planned layoffs surge 166% to 2,949 layoffs in December, marking the highest monthly layoff total since March 2019 when 4,884 layoffs were recorded.  The December layoff figure also represents a 250% surge from the 848 layoffs reported during the same month last year.  Over the course of 2019, 25,148 layoffs have been recorded, 40% lower than the 42,199 layoffs seen during 2018. 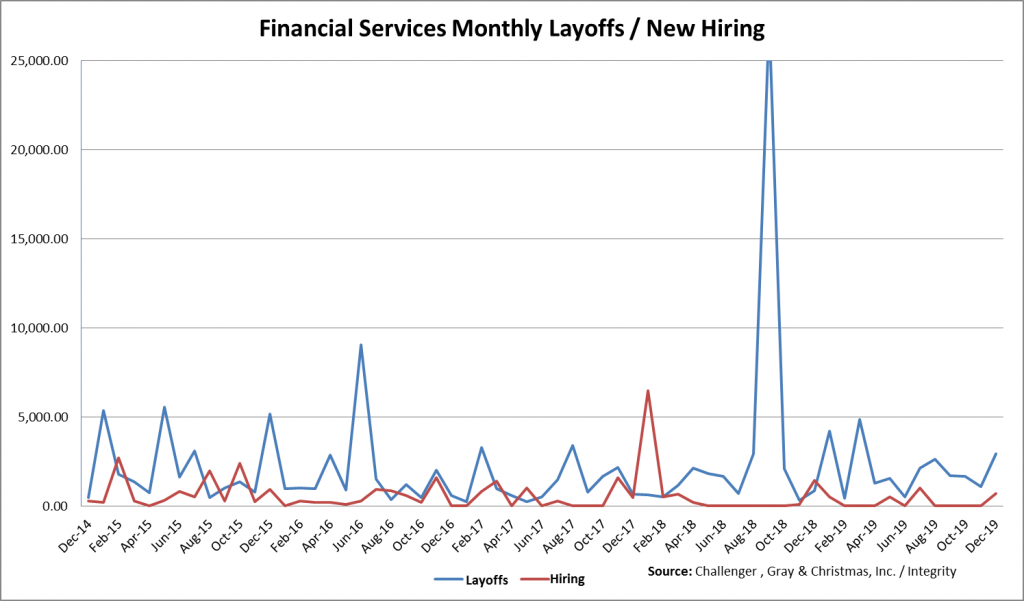 As you can see from the above chart, monthly layoffs have consistently run above new hiring reflecting the bearish sentiment among most bank executives.  Over the past two years, 67,347 people have been laid off from their positions at US financial institutions, while only 12,110 new jobs have been created to partially offset this reduction in staff.   Consequently, net new employment in the Financial Services industry has shrunk by 55,237 over the past twenty-four months as management continues to postpone hiring while they reduce costs by shedding staff.

During December, New York based investment bank Morgan Stanley announced that it is laying off roughly 1,500 employees globally across their technology, operations, sales, trading and research divisions.  These reductions were part of a year-end efficiency push and represents approximately 2% of the bank’s workforce.  The bank is reportedly planning to take a charge in the range of $150 million to $200 million in its fourth-quarter results tied to the cost of the cuts.

Despite the modest rise in December new hiring, the surge in layoffs during the month reveals that many financial services executives remain nervous as difficult business conditions threaten to dampen earnings.  Consequently, we expect that many firms will continue to shrink their payrolls – at least until their revenue outlook improves.

Given this bearish outlook, we suspect that overall hiring of analysts and salespeople by sell-side and independent research firms will remain weak for the foreseeable future.  In fact, we doubt that many firms will look to expand their staffs in the near-term – at least until they have greater confidence that their buy-side clients will pay them more for their various research and data services.