M Science, the alternative data research provider sold last year by ITG to Leucadia National, appears to be prospering under new management.  The firm has been adding staff, expanding its product line and coverage and diversifying into new market segments.

This month it launched an enhanced version of M Data – M Data E – which increased the periodicity of the data to daily and improved the data cleansing and modeling techniques to enhance data quality.  The firm is also developing an Excel plug-in for accessing the data to supplement its current API delivery.

M Science has also been expanding coverage from around 200 stocks when the firm was spun off to 310 currently.  It has added data and research on 26 UK consumer stocks in February and last week announced expanded tech sector coverage of companies supplying products for Android cell phones. 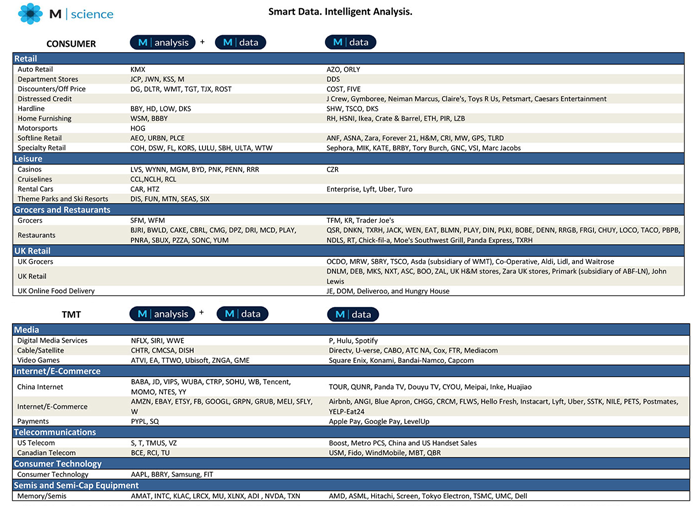 The firm’s tech company research is derived from US point of sale data combined China Android handset sales.  M Science uses component data at the device-level to parse the activation data, deriving revenue estimates for the suppliers of Android phone components.  The firm has used the same technique to launch coverage of semiconductor manufacturers.

An important initiative for M Science, like rivals such as 7Park Data and Earnest Research, is to diversify its business into the corporate sector, an effort that has become a higher priority since being spun out from ITG.  In April, the firm hired a former executive at market research firm GfK, Tom Dailey as its Head of Corporate Information Services.  It is also currently recruiting for a sales manager and a sales associate in its Corporate Information Services group.  M Science seems to be targeting consumer analysts within Telecommunications, Consumer and Restaurant companies particularly.

Founded in 2003, Majestic Research was a pioneer in the alternative data space, selling primary research based on large commercial databases which Majestic typically licensed on an exclusive basis.  Sectors covered include airlines, auto retail, casinos, consumer technology, cruise lines, eCommerce, homebuilders, and pharma & biotech.   Majestic added analysts to provide clients with insights based on the information, without buy/sell/hold recommendations, a formula which ITG continued.  The company is headed by Michael Marrale, who joined ITG as head of its Research, Sales & Trading group in 2012 from RBC Capital Markets.

An important measure of M Science’s renaissance is its staffing levels.  Employees registered on LinkedIn have expanded from 31 employees last May, when the company was sold by ITG, to 55 employees currently, a 77% increase.  Research headcount has grown 25%, sales by 50% and technology staff have doubled according to LinkedIn data.

This, combined with a more vibrant product line and expanded coverage, signals that M Science has gotten its mojo back, tapping its roots as a key pioneer in the alternative data space.