In an effort to inject more transparency into a very opaque market for research post-MiFID II, the second annual survey conducted by trade association Euro IRP sought to establish research pricing benchmarks.  Given differences in levels of research services, creating comparable prices is difficult, even among boutiques.  Nevertheless the survey results raise some questions about boutique pricing structures.

What the Buy-Side Values

Historically sell-side research providers have generally been price-takers because commission-based payments for research have been far more lucrative than offering a defined price structure. In our most recent pricing study conducted in early 2017, research providers who predominantly relied on clients to set the values on their research had average client payments nearly double those providers that mainly charged subscription fees and four times those relying on menu-priced research.

MiFID II attempted to force explicit pricing for research with limited success because most European long-only managers chose to opt out of the new rules by paying for research from their P&L.  Brokers set token subscription fees for access to written research to satisfy new regulatory requirements, while encouraging buy-side clients to continue to pay generously for higher-touch services through interactions data. 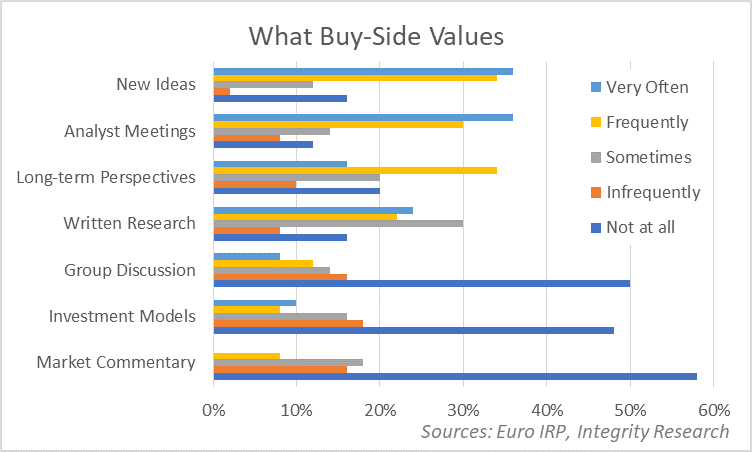 The recent Euro IRP survey polled boutiques on their experience with what asset managers find most valuable.  New investment ideas were ranked as ‘frequently’ or ‘very often’ valuable by 70% of respondents, followed closely by analyst meetings at 66%.  Investment models and market commentary were perceived to be the least valued.

UK regulators initially belittled the broker vote process, especially where payments generally followed commission volumes, handing windfalls to brokers during periods of rising market activity.  The buy-side has more uniformly adopted a process of setting defined values for votes to enforce consistency in payments, while generally ratcheting down payments as commission volumes have fallen.  In addition, many asset managers have integrated interactions data into the process, in some cases adopting ‘rate cards’ to value different forms of interactions such as analyst calls or conference attendance.

In its survey report, Euro IRP condemned the growing use of interactions data, arguing that the metrics place more value on quantity than quality:  “This ‘never mind the quality, feel the width’ approach obviously favours investment banks and larger brokers, who can issue a lot of product, and have the internal resources to provide the buy-side with every conceivable cut of usage statistics. Most IRPs don’t have such luxuries, and importantly, know one intelligent, well-based idea is worth more than a hundred ill-thought teenage scribblings.” 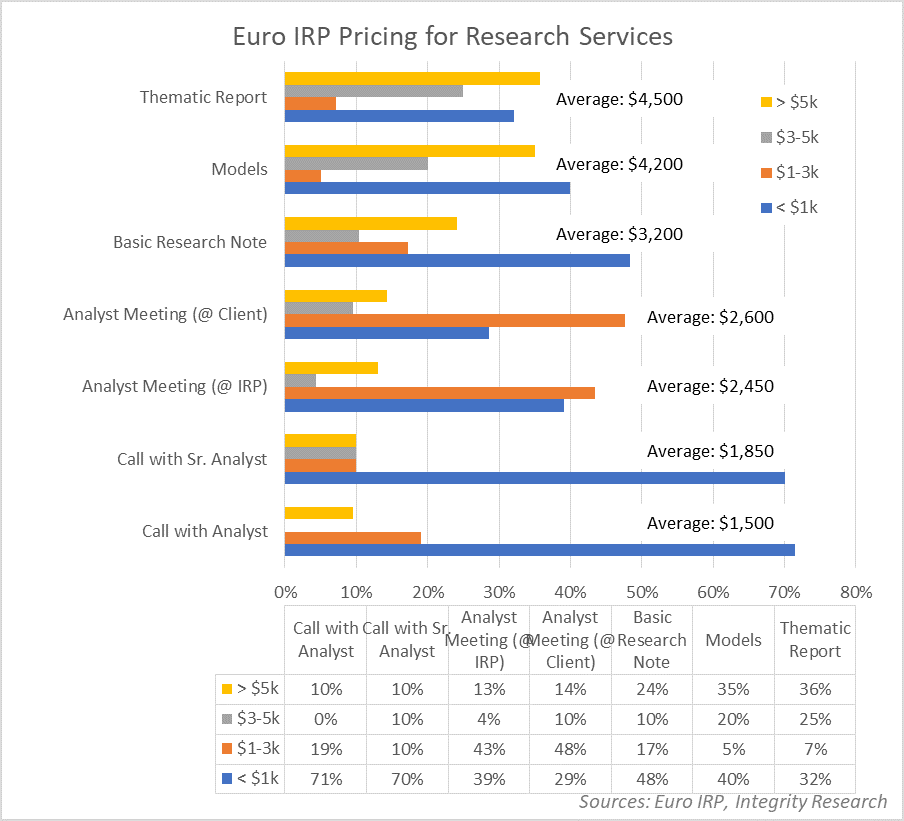 The lowest prices were reported for analysts meetings and calls with analysts.  Only 24% of respondents priced an analyst meeting at the client’s offices above $3,000 and 20% priced a call with a senior analyst above $3,000.  Average fees for analyst meetings with clients at their offices were $2,600 (in our experience clients rarely visit research providers.)  Calls with senior analysts averaged $1,850 and calls with regular analysts averaged $1,500. 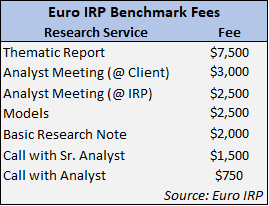 Euro IRP calculated an average price for an annual full research service provision from an IRP at $45,200.  In our most recent research pricing survey, the median fees charged by independents to an average buy-side client were $30,000 and the mean was just under $70,000.

Setting benchmark prices for specific interactions such as meetings or calls undercuts Euro IRPs ‘never mind the quality, feel the width’ criticism of the increasing use of interactions data in valuing research.  However, buy-side adoption of interactions data is widespread and therefore it may be more practical for independents to go with the flow rather than fight the tide.

We suspect that the survey averages for analyst access are in the ballpark for going rates.  Because expert network fees tend toward $1,000 for a one hour expert consultation, the buy-side is using that as a benchmark for analyst access — viewing analysts as yet another expert.  If so, charging a slight premium for analyst calls and a higher premium for visits has a market logic.  However, the survey fees associated with written research seem way out of line since many banks are pricing written research as marketing chum for higher touch services.

Pricing is an intrinsically complex and difficult topic and, given the opacity of the market, research pricing is only more so.  Euro IRP’s instinct to provide more transparency is well-founded, and we suspect it will resonate with a key audience for the study, namely regulators.