IDC Trackers provide market size, vendor share and forecasts for twenty-six segments of the technology sector including mobile phones, personal computing devices, software and services.  Each IDC Tracker provides market data for a specific technology or product across various dimensions (period, geography, vendor, segment, value, etc.). Coverage is global, including vendors in Asia and Europe as well as the US.  The trackers were first introduced in 1995 and the frequency is mainly quarterly or semi-annual, with some data provided monthly.

Wolfe Research’s quantitative team lead by Lin You analyzed the IDC Trackers as part of a broader technology industry model launched in November 2018.  Because technology firms might offer product lines covered by multiple trackers, Wolfe Research mapped the vendor data in IDC’s trackers to publicly listed companies. Among the trackers Wolfe used, they were able to map to about 300 listed technology companies globally. 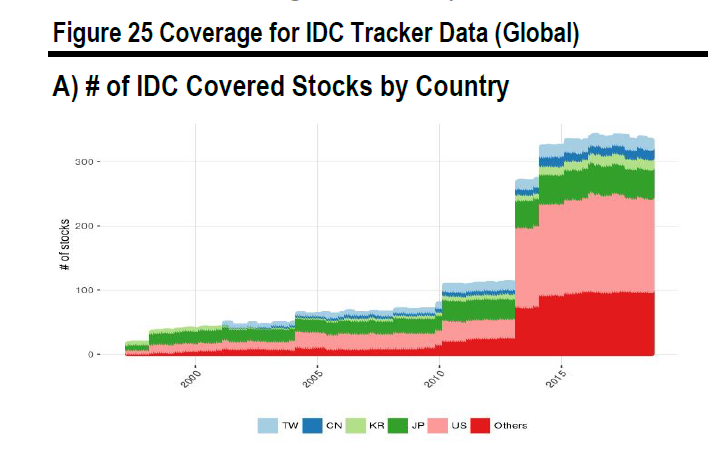 The tracker coverage improved significantly over time, especially after the Software & Services Tracker was added in 2012.  From only had a handful of stocks in the 1990s, the coverage increased to over 300 public companies in recent years, with most companies either based in the US and Asia, which is in line with overall global representation.

Wolfe Research used the IDC Tracker data as a proxy for revenue growth after aggregating the relevant vendor-level data for each publicly traded company.  The data generated a positive return in back-tested portfolios with an extremely low decay of the signal.  The report concluded that the signal should be particularly useful for long-only managers with long holding horizons.  Wolfe incorporated the IDC data into a model which added additional inputs from S&P Capital IQ’s industry-specific data, Google Trends, and Ravenpack’s news analytics.

Because of growing interest from quantitative funds, IDC has geared up its marketing efforts for the IDC Trackers.  IDC’s services already have a large footprint in the financial sector, with over 200 financial clients drawn primarily from the sell-side — including nine of the top ten investment banks — hedge funds and private equity firms.  The firm has fifteen staff dedicated to servicing the financial sector.

IDC’s trackers are not strictly alternative data since they aren’t derived from big data but, as Wolfe Research has shown, they hold interest for quants. Perhaps IDC will follow banks by integrating alternative data into its research going forward.  In the meantime, it is seeking to capitalize on the growing quantification of research by promoting its trackers to the broader quant community.