In a second annual survey conducted by trade association Euro IRP, the majority of members agreed that regulators should respond urgently to ‘predatory pricing’ by investment banks.  Despite this, the survey suggested that MiFID II impacts have been relatively modest so far and European boutiques generally have a bullish outlook.

In its report on the member survey, Euro IRP argued that opaque and cross-subsidized investment bank research pricing in the wake of MiFID II “continues to threaten an inducement risk for asset managers.”  The survey also sought to establish research pricing benchmarks to foster greater transparency for research fees.  We will examine the survey’s pricing metrics in a subsequent article. 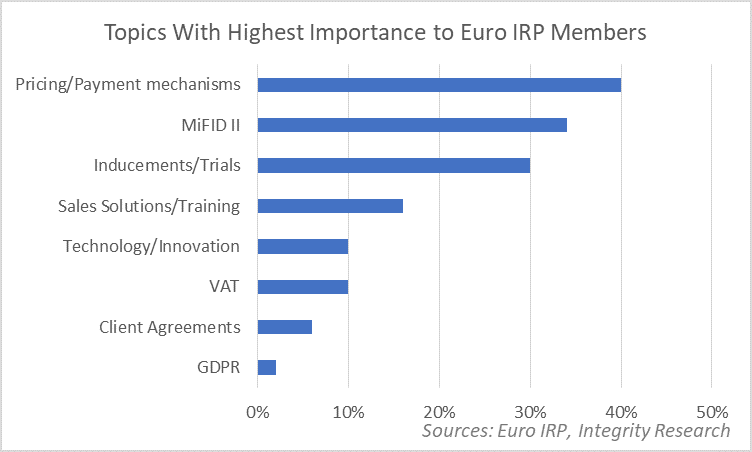 Although reluctant to directly criticize European regulators, Euro IRP described the post-MiFID II environment as “an ‘imperfect stasis’” where the European buy-side, confronted with “a complex hydra of rules,” developed a ’wait & see’ approach to research purchases while deciding to pay for research from the P&L with “no properly defined budget set beforehand.”  Downward pressure on sell-side research prices “often without the buy-side having to press too hard themselves” has given asset managers further incentive to delay purchasing decisions.

Compounding the problem has been “a shift of power away from PMs and buy-side analysts, and towards financial, data or legal authorities within a firm.  Research provider selection has morphed, to an extent, from a judgement call by the person actually using the service, to a purchase control process.”

Despite the toxic environment, boutiques participating in the Euro IRP survey reported only a moderate impact from MiFID II, so far.  At most, only 14% described “Quite a Lot” or “A Great Amount” of impact along any dimension.  Nevertheless, 74% of respondents experienced at least some detriment in renewal rates as European buy-side firms have cut back the number of research firms they use and 60% of respondents reported at least some impact on new business.  Vote-based revenues were less affected as a majority of respondents said there was no impact. 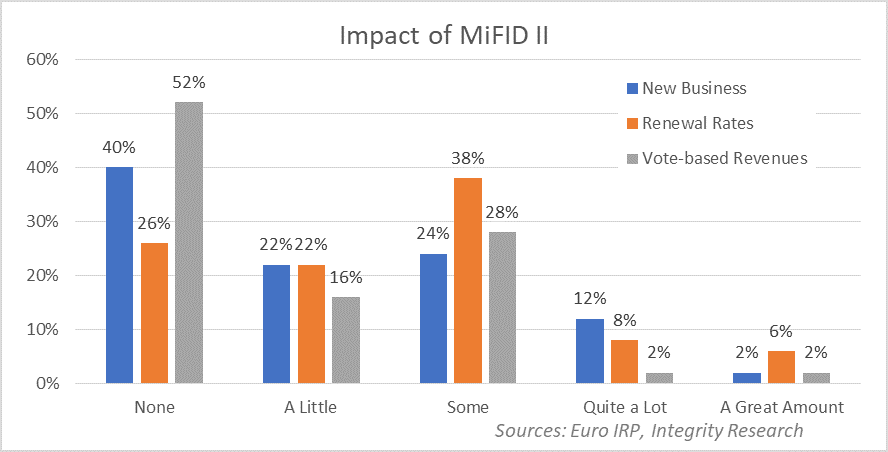 At the same time, boutiques are generally optimistic about their sales prospects over the next two years, with 74% anticipating increases in client levels and only 6% expecting declines in the number of clients. 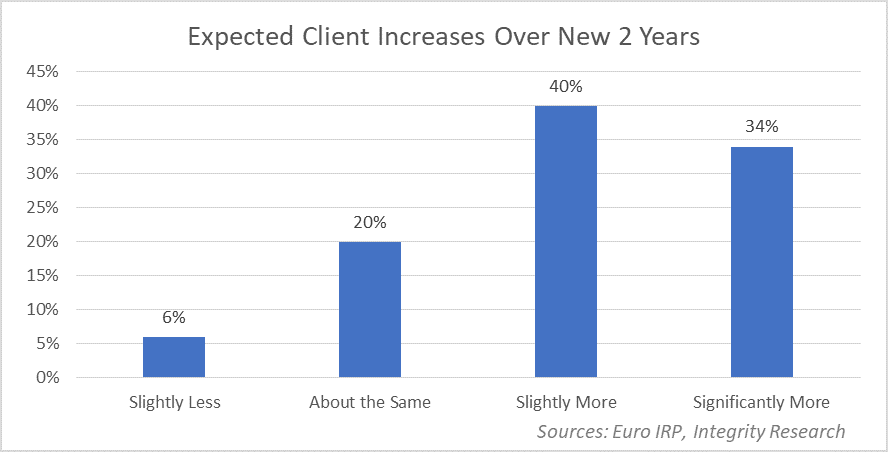 A majority of survey respondents also expected research pricing to rebound over the next five years, an improvement over the views expressed in last year’s survey.

Long-only funds, which have been most impacted by MiFID II unbundling regulation, are the largest client base for Euro IRP members according to the survey.  As our funding scorecards have illustrated, the majority of European long-only managers chose to fund research payments from their P&L, generating the ‘imperfect stasis’ described by Euro IRP.  In contrast, most European hedge funds have chosen to continue to pass on research costs to clients, as noted by Euro IRP in its report.  Hedge funds are a secondary market for Euro IRP members, although this may change post-MiFID II.

In aggregate, Euro IRP members have also diversified much of their client base away from MiFID II, with the US and Canada rivaling the UK in importance.  Given that MiFID II has had minimal impact on the US so far, we might expect continued diversification away from home markets in the future.

Bloomberg remains the most widely used distribution platform for Euro IRP members, with nearly 60% of survey respondents contributing research.  Thomson Reuters (soon to be rebranded as Refinitiv) was a distant second.  RSRCHXchange and ResearchPool are the most widely used of the new platforms spawned by MiFID II.

Euro IRP has been proactive in lobbying European regulators for relief from ‘predatory pricing’ by investment banks and in asking regulators to exempt them from MiFID II restrictions.  Regulators have not responded to date, but UK regulators have said they are initiating a review of MiFID II compliance.  The timing of the Euro IRP report coincides with the Financial Conduct Authority review, when the survey results might have the most impact.

Whenever research spending is cut deeply, as is the case among European long-only managers, small boutiques tend to suffer as more of the buy-side wallet gets shifted to protect the largest relationships.  We saw this in the US when commissions plummeted after the financial crisis and asset managers allocated a greater portion of their budgets to their main research providers, namely the largest banks with deepest research resources.

Nevertheless, boutiques have inherent advantages over large banks and brokers: research exclusivity, diversity, a lower expense base and a more nimble ability to adapt.  It appears that some of those attributes are already coming into play, as European boutiques diversify their business into regions less impacted by MiFID II and focus more on hedge funds who have largely chosen not to fund research payments through their P&L. As the dust settles in Europe, IRPs will be better positioned than many of their bank rivals: leaner, more nimble, and focused primarily on research.  The problem is that some of the smaller, weaker IRPs may not be around to benefit.