Thinknum, a leading source of web data, closed an $11.6 million Series A funding round.  The move signals Thinknum’s ambition to continue to aggressively scale its platform.

Thinknum will use the capital raise to fund additional growth. “With the new capital, we are planning on investing in product development, enhancing our data infrastructure and working with more investment firms to help educate them on alternative data,” said Justin Zhen, co-founder of Thinknum in an interview with Integrity Research.  The company’s last financing was in 2014 when it raised a $1 million seed round.  It says it has been cash flow positive since 2016.

Thinknum offers 70 datasets collected through web scraping and covers 400,000 public and private companies. The platform focuses on public data such as government contracts, product pricing data, store locations, as well as extensive social media data from sources such as LinkedIn, Twitter, Facebook, Instagram and Glassdoor.  Historical data goes back to 2015, depending on when Thinknum began collecting the data.

Data is organized by ticker, allowing users to cycle through various data sources relevant for a company, including employee registrations on LinkedIn, job listings, product discounts, and Facebook and Twitter followers, among other metrics.

Thinknum says it has over 150 firms as clients.  It primarily serves hedge funds, but has been expanding sell side usage over the last year.  According to Zhen, eight of the top ten investment banks are clients, and the company has been expanding usage within equity research, sales/trading, and investment banking. It recently began targeting corporates and is growing quickly in that segment, according to Zhen. The firm’s flat fee of $800 per user per month is priced to be broadly attractive across client groups.  The firm also offers a higher fee API option that is priced on a team to team basis.  The firm has more than doubled its top-line revenues in each of the past two years.

The company originated in 2014 as a financial model sharing site, similar in concept to GitHub which allows programmers to share open source code.  Zhen was previously a hedge fund analyst and co-founder Gregory Ugwi worked as a strategist at Goldman Sachs.  The two met while attending Princeton University.

The firm pivoted its product focus in 2015 from model sharing to gathering alternative data because hedge fund clients were asking for alternative data inputs for their models.  The firm is currently at 20 employees, primarily based in its NY offices.  The firm is recruiting for 10 open positions, including a head of sales, a head of marketing, another journalist (the firm already has 2) and an analyst to “communicate thought-provoking and original analytical findings” to clients and Thinknum’s media and marketing teams.

Beginning in 2018, Thinknum hired journalists including a former Wall Street Journal reporter to develop media articles based on data collected on its platform.  It maintains a dedicated website,  http://media.thinknum.com/, which includes topical articles drawn from social media and other data. 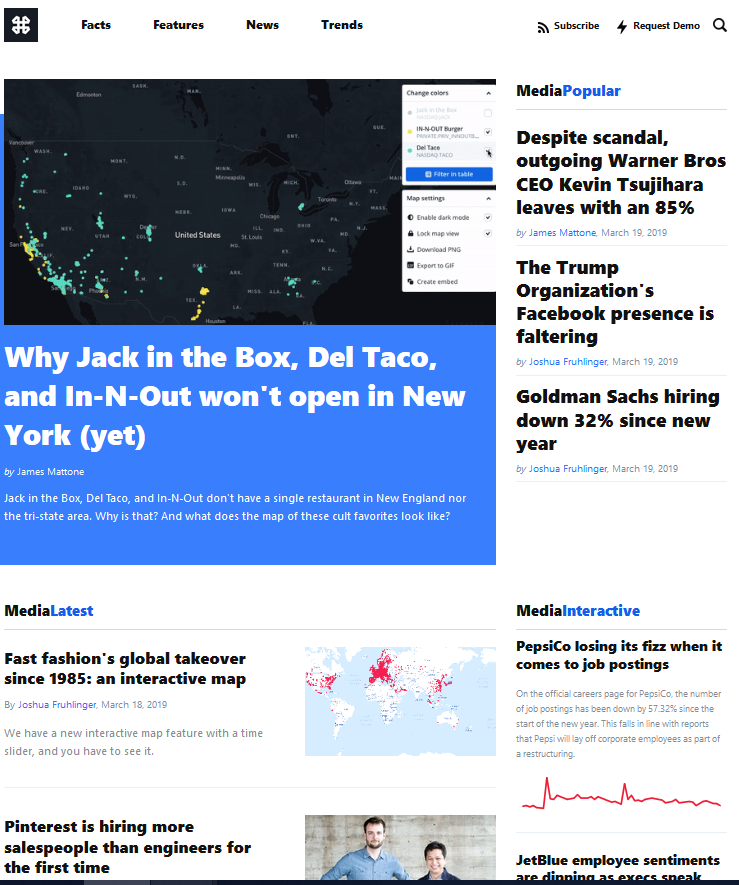 In September 2018, the company began distributing a subset of its data through Citi’s capital markets portal Velocity, which provides access to research, commentary, analytics and proprietary models.

The other leading source of web data is Yipitdata, which provides a deeper set of data for a narrower group of companies (around 70), focuses exclusively on the buy-side with a higher price point for its services, and recently launched a web scraping platform.    Yipitdata’s LinkedIn registrations are 5x larger than Thinknum’s.  It has raised about $7 million, the last raise being a Series B round in 2011.

Thinknum and Yipitdata have distinct business models and both appear to be thriving as web data is one of the most popular forms of alternative data.  The primary alternative for potential clients is to collect the data in-house.  There are a variety of platforms designed to facilitate web scraping including Connotate (recently acquired by Import.io), Mozenda, Ficstar, Datafiniti, as well as Yipitdata’s platform.

However, given the ephemeral nature of internet data, having historical datasets is a competitive advantage.  That, along with Thinknum’s ease of use and relatively low price point, are intended to discourage do-it-yourselfers.  With its recent funding and increasing focus on sales, marketing and PR, Thinknum aspires to be a broad-based brand for web-scraped data.