Paris-based research portal Alphametry is working to add a research management solution to its research aggregation platform as the firm continues to refine its business model and approach.

Alphametry’s platform is designed to organize, share and evaluate research received from any source, whether banks, independents or other sources.  Part of the organization process is labelling and tagging research.  The platform also allows clients to add notes and share research.  The service includes an evaluation tool which asks users questions to help them categorize research inputs as well as to assess the ‘analytic rigor’, investment conclusions, and other attributes of the research. 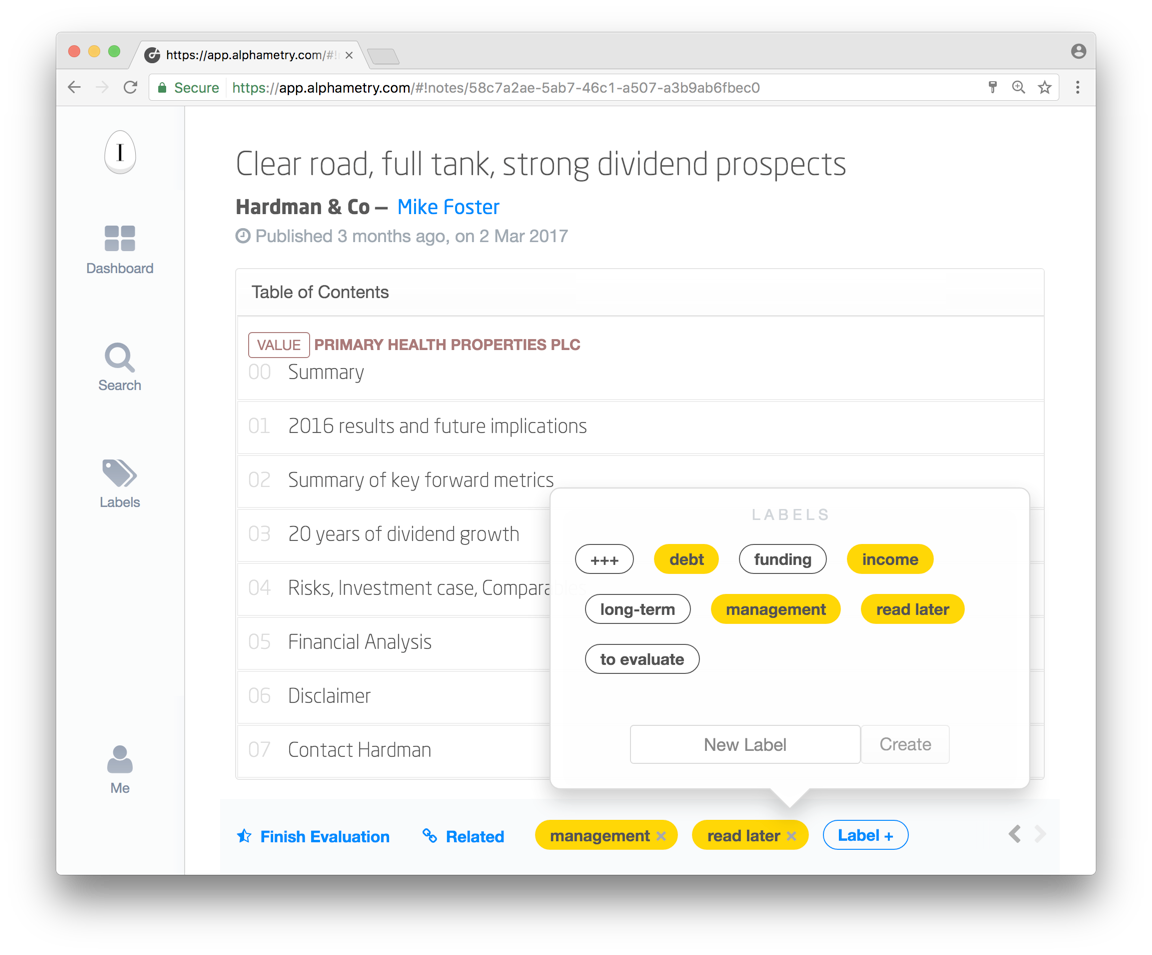 The assessments provided by users not only inform research valuation, but also help asset managers to determine whether the input might be deemed to be a ‘minor non-monetary benefit’ and thus exempt from MiFID II’s inducement rules.

One of the benefits of providing an internal buy-side solution is the ability to collect usage metrics which can be used in research valuation required under MiFID II.

“If you have the best research consumption analytics in the world but do not consolidate them exhaustively at the organization level it is pointless,” CEO Fabrice Bouland wrote in an email to Integrity Research. “To address this, the buy-side’s written research is consolidated from ‘inside’ – a one-off set-up solution where all documents are centralized in an internal dedicated server for us to access to normalize, classify and index the research.” 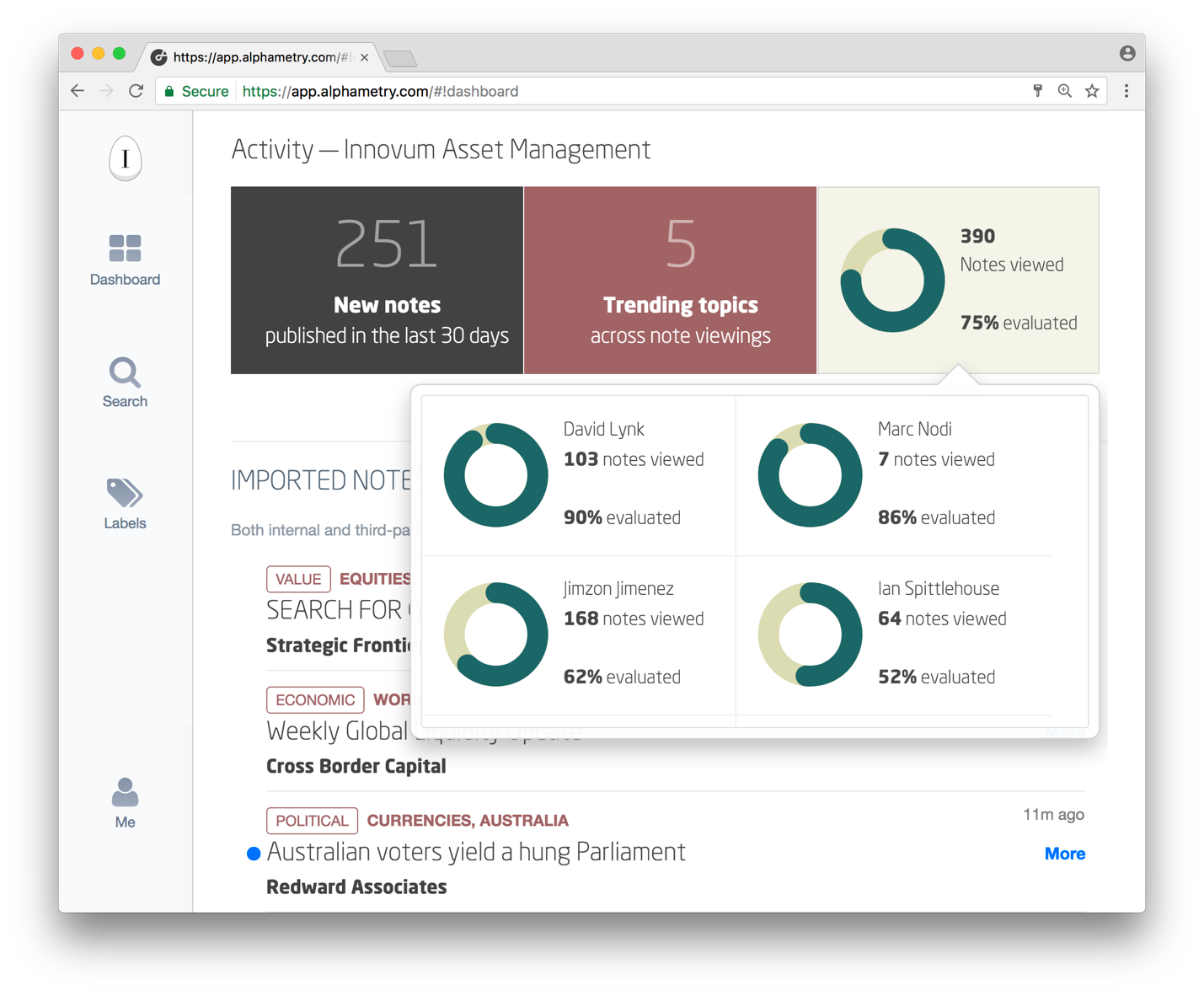 Alphametry’s business model is to charge the buy-side an annual license for the use of its software, with the fee depending on the number of users and the level of service provided.

Alphametry was started in 2014 by Fabrice Bouland, a former equity derivatives trader who founded OTCex, an inter-dealer broker specializing in index and single stock options.  The initial concept was for an online research marketplace which measures research performance by mapping each piece of research to the performance of the underlying stock.  A beta version of the platform was released in November 2015.  Six months later, Alphametry shifted its emphasis to providing usage metrics and analyst access.

Alphametry was one of the third-party providers recently integrated into Instinet’s research payment and commission management platform, which allows Alphametry users to seamlessly make research payments through Instinet.

Like the founders of the fourteen other research distribution platforms, Alphametry founder Bouland initially assumed that MiFID II would radically disrupt the current research distribution model.  In the event, the new regulation is not quite as transformative as originally expected, allowing asset managers to continue to purchase research using client commissions, although with significant new provisos.  Alphametry was quick to reorient away from intermediating research using a transactional model as many of the online research marketplaces attempt.

Its latest iteration is a logical extension of its focus on usage metrics.  The best way to collect usage metrics is by offer research management solutions, as Alphametry’s competitors Feedstock, which received funding in March, and Street Contxt, which received funding in April, have also surmised.  Hedge fund spinoff Red Deer, which recently partnered with Westminster Research Associates, has also entered the space.

Although the RMS space is getting increasingly crowded, it is not as choked as with the numerous online research marketplaces vying for attention.  Moreover, Alphametry has the advantage of being based on the European continent while most of its European competitors are based in the UK.